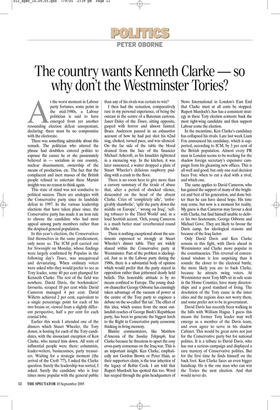 The country wants Kenneth Clarke — so why don’t the Westminster Tories?

At the worst moment in Labour party fortunes, some point in the mid-1980s, a Labour politician is said to have emerged from yet another resounding election defeat unrepentant, declaring: there must be no compromise with the electorate.

There was something admirable about this remark. The politician who uttered the phrase had doubtless entered politics to espouse the causes he or she passionately believed in — socialism in one country, nuclear disarmament, ownership of the means of production, etc. The fact that the complacent and inert masses of the British people refused to entertain these Marxist insights was no reason to think again.

This state of mind was not conducive to political success. There are analogies with the Conservative party since its landslide defeat in 1997. In the various leadership elections that have taken place since, the Conservative party has made it an iron rule to choose the candidate who had most appeal among party members rather than the despised general population.

In this year’s election, the Conservatives find themselves in the same predicament, only more so. The ICM poll carried out for Newsnight on Monday, whose findings were largely confirmed by Populus in the following day’s Times, was unequivocal and devastating. When ordinary voters were asked who they would prefer to see as Tory leader, some 40 per cent plumped for Kenneth Clarke. The rest of the field was nowhere. David Davis, the bookmakers’ favourite, scraped 10 per cent while David Cameron managed 4 per cent. David Willetts achieved 2 per cent, equivalent to a single percentage point for each of his two brains or, viewed from a slightly different perspective, half a per cent for each cranial lobe.

Earlier this week I attended one of the dinners which Stuart Wheeler, the Tory donor, is hosting for each of the Tory candidates, with the insouciant exception of Ken Clarke, who turned him down. All sorts of influential people were there: columnists, leader-writers, businessmen, party treasurers. Waiting for a strategic moment (the arrival of the Croft ’77), I asked the Clarke question. Surely the leadership was sorted, I asked. Surely the candidate who is four times more popular with the general public than any of his rivals was certain to win?

I then had the sensation, comparatively rare in my personal experience, of being the outcast in the centre of a Bateman cartoon. Janet Daley of the Times, sitting opposite, gasped with horror and almost fainted. Bruce Anderson paused in an exhaustive account of how he had just shot his 62nd stag, choked, turned puce, and was silenced. On the far side of the table the blood drained from the face of the financier Michael Ashcroft, as his knuckles tightened in a menacing way. In the kitchen, it was later rumoured, a waiter dropped a plate of Stuart Wheeler’s delicious raspberry pudding with a crash to the floor.

There is no room here to give more than a cursory summary of the tirade of abuse that, after a period of shocked silence, descended on the head of the absent Clarke. Cries of ‘completely idle’, ‘unforgivably shambolic’, ‘split the party down the middle on Europe’, ‘ wrong on Iraq’, ‘selling tobacco to the Third World’ and, in a loud Scottish accent, ‘Och, young Cameron is a much better man’ reverberated round the table.

There is nothing exceptional about the sentiments expressed so strongly at Stuart Wheeler’s dinner table. They are widely shared within the Conservative party at Westminster. Part of the problem is ideological. Just as in the Labour party during the 1980s, there is a substantial body of opinion which would prefer that the party stayed in opposition rather than jettisoned dearly held beliefs. This honorable attitude is by no means confined to Europe. The young shadow chancellor George Osborne has cunningly taken advantage of the vacuum of power at the centre of the Tory party to engineer a debate on the so-called ‘flat tax’. The effect of this idea, which comes from the most outlandish reaches of George Bush’s Republican party, has been to generate the biggest lurch to the Right in Conservative party economic thinking in living memory.

Blairite commentators, like Matthew d’Ancona of the Sunday Telegraph, fear Clarke because he threatens to upset the cosy cross-party consensus on the Iraq war. This is an important insight. Ken Clarke, emphatically not Gordon Brown or Peter Hain, as their supporters claim, is the true inheritor of the legacy of Robin Cook. I am told that Rupert Murdoch has spotted this too. Word has seeped through the grim headquarters of News International in London’s East End that Clarke must at all costs be stopped. Rupert Murdoch’s Sun has a consistent strategy in these Tory election contests: back the most right-wing candidate and then support Labour come the election.

In the meantime, Ken Clarke’s candidacy has collapsed his rivals. Late last week Liam Fox announced his candidacy, which is supported, according to ICM, by 3 per cent of the British population. Almost every PR man in London seems to be working for the shadow foreign secretary’s expensive campaign from his gleaming new offices. This is all well and good, but only one real decision faces Fox: when to cut a deal with a rival, and which one.

The same applies to David Cameron, who has gained the support of many of the brightest and best of his generation, and done better than he can have dared hope. His time may come, but now is a moment for reality. My guess is that Cameron may favour a deal with Clarke, but find himself unable to deliver his two lieutenants, George Osborne and Michael Gove. They are likely to favour the Davis camp, for ideological reasons and because of the Iraq factor.

Only David Davis and Ken Clarke remain in this fight, with Davis ahead in Westminster and Clarke more popular in the constituencies. This reversal of conventional wisdom is less surprising than it sounds: the closer to the electoral battle, the more likely you are to back Clarke, because he attracts swing voters. At Westminster most Tory MPs sit in safe seats in the Home Counties, have many directorships and a good standard of living. The desolation of the Tory cause in the inner cities and the regions does not worry them, and some prefer not to be in government.

David Davis has recently been walking in the hills with William Hague. I guess this means the former Tory leader may well emerge as a member of the Davis team, and even agree to serve in his shadow Cabinet. This would be great news not just for the Conservative party but for national politics. It is a tribute to David Davis, who has run a serious campaign and displayed a rare mastery of Conservative politics. But for the first time he finds himself on the back foot. Ken Clarke faces an even bigger handicap. He is the one man who can win the Tories the next election. And that would never do.