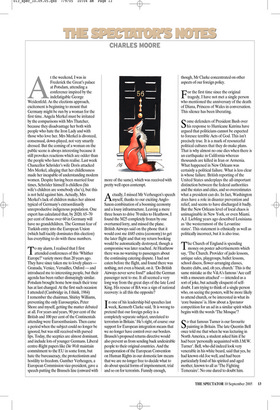 A t the weekend, I was in Frederick the Great’s palace

at Potsdam, attending a conference inspired by the indefatigable George Weidenfeld. As the elections approach, excitement is beginning to mount that Germany might be run by a woman for the first time. Angela Merkel must be irritated by the comparisons with Mrs Thatcher, because they disadvantage her both with people who hate the Iron Lady and with those who love her. Mrs Merkel is divorced, consensual, down-played, not very smartly dressed. But the coming of a woman on the public scene is always interesting because it still provokes reactions which are odder than the people who have them realise. Last week Chancellor Schröder’s wife Doris attacked Mrs Merkel, alleging that her childlessness made her incapable of understanding modern women. Despite having been married four times, Schröder himself is childless (his wife’s children are somebody else’s), but this is not held against him. Actually, Mrs Merkel’s lack of children makes her almost typical of Germany’s extraordinarily unreproductive indigenous population. One expert has calculated that, by 2020, 65–70 per cent of those over 60 in Germany will have no grandchildren. The German fear of Turkish entry into the European Union (which half-tacitly dominates this election) has everything to do with these numbers.

To my alarm, I realised that I first attended conferences of this ‘Whither Europe?’ variety more than 20 years ago. They have since taken me to lovely places Granada, Venice, Versailles, Oxford — and introduced me to interesting people, but their agenda has been rather dismayingly similar. Potsdam brought home how much their tone has at last changed. At the first such occasion I attended (Cambridge in, I think, 1984) I remember the chairman, Shirley Williams, preventing the only Eurosceptics, Peter Shore and myself, getting the matter debated at all. For years and years, 90 per cent of the British and 100 per cent of the Continentals attending were Euroenthusiasts. Then came a period when the subject could no longer be ignored, but was still received with pursed lips. Today, the sceptics are almost dominant, and include lots of younger Germans. Liberal centre-Right papers like Die Welt maintain commitment to the EU in some form, but hate the bureaucracy, the protectionism and hostility to freedom. Gunther Verheugen, a European Commission vice-president, gave a speech putting the Brussels line (onward with Actually, I missed Mr Verheugen’s speech myself, thanks to our exciting AngloSaxon combination of a booming economy and a lousy infrastructure. Leaving a mere three hours to drive 70 miles to Heathrow, I found the M25 completely frozen by one overturned lorry, and missed the plane. British Airways said on the phone that it would cost me £685 extra (economy) to get the later flight and that my return booking would be automatically destroyed, though a compromise was later reached. At Heathrow there was no warning to passengers about the continuing catering dispute. I had not eaten before the flight, and found there was nothing, not even a biscuit, on it. ‘Do British Airways never serve food?’ asked the German passenger next to me. It all seemed a very long way from the great days of the late Lord King. His rescue of BA was a sign of national recovery: is all this the opposite?

In one of his leadership bid speeches last week, Kenneth Clarke said, ‘It is wrong to pretend that our foreign policy is a completely separate subject, unrelated to terrorism in Britain.’ He’s right, of course: our support for European integration means that we no longer have control over our borders. Brussels’s proposed returns directive would also prevent us from sending back undesirable people to their original countries. And the incorporation of the European Convention on Human Rights in our domestic law means that we are no longer free to decide what to do about special forms of imprisonment, trial and so on for terrorists. Funnily enough, though, Mr Clarke concentrated on other aspects of our foreign policy.

For the first time since the original tragedy, I have not met a single person who mentioned the anniversary of the death of Diana, Princess of Wales in conversation. This silence has been liberating.

Some defenders of President Bush over his response to Hurricane Katrina have argued that politicians cannot be expected to foresee terrible Acts of God. This isn’t precisely true. It is a mark of resourceful political cultures that they do make plans. That is why almost no one dies when there is an earthquake in California whereas thousands are killed in Iran or Armenia. What happened in New Orleans was certainly a political failure. What is less clear is whose failure. British reporting of the United States underplays the all-important distinction between the federal authorities and the states and cities, and so overestimates what a president can do. In fact, Washington does have a role in disaster prevention and relief, and seems to have discharged it badly. But the New Orleans level of local chaos is unimaginable in New York, or even Miami. A.J. Liebling years ago described Louisiana as ‘the westernmost of the Levantine states’. This statement is ethnically as well as politically incorrect, but it is also true.

The Church of England is spending money on poster advertisements which say, ‘The Church. Provider of judo lessons, antique sales, playgroups, ballet lessons, school discos, flower-arranging classes, theatre clubs, and, oh yes, church.’ This is the same mistake as the V&A’s famous ‘Ace caff with a museum attached’ — intended as a sort of joke, but actually eloquent of selfdoubt. I am trying to think of a single person who, on seeing the posters, will be more likely to attend church, or be interested in what its ‘core business’ is. How about a Spectator competition for an ad in a similar spirit which begins with the words ‘The Mosque’?

So that famous Turner is our favourite painting in Britain. The late Quentin Bell once told me that when he was lecturing in North America, a student asked him if he had been ‘personally acquainted with J.M.W. Turner’. Bell, who did indeed look very venerable in his white beard, said that yes, he had known old Joe well, and had been particularly fond of his spirited and aged mother, known to all as ‘The Fighting Temeraire’. No one dared to doubt him.