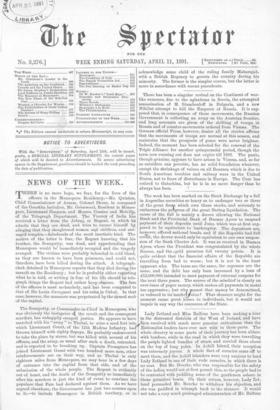 YEWS OF THE WEEK.

MHERE is no more hope, we fear, for the lives of the officers in the Muneepore Residency,—Mr. Quinton, Chief Commissioner of Assam, Colonel Skene, in conninand of the Goorkha battalion, Mr. Grimwood, Resident in Munee- pore, Lieutenant Simpson, and Messrs. Coseins and Melville, of the Telegraph Department. The 'Viceroy of India hits received a letter from the Jobraj, or Regent, in which he admits that they are dead, and tries to excuse himself by alleging that they slaughtered women and children, and out- raged temples,—falsehoods of the most inartistic kind. The motive of the letter is fear, the Regent knowing that his brother, the Senaputty, was dead, and apprehending that Muneepore would be immediately occupied and the tragedy avenged. The victims were probably beheaded in cold blood, as they are known to have been prisoners, and could not, therefore, have been killed during the attack. A telegraph- clerk detained in Muneepore reporte that they died during the assault on the Residency ; but he is probably either reporting what he is told, or writing in fear of his life should he tele- graph things the Regent had rather keep obscure. The fate of the officers is most melancholy, and has been compared to that of Sir Louis Cavagmtri and his suite in Cabul. In that ease, however, the massacre was perpetrated by the armed mob of the capital.