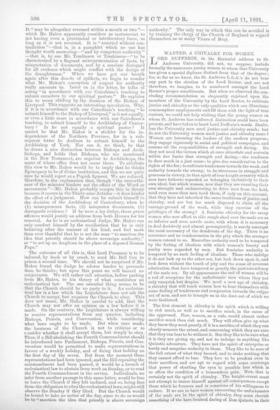 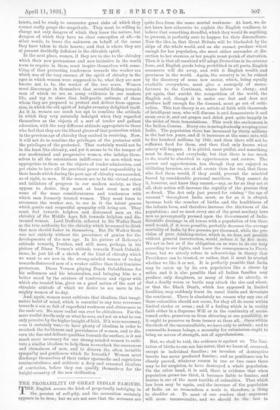 WANTED, A CHIVALRY FOR WOMEN.

LORD DUFFERIN, in his Rectorial address to St. Andrews University, did not, we suppose, include formally the numerous young women to whom that University has given a special diploma distinct from that of the degree ; for, so far as we know, the St. Andrews L.L.A.'s do not bear any part in the election of the Lord Rector, and are not therefore, we imagine, to be numbered amongst the Lord Rector's proper constituents. But when we observed the con- cluding recommendation so eloquently enjoined upon the members of the University by the Lord Rector, to cultivate justice and chivalry as the only qualities which can illuminate commonplace employments and fill them with the light of true content, we could not help wishing that the young women on whom St. Andrews has conferred distinction could have been present, and have taken to heart Lord Dufferin's words. Doubt- less the University men need justice and chivalry much; but do not the University women need justice and chivalry snore ? Women are becoming the leaders of the modern progress ; they engage vigorously in social and political campaigns, and assume all the responsibilities of strength and daring. Do they not need the virtues which at once stimulate and restrain within due limits that strength and daring,—the readiness to dare much in a just cause; to give due consideration to the rights of the foe; to cultivate tenderness towards the weak, and audacity towards the strong; to .,1N3 strenuous in struggle and generous in victory, in that spirit of true knight-errantry which men have hitherto regarded as belonging exclusively to their own ideal, but which women, now that they are vaunting their own strength and endeavouring to drive men from the field, need even more than men need them, if only on this account, that they have not inherited the same traditions of justice and chivalry, and are but too much disposed to claim all the vantage-ground of the weak, while they exercise all the privileges of the strong ? A feminine chivalry for the many women who now affect to ride rough-shod over the male sex as an inferior and even servile caste, with whom it is necessary to deal decisively and almost peremptorily, is surely amongst the most necessary of the desiderata of the day. There is no reverence and no condescension in the pity which the stronger women extend to us. Masculine audacity used to be tempered by the feeling of idealism with which women's beauty and purity were regarded by men. But feminine audacity is tempered by no such feeling of idealism. Those who indulge it do not look up to the other sex, but look down upon it, and look down without the touch of pity and the sense of reverent admiration, that have tempered so greatly the past ascendency of the male sex. By all appearances the rod of women will be a rod of scorpions for the unfortunate men whom they not only vanquish but despise. We need a new age of chivalry, a chivalry that will teach women how to bear themselves with some feeling of tenderness and compassion towards the vulgar sex of men, and not to trample us in the dust out of which we were fashioned.

The first element in chivalry is the spirit which is willing to risk much, as well as to sacrifice much, in the cause of the oppressed. Now, women, as a rule, would almost rather sacrifice much than risk much. They will often give up what they know they need greatly, if it is a sacrifice of which they can clearly measure the extent, and concerning which they are sure that they can bear to be without it. But they like to be sure what it is they are giving up, and not to indulge in anything like Quixotic adventure. They have not the spirit of enterprise or hardy and sanguine audacity in them. They like to be sure of the full extent of what they hazard, and to stake nothing that they cannot afford to lose. They love to be prudent even in their sacrifices, and are apt to regard with some contempt that power of shutting the eyes to possible loss which is so often the condition of a tremendous gain. Now, that is certainly not the spirit of chivalry. The knight-errant must not attempt to insure himself against all consequences except those which he foresees and is conscious of his willingness to endure. If we are to have women succouring the unfortunates of the male sex in the spirit of chivalry, they must cherish something of the hare-brained daring of Don Quixote in their

hearts, and be ready to encounter great risks of which they cannot really gauge the magnitude. They must be willing to Charge not only dangers of which they know the nature, but dangers of which they have no clear conception at all,—in other words, to brave the unknown on behalf of the cause they have taken to their hearts ; and that is where they are at present decidedly deficient in the chivalric spirit.

In the next place, women, if they are to rise to the chivalry which, their new pretensions and new initiative in the world seem to require in them, must inspire themselves with some- thing of that protecting tenderness towards the weaker sex which was of the very essence of the spirit of chivalry in the ages in which women were supposed to be, what they are now known not to be, the weaker of the two sexes. Women must discourage in themselves that scornful feeling towards men of which we see so many evidences in our modern life, and try to share that half-poetic estimate of those whom they are prepared to protect and deliver from oppres- sion, in which the old spirit of knight-errantry delighted itself. As it is, women are much too apt to combine the attitude in which they very naturally indulged when they regarded themselves as the objects of a sort of tender and gallant adoration, with the very different attitude appropriate to those who feel that they are the liberal givers of that protection which in the previous age of chivalry they exulted in receiving. Now, it will not do to combine the privileges of the protector with the privileges of the protected. That certainly would not be in the least like chivalry, and yet it seems to be the temper of our modernised and progressive women, who indulge them- selves in all the ostentatious indifference to men which was appropriate to them as the objects of tender admiration, and yet claim to have all the practical power and responsibility in their hands which during the past age of chivalry was accorded, as of right, to men. If the women are to be the virtual rulers and initiators of progress in our modern society, as they appear to desire, they must at least treat men with some of the same considerateness and tenderness with which men formerly treated women. They must learn to reverence the weaker sex, to see in it the latent graces which gentle and respectful sympathy will bring out. They must feel towards helpless and distressed men as the chivalry of the Middle Ages felt towards helpless and dis- tressed women. Lord Dufferin referred to Sir Walter Scott as the true authority for the chivalry which he seemed to think that men should foster in themselves. But Sir Walter Scott was not entirely without the prescience of genius for the developments of the new age. In his picture of Rebecca's attitude towards, Ivanhoe, and still more, perhaps, in his picture of Diana Vernon's attitude towards Frank Osbaldi- stone, he just hit off a sketch of the kind of chivalry which we want to see now in the strong-minded women of to-day towards distressed men of a weaker calibre than their feminine protectors. Diana Vernon pitying Frank Osbaldistone for his sullenness and his intoxication, and bringing him to a better mood by the mixture of tenderness and vigour with which she treated him, gives us a good notion of the sort of chivalric attitude of which we desire to see more in the mighty women of to-day.

And, again, women must cultivate that idealism, that imagi- native habit of mind, which is essential to any true reverence towards a sex so full of superficial weakness and obtuseness as the male sex. No mere realist can ever be chivalrous. For the mere realist dwells only on what he sees, and not on what he can only perceive by the higher insight of faith. If it were necessary, —as it certainly was,—to have plenty of idealism in order to overlook the feebleness and peevishness of women, and to dis- cern the fine and delicate qualities beneath the surface, is it not much more necessary for our strong-minded women to culti- vate a similar idealism to help them to overlook the coarseness and clumsiness of men, and to discern the often invisible sympathy and gentleness which lie beneath P Women must discharge themselves of their rather spasmodic and capricious senthnentalisms, and cultivate a deep and reasoned idealism of conviction, before they can qualify themselves for the knight-errantry of the new civilisation.