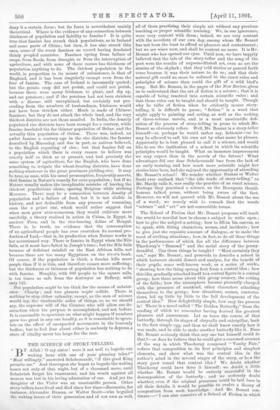 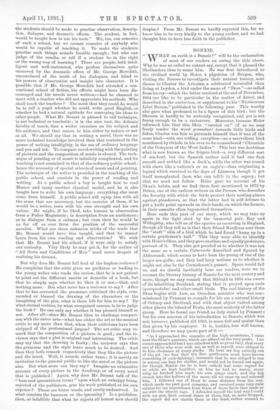 THE SCIENCE OF STORY-TELLING.

" BY Allah ! 0 my sister were it not well to beguile our waking hour with one of your pleasing tales?" "Most willingly," answered Scheherazade, "if this good King permits me." And thereupon she began to beguile the waking hours not only of that night, but of a thousand more, until Schahriah forgot his resentment, and his wrath against all women was lost in his loving admiration of ono. And yet the daughter of the Vizier was an unscientific person. Other story-tellers have lived and died since her time—Boccaccio, for instance, Alexandre Dumas, or Walter Scott—who beguiled the waking hours of their generation and of our own as well, all of them practising their simple art without any previous teaching or proper scientific training. We, in our ignorance, were very content with them; indeed, we are very content with the novelists of our own day, among whom Mr. Besant has not been the least to afford us pleasure and contentment ; but we are wiser now, and shall be content no more. It is Mr. Besant who has opened our eyes. Until now, we have happily believed that the tale of the story-teller and the song of the poet were the results of unpremeditated art, even as are the strains of the skylark ; that they told stories or poured forth verse because it was their nature to do so; and that their natural gift could no more be reduced to the exact rules and principles of science than could the gift of a wild bird's song. But Mr. Besant, in the pages of the New Review, gives us to understand that the art of fiction is a science ; that it is capable of being resolved into certain scientific rules ; and that those rules can be taught and should be taught. Though why he talks of fiction when he evidently means story- telling, it is difficult to guess; " fiction " is a word that might apply to painting and acting, as well as the writing of three-volume novels, and is a, most unscientific defi- nition of the process of story-telling in prose to which Mr. Besant so obviously refers. Well, Mr. Besant is a story-teller himself—or, perhaps he would rather say, fictionist—so he may be allowed to call his own art by what name he pleases. Apparently he is best pleased to call it a science, and would like to see the institution of a school in which its, scientific principles would be taught. What an immense improvement we may expect then in the novels of the future ! What advantages did :our dear Scheherazad6 lose from the lack of an early training, and how much more scientific might her stories have been, had she enjoyed the opportunity of attending Mr. Beeant's school ! We wonder whether Dumas or Walter Scott ever realised that "the idle trade of story-telling," as Mr. Hardy calls it, was really the practice of an exact science. Perhaps they practised a science, as the Bourgeois Gentil- homme talked prose, without being aware of the fact. However, we will not quarrel with Mr. Besant about the use of a word ; we merely wish to remark that the words " science " and " art " are not convertible terms.

The School of Fiction that Mr. Besant proposes will teach the would-be novelist how to choose a subject to write upon ; how to give the subject a setting; how to fill-in his canvas, so to speak, with fitting characters, scenes, and incidents; bow to give just the requisite amount of dialogue, or to make the most of striking situations ; how, in fact, to do all those things in the performance of which lies all the difference between Thackeray's " Esmond " and the serial story of the penny- dreadful. Can these things be taught? "Most certainly they can," says Mr. Besant; and proceeds to describe a school in which lecturers should dissect and analyse, for the benefit of their pupils, some well-known work, or a series of works, "showing how the thing sprang first from a central idea ; how this idea gradually attached itself to a central figure in a central group ; how there arose about this group scenery, the setting of the fable; how the atmosphere became presently charged with the presence of mankind, other characters attaching themselves to the group ; how situations, scenes, conversa- tions, led up little by little to the full development of the central idea." How delightfully simple, how easy the process ! There is a novel called "The Golden Butterfly," from the reading of which we remember having derived the greatest pleasure and amusement. Let us trace the course of that butterfly, through its stages of chrysalis and caterpillar, back to the first simple egg, and then we shall know exactly how it was made, and be able to make another butterfly like it. Does Mr. Besant seriously think that any one but himself could do that ?—or does he believe that he could give &reasoned account of the way in which Thackeray composed "Vanity Fair," reduce that composition to its first principles and simplest elements, and show what was the central idea in the author's mind in the several stages of the story, or how the story grew round that central idea ? We doubt whether Thackeray could have done it himself : we doubt a little whether Mr. Besant would be entirely successful in the decomposition of the butterfly : and we seriously doubt whether, even if the original processes ca lf ouldrb.eBlaeredanbtarT in

all their details, it would be possible to evolve a theory of composition from such knowledge. An

tinues :—" I can also conceive of a School of Fiction in which

the students should be made to practise observation, descrip- tion, dialogue, and dramatic effects. The student, in fact, would be taught how to use his tools." We, too, can conceive of such a school, but we cannot conceive of anybody who would be capable of teaching it. To make the students practise such things sounds feasible enough ; but who can judge of the results, or tell if a student be in the right or the wrong way of learning ? There are people, both intel- ligent and well-instructed, who profess themselves quite unmoved by the dramatic effect of Mr. George Meredith, unconvinced of the truth of his dialogues, and blind to 'his powers of observation and insight into character. It is possible that if Mr. George Meredith had attended a con- ventional school of fiction, his efforts might have been dis- couraged and his novels never written,—had he chanced to -meet with a teacher who did not appreciate his methods. Who aball teach the teachers ? The most that they could do, would be to tell a pupil whether he could write good English, or 'whether he had a natural aptitude for conveying his ideas to other people. What Mr. Besant is pleased to call technique, is not technical or teachable ; it is the nice tact, the delicate -faculty of touch, that a writer exercises on his subject and his audience, and that comes to him either by nature or not at all. We should say that in writing a novel, there was no more technical knowledge involved than that contained in the power of writing intelligibly, in the use of ordinary language and pen and ink. To compare novel-writing with the painting of pictures and the composition of music is absurd. The tech- nique of painting or of music is infinitely complicated, and its teaching is not contained in that of the ordinary public school : hence the necessity of special schools of music and of painting. The technique of the writer is provided in. the teaching of the public school, and consists in the power of reading and 'writing. At a public school a boy is taught how to read Homer and many another classical model, and he is also taught how to write his own language : everything else must 'come from himself. A public school will equip him with all the arms that are necessary, but the exercise of them, if he 'would be a writer, rests with his own strength and his own valour. He might, if he liked, take lessons in observation /from a Police Magistrate ; in description from an auctioneer ; or in dialogue from a cabman ; but even then he would be as far off as ever from the position of the successful novelist. What are these unknown tricks of the trade that Mr. Besant would have him taughi, and that he cannot learn from his own reading and observation P We wish that Mr. Besant had his school, if it were only to satisfy our curiosity. Very likely he may get it, for the author of 4' All Sorts and Conditions of Men" need never despair of realising his dreams.

But why does Mr. Besant fall foul of the hapless reviewer? He complains that the critic gives no guidance or leading to the young writer who reads the review, that he is not patient to point out the different merits or demerits of a book, but that he simply says whether he likes it or not,—that, and nothing more. But what more has a reviewer to say? After that he has corrected the grammar, criticised the style, com- mended or blamed the drawing of the characters or the imagining of the plot, what is there left for him to say ? By what eternal verities, by what recognised canons, is he to judge the book ? He can only say whether it has pleased himself or not. After all—since Mr. Besant likes to challenge compari- son with the sister arts—what has either the art or the musical critic to say more than that, when their criticisms have been stripped of the professional jargon? The art-critic may re- smash that the composition of a picture is good ; and the re- viewer says that a plot is original and interesting. The critic may say that the drawing is faulty ; the reviewer says that the grammar and the style leave much to be desired. And then. they both remark respectively that they like the picture and the novel. Well, it sounds rather tame ; it is merely an Invitation to the general public to like the novel or the picture also. But what more can they say P Imagine an exhaustive account of every picture in the Academy, or of every novel that is published ! Again, why does Mr. Besant talk of the "base and ignominious terms" upon which an unhappy being, rejected of the publishers, gets his work published at his own 'expense Those are bitter words, and surely undeserved. In what consists the baseness or the ignominy ? Is a publisher, then, so infallible that what he rejects all honest men should despise ? From Mr. Besant we hardly expected this, for we know him to be very kindly to the young author, and we had thought him to have less faith in the publisher.