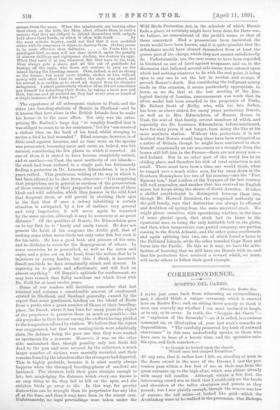 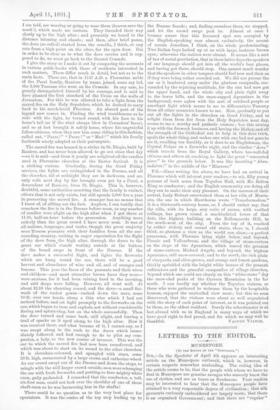 Florence, Eater Eve. I HAVE just come back from witnessing an extraordinary,. and, I should think, a unique ceremony, which is enacted here on Easter Eve; and, on sitting down quietly to think it over, can scarcely say whether I am most inclined to laugh, or to cry, or to swear. In truth, the " Scoppio del Carro "- or "explosion of the fireworks "—as it is called, is a curious comment on, or illustration of, your last week's remarks on Superstitions. "The carefully preserved dry husk of outward observance" in this case undoubtedly speaks, to those who' have ears to hear, of a heroic time, and the spectator rubs. his eyes, and feels somehow,— " As though he looked upon the sheath

Which once had clasped Excalibur."

At any rate, that is rather how I felt, as, standing at noon in the dense crowd in the nave of the Duomo, I saw the pro- cession pass within a few feet of me, on their way from the great entrance up to the high altar, which was ablaze already with many tall candles. Although within a few feet, the intervening crowd was so thick that I could only see the heads and shoulders of the taller choristers and priests as they passed; but I saw plainly enough, though the wearer was low of stature, the tall mitre—it looked like gold—which the Archbishop wore as he walked in the procession. Our Bishops,

am told, are wearing or going to wear them (heaven save the mark !), which made me curious. They threaded their way slowly up to the high altar ; and presently we heard in the distance intoning and chants; and then, after brief pause, the dove (so called) started front the crucifix, I think, at any rate from a high point on the altar, for the open door. But in order to be clear as to what the dove carries and is sup- posed to do, we must go back to the Second Crusade.

I give the story as I make it out by comparing the accounts in various guide-books with those of residents interested in such matters. These differ much in detail, but not as to the main facts. These are, that in 1147 A.D. a Florentine noble of the Pazzi family, Ranier° by name, joined, some say led, the 2,500 Tuscans who went on the Crusade. In any ease, he greatly distinguished himself by his courage, and is said to have planted the first standard of the Cross on the walls of -Jerusalem. For this he was allowed to take a light from the sacred fire on. the Holy Sepulchre, which he desired to carry back to his much-loved Florence. An absurd part of the legend now comes in. Finding the wind troublesome as he rode with the light, he turned round, with his face to his horse's tail (as if the wind always blew in Crusaders' faces), and so at last brought it safely home, where his ungrateful fellow-citizens, when they saw him come riding in this fashion, called out, " Pazzo !" " Pazzo !" or "Mad " which his family forthwith wisely adopted as their patronymic.

The sacred fire was housed in a shrine in St. Biagio, built by Raniero, and has never been allowed to go out since that day —so it is said—and from it yearly are relighted all the candles used in Florentine churches at the Easter festival. It is a striking custom. Gradually, during the Good Friday services, the lights are extinguished in the Duomo, and all the churches, till at midnight they are in darkness, and are only relit next day by fire brought even yet by a Pazzi, descendant of Ranier°, from St. Biagio. This is, however, -doubtful, some authorities asserting that the family is extinct, -others that it not only exists, but still spends 2,000 lire a year in preserving the sacred fire. A stranger has no means that I know of, of sifting out the fact. Anyhow, I can testify that somehow the fire is in the Duomo before noon, as any number -of candles -were alight on the high altar when I got there at 11.30, half-an-hour before the procession. Anything more orderly than the great crowd I have never seen. It was of all nations, languages, and ranks, though the great majority were Tuscan peasants with their families from all the sur- rounding country, waiting in eager expectation for the flight -of the dove from.the high altar, through the doors to the great car which stands waiting outside at the bottom of the broad steps in front of the Mimeo. If the -dove makes a successful flight, and lights the fireworks -which are hung round the car, there will be a good harvest and abundance of wine and oil, and of oranges and lemons. This year the faces of the peasants and their wives and children—and most attractive brown faces they were— were anxious, for it had been raining hard in the morning, and still drops were falling. However, all went well. At about 12.10 the chanting ceased, and the .dove—a small fire- work of the rocket genus—rushed down the nave, some 10 ft. over our heads, along a thin wire which I had not noticed before, and set light promptly to the fireworks on the -ear, which began to turn and explode, not without considerable fizzing and spluttering, but on the whole successfully. Then the dove turned and came back, still alight, and leaving a trail of sparks as it sped along, to the high altar. How it was received there, and what became of it, I cannot say, as I -was swept along in the rush to the doors which imme- .cliately followed, and had enough to do to pilot my com- panion, a lady, to the new centre of interest. This was the car to which the sacred fire had now been transferred, and which was about to start on its round to the other churches. It is chocolate-coloured, and spangled with stars, some

• 20 ft. high, surmounted by a large crown and catherine-wheel. As our crowd swept out of the Duomo and down the steps, to mingle with the still larger crowd outside, men were rehanging the oar with fresh fireworks, and putting-to four mighty white oxen, gaily garlanded. I remarked that the conductor, a tall, six-foot man, could not look over the shoulder of one of these shaft-oxen as he was harnessing him in the shafts !

There could be no question as to the very best place for spectators. It was the centre of the top step leading up to the Duomo façade; and, finding ourselves there, we stopped, and let the crowd surge past us. Almost at once I became aware that this favoured spot was occupied by the English-speaking race almost exclusively, the accent of cousin Jonathan, I think, on the whole predominating. Two Italian boys looked up at us with large, lustrous brown eyes ; otherwise the natives were absent. It seems like a sort of law of social gravitation, that in these latter days the speakers of our language should get into all the world's best places, and having got there, should stop. One pannot much wonder that the speakers in other tongues should feel now and then as if they were being rather crowded out, We did not pursue the car as it lumbered away under the glorious campanile, sur- rounded by the rejoicing multitude, for the sun had now got the upper hand, and the whole city and plain right away to the lower hills, and the snow-capped Apennines in the background, were aglow with the sort of subdued purple or amethyst light which seems to me to differentiate Tuscany from all other countries known to me, Now, gradually to put out all the lights in the churches on Good Friday, and to relight them from fire from the Holy Sepulchre next day, seems to me a worthy and pathetic custom ; but this mixing it up with the firework business, and having the Bishop and all the strength of the Cathedral out to help in this dove trick, spoils the whole thing, and makes one wish one had not gone to see it, recalling too forcibly, as it does to an Englishman, the Crystal Palace on a fireworks night, and the similar "dove" which travels from the Royal Gallery, where too-well-fed citizens and others sit smoking, to light the great "concerted piece" in the grounds below. It was like inserting " Abra- cadabra!" in the middle of the " Miserere."

P.S.—Since writing the above, we have had an arrival in Florence which will interest your readers,—to wit, fifty young persons of both sexes from Toynbee Hall, with Mr. Bolton King as conductor ; and the English community are doing all they can to make their stay pleasant. On the morrow of their arrival, Lady Hobart entertained them at her villa of Morita- uto, the one in which Hawthorne wrote "Transformation." It is a thirteenth-century house, or, I should rather say, that the villa, with its large, airy suite of rooms, with vaulted ceilings, has grown round a machicolated tower of that date, the highest building on the Bellosquardo Hill, to the south-west of the city. From the top of it, reached by rather rickety and casual old stairs, there is, I should think, as glorious a view as the world can show,—a perfect panorama, with Florence lying right below, and beyond, Fiesole and Vallombrosa, and the village of stone-cutters on the slope of the Apennines, which reared the greatest of stone-cutters, Michael Angelo, and beyond, the highest Apennines, still snow-covered; and to the north, the rich plain of vineyards, and olive-groves, and orange and lemon gardens, thickly sprinkled with the bright white houses of the peasant cultivators and the graceful campaniles of village churches, beyond which one could see clearly on this " white-stone " day the snow-clad peaks of the Carrara Mountains in the far north. I can hardly say whether the Toynbee visitors, or those who were gathered to welcome them by the hospitable hostess, enjoyed the unrivalled view most ; but this we soon discovered, that the visitors were about as well acquainted with the story of each point of interest, as it was pointed out to them, as the oldest resident. Surely the schoolmaster is at last abroad with us in England in many ways of which we have good right to feel proud, and for which we may well be