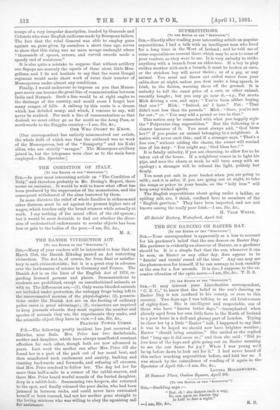 THE CONDITION OF ITALY.

[To THE EDITOR OF TEE " SPECTATOR:] Si,—In your most interesting article on "The Condition of Italy," and therefore probably in Mr. Dering's Report, there seems an omission. It would be well to know what effect has been produced by the suppression of the monasteries, and the consequent withdrawal of the alms bestowed by them.

In some districts the relief of whole families in sickness and other distress, must be set against the present higher rate of wages, which touches only the bread-winners while actually at work. I say nothing of the moral effect of the old system ; but it would be most desirable to find out whether the diver- sion of ecclesiastical endowments to secular objects has been loss or gain to the bodies of the poor.—I am, Sir, &o., IL A.