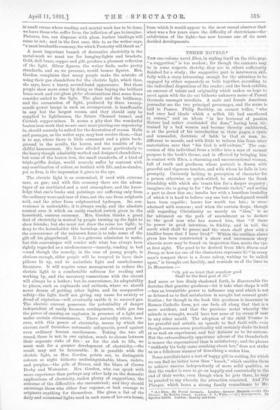 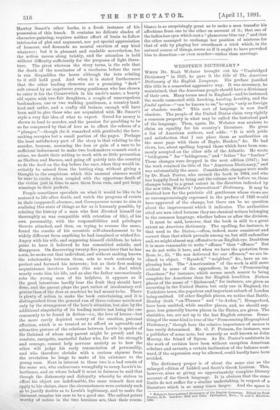 THE one-volume novel Rhea, in styling itself on the title-page "a suggestion," is too modest; for though the contents may be in some respects sketchy, they are in others sufficiently finished for a study; the suggestive part is interwoven skil- fully with a story interesting enough for the attention to be engaged by either separately or both together, according to the individual disposition of the reader; and the book exhibits an amount of talent and originality which makes us hope to meet again with the (to us) hitherto unknown name of Pascal Germain amongst novelists. A male and female American journalist are the two principal personages, and the scene is laid in Prance. Philip Boothby, an earnest trifler, "'who' had once had ideals• which a selfish life had smothered in senses," and on whom "in her bestowal of passion Nature had rather overloaded the dose," having been vic- timised by a bad woman and become thereby embittered, is at the period of his introduction in these pages, a cynic and sensualist, destitute of faith in God or man, in- different to morals, and with little to redeem him from utter materialism save that "his God is self-culture." The con- version of this individual from a trifler into a man of earnest purpose is the book's theme, and is effected by bringing him in contact with Rhea, a charming and unconventional woman, Lull of truth and goodness, whose portrait is drawn with graceful and vigorous touches, and with whom he falls in love promptly. Curiously lacking in perception of character for a person otherwise so quick-witted, he mistakes the frank friendship with which she treats him for a deeper coquetry ; imagines she is going in for "the Platonic racket," and acting a part to draw him on ; insults her with a heartless brutality of which it is bard to believe any one but a blackguard would have been capable ; learns her worth too late; is over- whelmed with remorse ; and when the curtain drops, though still regarding Christianity as merely an "idea," is so far advanced on the path of amendment as to declare to the good nun who has nursed him, that "if there be power in good intention, in fidelity, and in toil, the north wind shall be purer, and the stars shall glow with a kindlier beam that I have lived." Within the outlines above given has been constructed a short and uncommon story wherein more may be found on inspection than meets the eye at first sight. The good to be derived from life's ShIrIn um? Drang, or how (as one of the characters expresses it) "in every man's tempest there is a Jesus asleep, waiting to be called upon," is brought out forcibly, and reminds us of the lines in In Monoricm

"Oh yet we trust that somehow good Shall be the final goal of ill."

And more or less dimly shadowed forth, is discoverable the doctrine that genuine goodness—let it take what shape it will —has an irresistible power to influence any soul which is not so debased as to find satisfaction in naught but sensual grati- fication; for though in the book this goodness is incarnate in Roman Catholic form, yet one feels all along that that is a mere accident, and that the precious metal whereby the miracle is wrought, would have lost none of its virtue if cast in any other mould. The adoption of the child Yvonne is too graceful and artistic an episode to find fault with, even though common-sense practicality will certainly shake its head. at so rash an experiment, and feel dubious as to its success. But the extraordinarily opportune advent of the thunderbolt is nearer the supernatural than is satisfactory; and the phrase- " suddenly his body came crushing about her," does not strike us as a felicitous manner of describing a stolen kiss.

Some novelists have a sort of happy gift in writing, for which we can find no better term than "knack," which enables them to achieve success independently of more solid qualities, so that the reader is sure to go on happily and contentedly to the end of their works, even though when he gets there, he may be puzzled to say wherein the attraction consisted. And The Plunger, which bears a strong family resemblance to Mr.

Hawley Smart's other books, is a fresh instance of his possession of this knack. It contains no delicate shades of character-painting, requires neither effort of brain to follow intricacies of plot and argument, nor yet special appreciation of humour, and demands no mental exertion of any kind whatever; but it is pleasant and readable nevertheless, for the action moves along briskly, and the attention is held without difficulty sufficiently for the purposes of light litera- ture. The pivot whereon the story turns, is the rule that the death of the nominator of a racehorse before the race is run disqualifies the horse although the bets relating to it still bold good. And when it is stated furthermore that the other leading elements are a promising " dark " colt owned by an impetuous young gentleman who has chosen to enter it for the Csesarewitch in his uncle's name, a hearty old squire with two fair daughters, a couple of unscrupulous bookmakers, one or two walking gentlemen, a country land- lord and ostler, and a crafty old trainer, enough will have been said to give those who are acquainted with Mr. Smart's style a very fair idea of what to expect. Greed for money is shown to lead to murder, and the passion for gambling to be so far conquered by that of love as to effect the reform of a

plunger,"—though (be it remarked with gratitude) the love- making occupies but a small portion of the pages. Perhaps the least satisfactory part of the story is that relating to the murder, because, assuming the loss or gain of a race to be sufficient inducement to make two bookmakers commit such a crime, we doubt their setting to work with so little precaution as Shelton and Barnes, and going off quietly into the country to do the deed on the day before the race, when they would in- evitably be missed from the betting ring, without giving a thought to the suspicions which this unusual absence would be sure to excite when coupled with the opportune death of the victim just in time to save them from ruin, and put large winnings in their pockets.

People sometimes speculate on what it would be like to be restored to life after death, and watch the progress of events in their (supposed) absence; and Consequences seems to aim at realising this state of things as far as is humanly possible, by relating the history of a man who first divested himself (as thoroughly as was compatible with retention of life), of his own personality, with the responsibilities and privileges thereto attached, and then, on trying to resume the same, found the results of his eccentric self-abandonment to be widely different from anything he had imagined or wished for. Angry with his wife, and supposing himself childless, he takes pains to have it believed he has committed suicide, and disappears. On discovering.twentyfive years later that he has a son, he seeks out that individual, and without making known the relationship between them, seta to work zealously to protect and forward his interests ; but as their first making acquaintance involves Lewis (the son) in a duel which nearly costs him his life, and as also the father unconsciously robs the young man of his ladylove, it appears as if the good intentions hardly bear the fruit they should have done, and the parent plays the part rather of involuntary evil genius than of the deus ex machind he had meant to be. There is plenty of action to make the book entertaining, and it is distinguished from the general run of three-volume novels not only by the strangeness of the hero's situation, but also by the additional singularity of its leading motive not being the one commonly to be found in fiction—i.e., the love of lovers—but the more rarely depicted variety of the emotion, paternal affection, which is so treated as to afford an agreeable and attractive picture of the relations between Lewis (a species of Sir Galahad of whom any parent might be proud) and the resolute, energetic, masterful father who, for all his strength and courage, cannot help nervous anxiety as to how the other will judge his early renunciation of personality, and who therefore shrinks with a curious shyness from the revelation he longs to make of his existence to the young man. Next in interest to these two is a bad cousin of the same sex, who endeavours wrongfully to usurp Lewis's in- heritance, and on whose behalf it must in fairness be said that though the dishonesty and disloyalty whereby he strives to effect his object are indefensible, the same remark does not apply to his claims, since the circumstances were certainly such as to justify doubts as to Lewis's legitimacy, and to make the claimant imagine his case to be a good one. The salient points worthy of notice in the two heroines are, that their resem-

blance is so surprisingly great as to make a man transfer his affections from one to the other on account of it; that one of the ladies has eyes which east a" glamorous blue ray ;" and that the other managed to exchange her position of mistress for that of wife by playing her sweetheart a trick which, in the natural course of things, seems as if it ought to have provoked him to desertion—or even murder—rather than marriage.