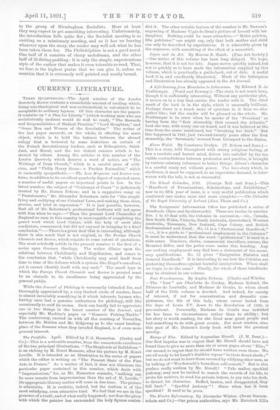 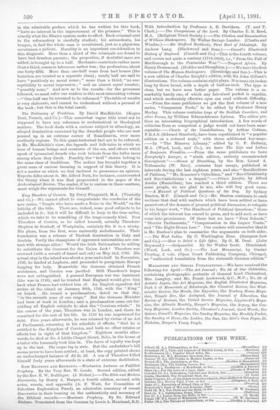 book, "have no interest in the improvement of the prisoner." This is exactly what the Elmira system seeks to effect. Each criminal sent to the reformatory is carefully studied ; his antecedents, his temper, in fact the whole man is scrutinised, just as a physician scrutinises a patient. Heredity is an important consideration in this diagnosis. More than a third of the criminals are found to have had drunken parents ; the• proportion, if doubtful cases are added, is brought up to a half. Mechanics contribute rather more than a third, common labourers rather less ; the professions, about one forty-fifth. More than one-half come from bad homes (the homeless are treated as a separate class) ; nearly half are said to have "positively no moral sense ; " more than a third, "no sus- ceptibility to moral impression ; " and an almost equal number, "possibly none." And now as to the results—for the processes followed, we must refer our readers to this most interesting volume —" One-half can be assumed to be reformed." The table of results is very elaborate, and cannot be understood without a perusal of the book ; but this is the total result.