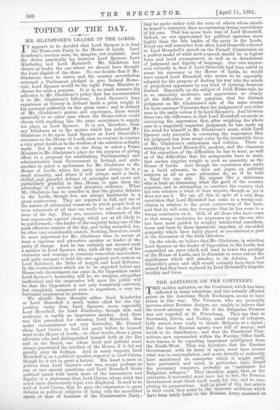 MR. GLADSTONE'S LEADER IN THE LORDS.

IT appears to be decided that Lord Spencer is to lead the Home-rule Party in the House of Lords. Lord Rosebery's services were, we imagine, not available. And the choice practically lay between Lord Spencer, Lord Kimberley, and Lord Herschel]. Mr. Gladstone has chosen as leader the one whom we should have thought the least eligible of the three. No one doubts that if Mr. Gladstone were to retire, and the country nevertheless returned a Parliament pledged to give Ireland Home- rule, Lord Spencer would be the right Prime Minister to choose for such a purpose. It is in no small measure his adhesion to Mr. Gladstone's policy that has recommended it to Mr. Gladstone's followers. Lord Spencer's long experience as Viceroy in Ireland lends a great weight to his personal authority on this great issue ; and in default of Mr. Gladstone's genius and experience, there would assuredly be no other man whom the Home-rulers could choose with anything like the same acceptance to supply his place, as Lord Spencer. It is not, therefore, from any blindness as to the motive which has induced Mr. Gladstone to fix upon Lord Spencer as Lord Granville's successor in the House of Lords, that we venture to express a very great doubt as to the wisdom of the selection actually made. But it seems to us one thing to select a Prime Minister in Mr. Gladstone's place for the purpose of giving effect to a proposal for establishing Parliamentary and administrative local Government in Ireland, and quite another to select a spokesman for Mr. Gladstone in the House of Lords, where his party must always be in a small minority, and where it will always need a lucid, skilful, and graceful defence of principles and views not particularly grateful to that House, to gain them the advantage of a serious and attentive audience. What Mr. Gladstone has to consider is, that the greater debates in the Lords, though few, are always landmarks in a great controversy. They are reported in full, and are of the nature of ceremonial occasions to which people look as terse rehearsals of all that can really be said on the chief issue of the day. They are, moreover, rehearsals of the best arguments against change which are at all likely to be put forward,—the leader of the majority being one of the most effective orators of the day, and being seconded, too, by other very considerable orators. Nothing, therefore, could be more important for Mr. Gladstone than to secure at least a vigorous and attractive speaker as leader of the party of change. And he has certainly not secured such a speaker in Lord Spencer, who, with all the weight of his character and courage, is certainly somewhat inarticulate, and quite unequal to hold his own against such orators as Lord Salisbury, the Duke of Argyll, and Lord Selborne. In the controversies which are to be expected before any Home-rule Government can come in, the Opposition under Lord Spencer's leadership will be, we imagine, altogether ineffectual, and the impression left upon the public will be that the Opposition is not only completely outvoted, but completely conquered even in argument, a very un- fortunate impression to produce. We should have thought either Lord Kimberley or Lord. Herschell a much better chief for the Op- position ranks than Lord Spencer, more especially Lord Herschel, for Lord Kimberley, though able and moderate, is hardly an impressive speaker. And there was this precedent for choosing Lord Herschell, that under circumstances not very dissimilar, Mr. Disraeli chose Lord Cairns to lead his party before he himself went to the House of Lords,—in other words, chose a great advocate who had distinguished himself both at the Bar and on the Bench, one whose lucid and judicial mind always penetrated the intellect of the House, if it did not greatly sway its feelings. And in many respects Lord Herschel' is, as a political speaker, superior to Lord Cairns, though he is not so great a lawyer. His heart is more in politics than Lord Cairns's ever was, except perhaps on one or two special questions, and Lord Herschell treats political issues with much more of the earnestness and dignity of a statesman than Lord Cairns, whose mind was much more distinctively legal, ever displayed. It used to be said of Lord Cairns, that he gave the impression in great debates on political subjects of being only the accredited agent or man of business of the Conservative Party; that he spoke rather with the voice of others whose minds he hoped to interpret, than as expressing strong convictions of his own. That has never been true of Lord Herschel.

Indeed, no one appreciated his political speeches more highly than the late leader of the party in the Lords. Every one will remember how often Lord Granville referred to Lord Herschell's speech on the Parnell Commission as a perfect model of what such a speech should be in logical force and lucid arrangement, as well as in detachment of judgment and dignity of language. Our own impres- sion certainly is, that if Lord Granville had been asked to name his successor in the House of Lords, he would have named Lord Herschel, who seems to be especially adapted for the purpose of finding his way into the minds of prejudiced opponents by any kind of opening, however limited. Especially on the subject of Irish Home-rule, he. is so eminently moderate, and appreciates so clearly all the difficulties of the question, that his distinct judgment on Mr. Gladstone's side of the issue counts for more amongst Unionists than the judgment of any other man in the party unless it be Lord Spencer's. And between these two the difference is, that Lord Herschel succeeds in conveying the impression that, after weighing the whole case in a singularly impartial judgment, he has made up his mind for himself in Mr. Gladstone's sense, while Lord Spencer only succeeds in conveying the impression that his judgment has been swept away by the irresistible force of Mr. Gladstone's enthusiasm and volition. There is something in Lord Herschell's candour, and the clearness of his exposition of the difficulties he has to rabet, as well as of the difficulties that his antagonists have to meet, that carries singular weight in such an assembly as the House of Lords. And though his reputation was made as a lucid advocate, he does net argue on political subjects at all as some advocates do, as if he held a brief for one side. He argues like a statesman who is bent on discerning what the good of the country requires, and in attempting to convince the country that his own solution is what it does require, though as yet it does not see it. We say all this in spite of a very deep conviction that Lord Herschell has come to a wrong con- clusion in relation to the great controversy of the hour, and that he will some day recognise that he has come to a wrong conclusion on it. Still, of all those who have come to that wrong conclusion, he impresses us as the one who has been most guided by weighty intellectual considera- tions, and least by those spasmodic impulses of one-sided sympathy which have lately played so pre-eminent a part in the discussion of the Irish Question.

On the whole, we believe that Mr. Gladstone, in selecting Lord Spencer as the loader of Opposition in the Lords, has committed an error which will tend to lower the prestige of the House of Lords, and. to diminish to some extent the significance which still attaches to its debates. Lord Granville's grace and skill would certainly have been less missed had they been replaced by Lord Herschell's singular lucidity and force.