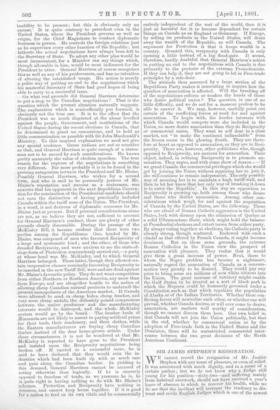 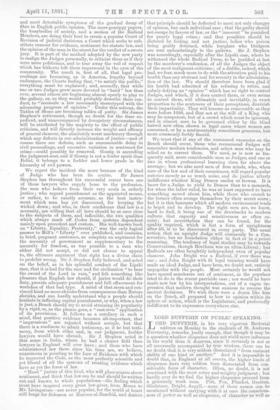 WE cannot record the resignation of Mr. Justice Stephen. with any sense of pleasure, or even of relief. It was announced with much dignity, and in a scene of a certain pathos ; but we do not know why a Judge still young for his position—eixty-two—and suffering mainly from habitual overwork, should not have received a year's leave of absence in which to recover his health, while we do see that the incident will increase the tendency to dis- trust and revile English Judges which is one of the newest and most detestable symptoms of the gradual decay of fibre in English public opinion. The more gossippy papers, the busybodies of society, and a section of the Radical Members, are doing their best to create a popular Court of Revision of judicial decisions, a Court which seeks to sub- stitute rumour for evidence, sentiment for statute law, and the opinion of the man in the street for the verdict of a sworn Jury. It is part of the method adopted by the new party to malign the Judges personally, to criticise them as if they were mere politicians, and to tear away the veil of respect which has hitherto left them impersonal in the eyes of the community. The result is, first of all, that legal pro- ceedings are becoming, as in America, lengthy beyond endurance, the Courts feeling that, "to satisfy the public," everything must be explained ; and, secondly, that while one or two Judges grow more devoted to "hard " law than ever, several others are beginning almost openly to play to the gallery, or, as they would probably describe their con- duct, to "reconcile a law necessarily stereotyped with the advancing progress of opinion." Under this solvent, the Tables of Stone are becoming tables of putty. Sir James Stephen's retirement, though no doubt for the time ex- pedient, and unaccompanied by derogatory circumstances, will be attributed by the majority to the effect of public criticism, and will directly increase the weight and efficacy of general clamour, the absolutely worst machinery through which any defects in our administration of justice—and of course there are defects, such as unreasonable delay in civil proceedings, and excessive variation in sentences for crime—could possibly be removed. Gossip is ascending the judgment-seat, and if Gossip is not a fouler spirit than Belial, it belongs to a feebler and lower grade in the hierarchy of evil powers.

We regret the incident the more because of the kind of Judge who has been its centre. Sir James Stephen has throughout his successful career been one of those lawyers who supply bone to the profession, the men who believe from their very souls in orderly justice ; who regard punishment as the appointed means, or rather, to be exactly accurate, as the best instru- ment which man has yet discovered, for keeping the wicked down ; and who, in their confidence that law is a necessity, are willing that all laws should be at once clear to the subjects of them, and inflexible, the two qualities which always mark off Codes from systems dependent mainly upon precedent and custom. His well-known book on "Liberty, Equality, Fraternity," was the only logical answer to Mill's " Liberty " ever published, and contains, in brief, pregnant sentences, as complete an argument for the necessity of government as supplementary to the necessity for freedom, as was possible to a man who either did not accept, or did not choose to appeal to, the ultimate argument that right has a divine claim to prohibit wrong. Sir J. Stephen fully believed, and acted on the belief, as hi his splendid conduct of the Lipski case, that it is bad for the race and for civilisation "to bear the sword of the Lord in vain," and felt something like pleasure that English law should, if juries would do their duty, provide adequate punishment and full effacement for wretches of that bad type. A mind of that stern and con- vinced kind no more shrinks from consequences than Nature shrinks, and can hardly understand why a people should hesitate in inflicting capital punishment, or why, when a law is just, a Bench should try to avoid straining its popularity by a rigid, or, as the phrase goes, a " cast-iron " application of its provisions. It follows as a corollary in such a mind, that positive evidence becomes all-important, that " impressions " are rejected without scruple, but that there is a readiness to admit testimony, so it be but testi- mony, from which older and, in our judgment, feebler lawyers would ha.ve shrunk. Sir J. Stephen acted in this sense in India, where he had a clearer field than lawyers in England will ever have ; and those who have administered law there since his time are, we believe, unanimous in pointing to the Law of Evidence with which he improved the Code, as the most perfectly scientific and yet liberal of all the systems of treating evidence which have as yet the force of law. "Hard" jurists of this kind, who will place reason above sentiment, and think that law can be and should be written out and known to whole populations—the feeling which must have inspired every great law-giver, from Moses to Mr. Livingstone—are never popular, for the world at heart still longs for Solomon or Harouu-al-Raschid, and desires that principle should be deflected to meet not only changes of opinion, but each individual ease; that the guilty should not escape by favour of law, or the " innocent" be punished for purely legal crime ; and that penalties should be dictated by feeling and not justice, ladies who poison being gently detained, while burglars who bludgeon are sent unhesitatingly to the gallows. Sir J. Stephen was accordingly, especially after the Lipski case, where he withstood the whole Radical Press, to be justified at last by the murderer's confession, of all the Judges the object of the most malignant criticism ; of a dislike, indeed, which had, we fear, much more to do with the attention paid to his health than any abstract zeal for serenity in the administra- tion of the law. We should therefore have been glad if his health had admitted of his refusing to retire, and calmly defying an" opinion" which has no right to control Judges, and which, if it does control them, or even seems to control them, will ultimately and inevitably, in exact proportion to the acuteness of their perceptions, diminish their impartiality. They will become as removeable as they were before 1688, and that not at the will of a King who may be competent, but of a crowd which must be ignorant, and is almost sure to be governed either by the blind hatred now often shown in legal cases where women are concerned, or by a sentimentality sometimes generous, but more commonly feebly flaccid.

We trust that if any of the rumoured vacancies on the Bench should occur, those who recommend Judges will remember modern tendencies, and select men who may be relied on to correct them. We need, as is now so fre- quently said, more considerable men as Judges, and one or two in whom professional learning rises far above the average ; but we also need men of firm minds, who, when sure of the law and of their consciences, will regard popular outcries merely as so much noise, and do justice utterly indifferent whether King Demos smiles or frowns. It is baser for a Judge to yield to Demos than to a monarch, for when the latter ruled, he was at least supposed to have something sacred about him, while those who crouch to the former often avenge themselves by their secret scorn ; but it is this baseness which all modern environment tends to beget and to develop. The right men are, we know, hard to find, it being one of the drawbacks to modern culture that capacity and sensitiveness so often co- exist ; but nevertheless they can be found, for the quality required, which is but a form of uprightness after all, is to be discovered in every party. The usual notion that an upright Judge will commonly be a Con- servative, has no foundation either in fact or in a priori reasoning. The tendency of legal studies may be towards Conservatism, though Bentham was an ultra-Liberal; but Radicals are often haughtily independent even of popular clamour. John Bright was a Radical, if ever there was one ; and John Bright with fit legal training would have made an ideal ;Judge, and have been, we doubt not, entirely unpopular with the people. Most certainly he would not have spared murderers out of sentiment, as the populace tried to do in the recent parricide case ; nor would he have made new law by his interpretations, out of a vague im- pression that modern thought was anxious to reverse the ancient decisions. We wish there were a dozen like him on the Bench, all prepared to bow to opinion within its sphere of action, which is the Legislature, and profoundly indifferent to its expression everywhere else.