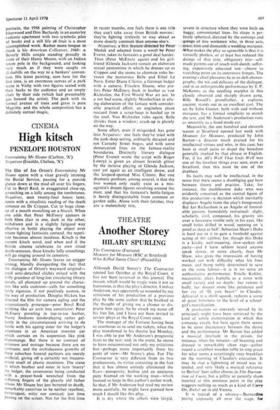 The film of Joe Orton's Entertaining Mr Sloane opens with a vicar gravely intoning the Burial Service, pausing for a peevish glance down at the mud all over his fingers. Cut to Beryl Reid, in exaggerated close-up, scrunching on a lolly among the tombstones. Negatives, seen twenty-four hours later, opens with a ritualistic reading of the death sentence on Dr Crippen. Cut to huge close- up of a mouth munching on a biscuit. When one adds that Peter McEnery appears in both films (fair in one, dark in the other, withdrawn and in a slightly fatigued way effective in both) playing the object over whom fighting fantasists contend, the repeti- tion becomes almost insidious. Kitsch is the current kitsch word, and when and if the British cinema celebrates its own ritual death-sentence, these kitschy lolly crunchings will go ringing around its cemetery.

Entertaining Mr Sloane leaves no snigger unsnug, blandly disregarding the fact that the dialogue of Orton's wayward original— staid semi-detached clichés mixed with the frilly grandeur of long-lost circulating library novels, all plumped up around the charac- ters like sofa cushions—calls for something fairly rigorous, if not positively austere, in the way of production. Douglas Hickox has directed the film for camera ogling and the ostentatiously grotesque—poor Beryl Reid writhing like an arch boa constrictor, Peter McEnery prowling in top-to-toe leather, Harry Andrews (underplaying rather gal- lantly in the circumstances) arriving to do battle with his ageing sister for the lodger's attentions in an American monster car which curtsies on its suspension like pink blancmange. But there is no contrast of primness and outrage because there are no contrasts; and the orchidaceous growths of these suburban funeral parlours are merely artificial, giving off a certainly not inappro- priate smell of plastic mustiness. The scene in which brother and sister in turn 'marry' the lodger, the ceremonies being conducted with a prayer-book wrenched from the stiffening fingers of the ghastly old father Whom Mr Sloane has just battered to death, remarkably contrives to be neither repellent, extravagant, witty nor comical; just time Passing on the screen. Not for the first time

in recent months, one feels there is one title they can't take away from British movies: they're fighting tirelessly to stay ahead as more sheerly common than anyone else's.

Negatives. a-first -feature directed by Pater Medak and adapted from a novel by Peter Everet, takes its fantasies a good deal harder. Theo (Peter McEnery again) and his girl- friend (Glenda Jackson) sustain an elaborate sexual pantomime in which he dresses up as Crippen and she seems to alternate roles be- tween the monstrous Belle and Ethel Le Neve. Enter Diane Cilento, a German lodger with a camera, Fraulein Sloane, who pre- fers Peter McEnery back in leather as von Richtofen, the First World War air ace. In a not bad scene, slightly Murdochian in ally- ing elaboration of the fantasy with consider- able practical effort, an engineless plane rescued from a scrap-heap is hauled up to the roof. Von Richtofen rides again; Belle shrieks from a window; crack-up is plainly on the way.

Some effort, even if misguided, has gone into Negatives: one feels they've tried with the junk-shop setting, ordinarily decayed and not Camaby Street bogus, and with some demarcation lines on the fantasy-reality boundaries. Distinctly literary dialogue (Peter Everett wrote the script with Roger Lowry) is given an almost feverish glitter by the incisive playing of Glenda Jackson, cast yet again as an intelligent shrew, and the leopard-spotted Miss Cilento. But one dramatic problem, among several, is that the two women only really exist as a mis- ogynist's dream figures revolving around the man; and that his fantasist's battle-fatigue is barely distinguishable from common or garden sulks. Alone with their fetishes, they are a melancholy trio,