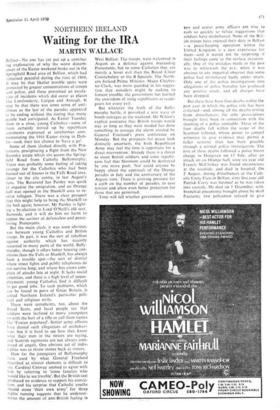 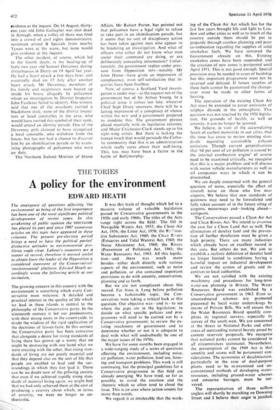 Waiting for the IRA

ances of the Easter weekend broke out in the Springfield Road area of Belfast, which had remained peaceful during the riots of 1969, It may be that likelier trouble spots were protected by greater concentrations of troops and police, and these prevented an escala- tion of incidents which did occur at places like Londonderry, Lurgan and Armagh. It may be that there was some sense of anti- climax as the last of the parades appeared to be ending without the rioting that many people had anticipated. As Easter Tuesday drew to a close, young Catholics—some of them certainly stirred up by republican sentiments expressed at ceremonies com- memorating the 1916 Easter rising in Dub- lin—took their last chance to 'have a go'.

Some of them clashed directly with Pro- testants, precipitating a flight from the New Barnsley estate which sits across the Spring- field Road from Catholic Ballymurphy. There was probably some feeling of taking revenge for the Catholics who had been burned out of houses in the Falls Road area, closer to the city centre, in last August's riots. The Reverend Ian Paisley was quick to organise the emigration, and an Orange hall was opened in the Shankill area to re- ceive refugees. There was a clear prospect that this might help to bring the Shankill to the boil again; however, Mr Paisley is fight- ing a by-election in Lord O'Neill's old seat, Bannside, and it will do him no harm to appear the saviour of defenceless and peace- loving Protestants.

But the main clash, it was soon obvious, was between young Catholics and British troops. In part, it was the sort of rebellion against authority which has recently occurred in many parts of the world. Bally- murphy, though it offers better housing con- ditions than the Falls or Shankill, has always been a trouble spot—the sort of district where street lights and public telephones do not survive long, and where bus crews com- plain of attacks late at night. It lacks social amenities, and there is a high level of unem- ployment; young Catholics find it difficult to get good jobs. To such problems, which can be found in parts of Great Britain, is added Northern Ireland's particular poli- tical and religious strife.

There were complaints, too, about the Royal Scots, and local people say that soldiers were inclined to move youngsters on with the butt of a rifle or call them names like 'Fenian popehead'. Senior army officers have denied such allegations of misbehav- iour, but it is hard to see how they know shat their men in the streets are saying, and Scottish regiments are not always com- posed of angels. One obvious act of indis4 cipline was to throw stones back at rioters.

How far the youngsters of Ballymurphy Were used by what General Freeland described as sinister elements is difficult to say. Cardinal Conway seemed to agree with him by referring to 'some fanatics who

ould like to see trouble'. But the British GOC produced no evidence to support his convic- tion, and his surprise that Catholic youths should stone 'their own army' for three nights running suggests that he underesti- mates the amount of anti-British feeling in

West Belfast. The troops. were welcomed in August as a defence against marauding Protestants, but to some Catholics they are merely a lesser evil than the Royal Ulster Constabulary or the B Specials. The North- ern Ireland Prime Minister, Major Chiches- ter-Clark, was more guarded in his sugges- tion that outsiders might be seeking to foment trouble; the government has learned the unwisdom of using republicans as scape- goats for every evil.

But whatever the truth of the Bally- murphy battle, it provoked a new wave of bomb outrages at the weekend. Mr Wilson's explicit assurance that British troops would stay as long as they were needed has done something to assuage the alarm created by • General Freeland's press conference on Monday. But the prospects for peace look distinctly uncertain; the Irish Republican Army may feel the time is opportune for a direct intervention. Already there is a threat to shoot British soldiers, and some republi- cans feel that Stormont could be destroyed by one more push. Nor could anyone be happy about the approach of the Orange parades in July and the anniversary of the August riots. There is growing pressure for a curb on the number of parades, to ease tension and allow even better protection for those that are permitted.

Time will tell whether government minis- ters and senior army officers are wise to rush so quickly to refute suggestions that soldiers have misbehaved. None of the Brit- ish troops have enjoyed their duty in Belfast —a peace-keeping operation within the United Kingdom is a new experience for them—and it would not be surprising if their feelings came to the surface occasion- ally. One of the mistakes made in the past was to whitewash the RUC, when it was obvious to any impartial observer that some police had misbehaved badly under strain. Only one of the police investigations into allegations of police brutality has produced any positive result, and all charges have been dropped.

But there have been four deaths within the past year in which the police role has been criticised—and, among all the deaths arising from disturbances, the only prosecutions brought have been in connection with the shooting of a police constable. Three of the four deaths fall within the scope of the Scarman tribunal, whose power to compel witnesses to give evidence may permit a fuller scrutiny than has been possible through a normal police investigation. The first of these- deaths followed a police baton charge in Dungiven on 13 July, after an attack on an Orange hall; sixty-six year old Francis McCloskey was found unconscious at the roadside, and died in hospital. On 2 August. during disturbances at the Cath- olic Unity Flats in Belfast, sixty-five year old Patrick Corry was batoned as he was taken into custody. He died on 1 December, with bronchial pneumonia brought about by skull fractures; two policemen refused to give evidence at the inquest. On 14 August, thirty- one year old John Gallagher was shot dead in Armagh, when a volley of shots was fired into a crowd of civil rights demonstrators; seventeen armed B Specials from nearby Tynan were at the scene, but none would give evidence at the inquest.

The other incident, of course, which led to the fourth death, is the beating-up of forty-two year old Samuel Devenney during disturbances in Derry on 19 April last year. He had a heart attack a few days later, and eventually died on 17 July after another heart attack. Mr Devenney, members of his family and neighbours were beaten up inside his house allegedly by policemen whom an investigation by District Inspector John Faulkner failed to identify. One witness said that one of the assailants carried a blackthorn stick; none of the district inspec- tors or head constables in the area, who would have carried this symbol of their rank, would attend an identity parade. One of the Devenney girls claimed to have recognised a local constable, who withdrew from the house, but has not had a chance to discover him by an identification parade or by exam- ining photographs of policemen who were on duty.

The Northern Ireland Minister of Home

Affairs, Mr Robert Porter, has pointed out that policemen have a legal right to refuse to take part in an identification parade, but it seems that no sort of disciplinary action has been taken against men who appear to be hindering an investigation. And what of officers who either do not know what men under their command are doing, or are deliberately concealing information? Unfor- tunately, the. government replies under pres- sure from Opposition MPS—notably Mr John Hume—have given an impression of complacency, even self-satisfaction that in- quiries have been fruitless.

Now, of course, a Scotland Yard investi- gation is under way—at the request not of the government but of Sir Arthur Young. In a political sense it comes too late; whatever Chief Supt Drury uncovers, there will be a lasting impression of a conspiracy of silence within the RUC and a government prepared to condone this. The government presses ahead manfully with its legislative reforms, and Major Chichester-Clark stands up to his right-wing critics. But there is lacking the human touch that would persuade the Catho- lic community that this is an administration which really cares about their well-being. This, too, may have been a factor in the battle of Ballymurphy.