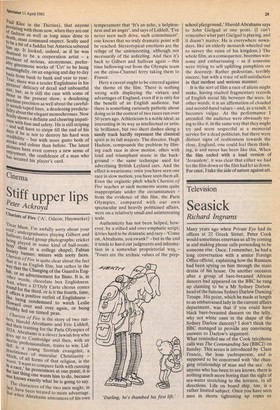 Chariots of Fire ('A', Odeon, Haymarket) bear Mum, I'm awfully sorry about your cold'; undergraduates playing Gilbert and Sbullivan; faded group photographs; cricket Played in some kind of ball-room; ',;t/Ys' choir in a college chapel; Fabian Society banner; miners with sooty faces. Chariots Of Fire is quite clear about the fact thatit is an English film, but rather in the ,* ay that the Changing of the Guard is Eng ush, or an advertisement for Bisto. It is, in Other words, chocolate box Englishness. And, when a D'Oyly Carte chorus comes irtt:4111d for the third, or is it the fourth, time, °ffers a positive surfeit of Englishness being condemned to watch Leslie ;',10ward orciblover and over again, or being ty fed on tinned peas. Chariots of Fire is the story of two runners, Harold Abrahams and Eric Liddell, a.nd their training for the Paris Olympics of 1924. Abrahams is a clever Jewish boy who g°es up to Cambridge and then, with an ascetic professionalism, trains to win. Lid is a young Scottish evangelist, a Practitioner of muscular Christianity — Wviltich, of all forms of that religion, is the orst. 'I want to compare faith with running ni a race,' he pronounces at one point; it is the last thing one wants him to do, because one knows exactly what he is going to say. The characters of the two men might, in tact, have been treated to more advantage. u1 when Abrahams announces of his own temperament that 'It's an ache, a helplessness and an anger', and says of Liddell, 'I've never seen such drive, such commitment', one knows that no truly dramatic point will be reached. Stereotypical emotions are the refuge of the uninteresting, although not necessarily of the unfeeling. And then it's back to Gilbert and Sullivan again — this time bellowing'out from the Olympic team on the doss-Channel ferry taking them to France.

Here a caveat ought to be entered against the theme of the film. There is nothing wrong with displaying the virtues and advantages of England, even if it is only for the benefit of an English audience, but there is something curiously pathetic about doing so in the context of two races run over 50 years ago. Athleticism is a noble ideal, as interesting in its way as intellectual or artistic brilliance, but two short dashes along a sandy track hardly represent the classical spirit in its full majesty. The director, Hugh Hudson, compounds the problem by filming each race in slow motion, often with loud and triumphant music in the background — the same technique used for advertising British Leyland cars. And the effect is wearisome: once you have seen one race in slow motion, you have seen them all. Even the orgiastic pitch which Chariots of Fire reaches at such moments seems quite inappropriate under the circumstances — from the evidence of this film, the Paris Olympics, compared with our own spectacular and heavily politicised affairs, were on a relatively small and uninteresting scale.

Authenticity has not been helped, however, by a stilted and over-emphatic script; it tries hard to be dramatic and racy—'Come on, Abrahams, you swank!' —but in the end it tends to hand out judgments and informa tion in a somewhat proprietorial way,, — 'Yours are the archaic values of the prep school playground,' Harold Abrahams says to John Gielgud at one point. (I can't remember what part Gielgud is playing, and it doesn't matter. He is everywhere nowadays, like an elderly monarch wheeled out to survey the ruins of his kingdom.) The whole film, as a consequence, becomes winsome and embarrassing — as if someone were trying to sell uplifting pamphlets on the doorstep. Rather pedestrian, terribly sincere, but with a trace of self-satisfaction in that modest and serious manner.

It is the sort of film a race of aliens might make, having studied fragmentary records of English social life between the wars. In other words, it is an affirmation of clouded and second-hand values — and, as a result, it becomes vulgar. At the performance I attended, the audience were obviously trying to like it, in the same way that they might try and seem respectful at a memorial service for a dead politician, but there were distinct signs of restlessness towards the close. England, one could feel them thinking, is and never has been like this. When the film ended with a loud version of 'Jerusalem', it was clear that either we had let the film down or the film had let us down. For once, I take the side of nature against art.