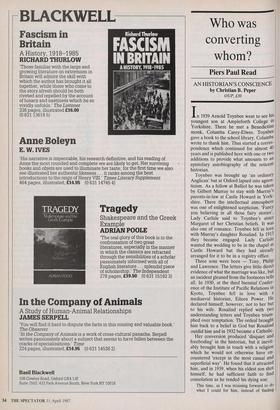 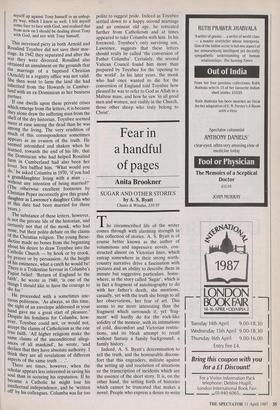 Who was converting whom?

AN HISTORIAN'S CONSCIENCE by Christian B. Peper

In 1939 Arnold Toynbee went to see his youngest son at Ampleforth College in Yorkshire. There he met a Benedictine monk, Columba Carey-Elwes. Toynbee gave a book to the school library. Columba wrote to thank him. Thus started a corres- pondence which continued for almost 40 years and is published here with one or two additions to provide what amounts to an epistolary autobiography of the reticent historian.

Toynbee was brought up 'an ordinary Anglican' but at Oxford lapsed into agnos- ticism. As a fellow at Balliol he was taken by Gilbert Murray to stay with Murray's parents-in-law at Castle Howard in York- shire. There the intellectual atmosphere was one of enlightened scepticism. 'Fancy you believing in all those fairy stories', Lady Carlisle said to Toynbee's sister Margaret of her Christian beliefs. It was also one of romance. Toynbee fell in love with Murray's daughter Rosalind. In 1913 they became engaged. Lady Carlisle wanted the wedding to be in the chapel at Castle Howard but they had already arranged for it to be in a registry office.

Three sons were born — Tony, Philip and Lawrence. The letters give little direct evidence of what the marriage was like, but an incident gleaned from the footnotes tells all. In 1930, at the third biennial Confer- ence of the Institute of Pacific Relations in Kyoto, Toynbee fell in love with a mediaeval historian, Eileen Power. He declared himself, however, not to her but to his wife. Rosalind replied with two understanding letters and Toynbee trium- phed over temptation. The ordeal brought him back to a belief in God but Rosalind outdid him and in 1932 became a Catholic.

Her conversion produced 'disquiet and foreboding' in the historian, but it inevit- ably brought him in touch with a religion which he would not otherwise have en- countered 'except in the most casual and superficial way'. He found that it attracted him, and in 1939, when his eldest son shot himself, he had sufficient faith to find consolation as he tended his dying son: This time, as I was straining forward to do what I could for him, instead of finding myself up against Tony himself in an unhap- py way, which I knew so well, I felt myself come face to face with God, and realised that from now on I should be dealing about Tony With God, and not with Tony himself.

This increased piety in both Arnold and Rosalind Toynbee did not save their mar- riage. In 1942 they separated and after the war they were divorced. Rosalind also obtained an annulment on the grounds that the marriage of a baptised Christian (Arnold) in a registry office was not valid. She then went to farm the land she had Inherited from the Howards in Cumber- land with an ex-Dominican as her business partner.

If one dwells upon these private crises Which emerge from the letters, it is because they alone draw the suffering man from the Shell of the dry historian. Toynbee seemed more at ease among the dead than he was among the living. The very erudition of much of this correspondence sometimes appears as an evasion of the truth. He seemed astonished and shaken when he learned, towards the end of his life, that the Dominican who had helped Rosalind farm in Cumberland had also been her lover. Sex baffled him. 'What would you do, he asked Columba in 1970, 'if you had a .granddaughter living with a man . . . without any intention of being married?' Cthe otherwise excellent footnotes by Christian Peper incorrectly give this grand- daughter as Lawrence's daughter Celia who at this date had been married for three Years.) The substance of these letters, however, ls not the private life of the historian, and certainly not that of the monk, who had none, but their polite debate on the claims Of the Christian religion. The young Bene- dictine made no bones from the beginning about his desire to draw Toynbee into the Catholic Church — by hook or by crook, bY prayer or by persuasion. At the height Of his eminence, what a catch he would be! There is a Tridentine fervour in Columba's Papist belief: 'Return of England to the faith', he wrote in 1940, 'is one of the things I should like to have the courage to die for.'

He proceeded with a sometimes unc- tuous politeness. 'As always, so this time, the sight of an envelope addressed in your hand gave me a great start of pleasure.' Despite his fondness for Columba, how- ever, Toynbee could not, or would not, accept the claims of Catholicism as the one true faith. 'All higher religions make the same claims of the unconditional allegi- ances of all mankind', he wrote, 'and declare that they have absolute authority. I think they are all revelations of different aspects of the same truth . . There are times, however, when the scholar appears less interested in saving his soul than in securing his reputation. If he became a Catholic he might lose his Intellectual independence, and be 'written Off' by his colleagues. Columba was far too polite to suggest pride. Indeed as Toynbee settled down to a happy second marriage and an eminent old age, he retreated further from Catholicism and at times appeared to take Columba with him. In his foreword, Toynbee's only surviving son, Lawrence, suggests that these letters should really be called 'the conversion of Father Columba'. Certainly, the second Vatican Council found him more than prepared by Toynbee for the 'opening to the world'. In his later years, the monk who had once wanted to die for the conversion of England told Toynbee how pleased he was to refer to God as Allah in a Maltese mass, and how he saw 'in all good men and women, not visibly in the Church, those other sheep who truly belong to Christ'.