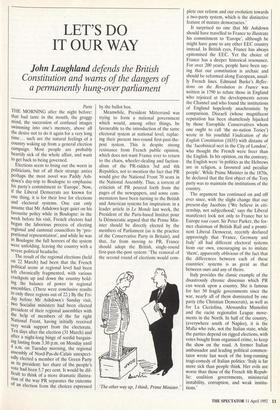 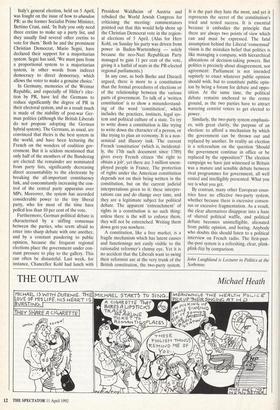 LET'S DO IT OUR WAY

THE MORNING after the night before: that bad taste in the mouth, the groggy mind, the succession of confused images swimming into one's memory, above all the desire not to do it again for a very long time.., such are the natural feelings of a country waking up from a general election campaign. Most people are probably heartily sick of the whole affair, and want to get back to being governed.

Elections seem to bring out the worst in Politicians, but of all their strange antics Perhaps the most novel was Paddy Ash- down's day-trip to Boulogne to emphasise his party's commitment to 'Europe'. Now, If the Liberal Democrats are known for one thing, it is for their love for elections and electoral systems. One can only assume that Mr Ashdown kept quiet on his favourite policy while in Boulogne: in the week before his visit, French electors had begun the laborious process of electing regional and cantonal councillors by 'pro- portional representation', and while he was in Boulogne the full horrors of the system were unfolding, leaving the country with a severe political headache.

The result of the regional elections (held on 22 March) had been that the French Political scene at regional level had been left chronically fragmented, with various crackpots up and down the country hold- ing the balance of power in regional assemblies. (There were conclusive results in only three regions out of 22.) By the Fri- day before Mr Ashdown's Sunday visit, two Socialist ministers had been elected President of their regional assemblies with the help of members of the far right National Front, having initially received very weak support from the electorate. Ten days after the election (31 March) and after a night-long binge of sordid bargain- ing lasting from 3.30 p.m. on Monday until 4 a.m. on Tuesday morning, the regional assembly of Nord-Pas-de-Calais unexpect- edly elected a member of the Green Party as its president: her share of the people's vote had been 5.7 per cent. It would be dif- ficult to think of a more dramatic illustra- tion of the way PR separates the outcome of an election from the choices expressed

by the ballot box.

Meanwhile, President Mitterrand was trying to form a national government which would, among other things, be favourable to the introduction of the same electoral system at national level, replac- ing their present two-round first-past-the- post system. This is despite strong resistance from French public opinion, which does not want France ever to return to the chaos, wheeler-dealing and faction- alism of the PR-ridden 3rd and 4th Republics, not to mention the fact that PR would give the National Front 70 seats in the National Assembly. Thus, a torrent of criticism of PR poured forth from the pages of the newspapers, and some com- mentators have been turning to the British and American systems for inspiration: in a leader article in Le Monde last week, the President of the Paris-based Institut pour la Democratie argued that the Prime Min- ister should be directly elected by the members of Parliament (as is the practice of the Conservative Party in Britain), and that, far from moving to PR, France should adopt the British, single-round first-past-the-post system: 'The removal of the second round of elections would corn- 'The other way up, I think, Prime Minister.' plete our reform and our evolution towards a two-party system, which is the distinctive feature of mature democracies.'

It surprised no one that Mr Ashdown should have travelled to France to illustrate his commitment to 'Europe', although he might have gone to any other EEC country instead. In British eyes, France has always epitomised the EEC. Yet the choice of France has a deeper historical resonance. For over 200 years, people have been say- ing that our constitution is archaic and should be reformed along European, usual- ly French lines. Edmund Burke's Reflec- tions on the Revolution in France was written in 1790 to refute those in England who rejoiced at the developments across the Channel and who found the institutions of England hopelessly anachronistic by comparison. Disraeli (whose magnificent reputation has been shamelessly hijacked by those Europhile Conservatives whom one ought to call 'the no-nation Tories') wrote in his youthful Vindication of the English Constitution (1835) with distaste of the `Jacobinical sect in the City of London', who thought the French were freer than the English. In his opinion, on the contrary, the English were 'in politics as the Hebrews are in religion, a favoured and peculiar people'. While Prime Minister in the 1870s, he declared that the first object of the Tory party was to maintain the institutions of the country.

The argument has continued on and off ever since, with the slight change that our present-day Jacobins ('We believe in citi- zenship, not subjecthood,' says the Liberal manifesto) look not only to France but to Europe tout court. Sir Peter Parker, the for- mer chairman of British Rail and a promi- nent Liberal Democrat, recently declared approvingly that 'France, Germany and Italy' all had different electoral systems from our own, encouraging us to imitate 'them', apparently oblivious of the fact that the differences between each of these countries' systems is as great as that between ours and any of theirs.

Italy provides the classic example of the disastrously chronic dissensus which PR can wreak upon a country. She is famous for her 50 fragile governments since the war, nearly all of them dominated by one party (the Christian Democrats), as well as for La Cicciolina, Alessandra Mussolini and the racist regionalist League move- ments in the North. In half of the country, (everywhere south of Naples), it is the Mafia who rule, not the Italian state, while the parties depend on rigged elections, with votes bought from organised crime, to keep the show on the road. A former Italian ambassador and leading political commen- tator wrote last week of the long-running tragi-comedy of Italian politics: 'Italy is far more sick than people think. Her evils are worse than those of the French 4th Repub- lic: coalition governments, ministerial instability, corruption, and weak institu- tions.'

Italy's general election, held on 5 April, was fought on the issue of how to abandon PR: as the former Socialist Prime Minister, Bettino Craxi, said, 'In Italy you only need three cretins to make up a party list, and they usually find several other cretins to vote for them.' Both he and the prominent Christian Democrat, Mario Segni, have declared their support for a majoritarian system. Segni has said, `We must pass from a proportional system to a majoritarian system, in other words from indirect democracy to direct democracy, which allows the voter to make a genuine choice.'

In Germany, memories of the Weimar Republic, and especially of Hitler's elec- tion by PR, have led the Germans to reduce significantly the degree of PR in their electoral system, and as a result much is made of the stability of post-war Ger- man politics (although the British Liberals do not propose adopting the German hybrid system). The Germans, as usual, are convinced that theirs is the best system in the world, and have been lecturing the French on the wonders of coalition gov- ernment. But it is seldom mentioned that only half of the members of the Bundestag are elected: the remainder are nominated from party lists, significantly decreasing direct accountability to the electorate by breaking the all-important constituency link, and concomitantly increasing the con- trol of the central party apparatus over MPs. Moreover, the system has accorded considerable power to the tiny liberal party, who for most of the time have polled less than 10 per cent of the vote.

Furthermore, German political debate is characterised by a stifling consensus between the parties, who seem afraid to enter into sharp debate with one another, and by a constant pandering to public opinion, because the frequent regional elections place the government under con- stant pressure to play to the gallery. This can often be distasteful. Last week, for instance, Chancellor Kohl had lunch with President Waldheim of Austria and rebuked the World Jewish Congress for criticising the meeting: commentators pointed out that this would help shore up the Christian Democrat vote in the region- al elections of 5 April. (Alas for Herr Kohl, on Sunday his party was driven from power in Baden-Wurtemberg — solely because the neo-Nazi Republican Party managed to gain 11 per cent of the vote, giving it a hatful of seats in the PR-elected regional parliaments.) In any case, as both Burke and Disraeli argued, there is more to a constitution than the formal procedures of elections or of the relationship between the various parts of government. To talk of a 'written constitution' is to show a misunderstand- ing of the word `constitution', which includes the practices, instincts, legal sys- tem and political culture of a state. To try to write down a constitution is like trying to write down the character of a person, or like trying to plan an economy. It is a non- sensical and illusory task. The current French 'constitution' (which is, incidental- ly, the 17th such document since 1789) gives every French citizen `the right to obtain a job', yet there are 3 million unem- ployed people in France. The protection of rights under the American constitution depends not on their being written in the constitution, but on the current judicial interpretations given to it: these interpre- tations can and do change over time, and they are a legitimate subject for political debate. The apparent `entrenchment' of rights in a constitution is no such thing: unless there is the will to enforce them, they will not be entrenched. Writing them down gets you nowhere.

A constitution, like a free market, is a fragile mechanism which has latent causes and functionings not easily visible to the rationalist reformer's clumsy eye. Yet it is no accident that the Liberals want to swing their reformist axe at the very trunk of the British constitution, the two-party system. It is the part they hate the most, and yet it represents the secret of the constitution's tried and tested success. It is essential because it embodies the principle that there are always two points of view which can and must be expressed. The fatal assumption behind the Liberal `consensual' vision is the mistaken belief that politics is like managing a company, with hierarchical allocations of decision-taking powers. But politics is precisely about disagreement, not agreement: Parliament is not intended supinely to enact whatever public opinion should wish, but to constitute public opin- ion by being a forum for debate and oppo- sition. At the same time, the political debate remains anchored to the centre ground, as the two parties have to attract wavering centrist voters to get elected to power.

Similarly, the two-party system emphasis- es, with great clarity, the purpose of an election: to afford a mechanism by which the government can be thrown out and replaced by another. In reality an election is a referendum on the question `Should the government continue in office or be replaced by the opposition?' The election campaign we have just witnessed in Britain was a mature and sensible debate between rival programmes for government, all well costed and intelligibly presented. What you see is what you get.

By contrast, many other European coun- tries have no effective two-party system, whether because there is excessive consen- sus or excessive fragmentation. As a result, the clear alternatives disappear into a haze of slurred political waffle, and political debate becomes unintelligible, alienated from public opinion, and boring. Anybody who doubts this should listen to a political interview on French radio. The first-past- the-post system is a refreshing, clear, plink- plink-fizz by comparison.

John Laughland is Lecturer in Politics at the Sorbonne.