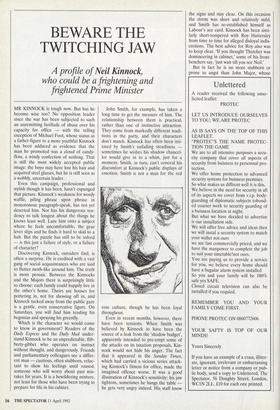 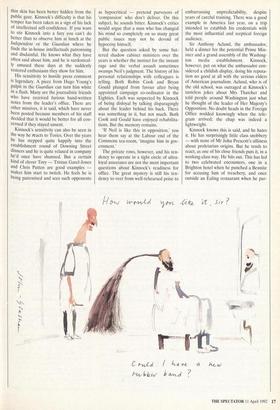 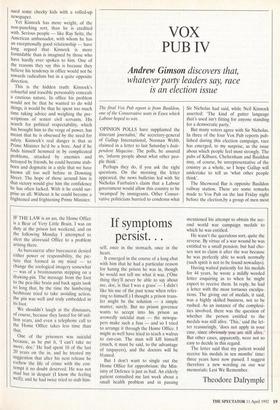 who could be a frightening and frightened Prime Minister

MR KINNOCK is tough now. But has he become wise too? No opposition leader since the war has been subjected to such an unremitting fusillade of abuse over his capacity for office — with the telling exception of Michael Foot, whose status as a father-figure to a more youthful Kinnock has been adduced as evidence that the man he promoted was a cloud of candy- floss, a windy confection of nothing. That is still the most widely accepted public image: the boyo may have lost his hair and acquired steel glasses, but he is still seen as a wobbly, uncertain leader.

Even this campaign, professional and stylish though it has been, hasn't expunged that picture. Kinnock's weakness for wordy waffle, piling phrase upon phrase in monotonous paragraph-speak, has not yet deserted him. Nor has his dangerous ten- dency to talk longest about the things he knows least well. Lure him onto a subject where he feels uncomfortable, the gear lever slips and he finds it hard to skid to a halt. But the puzzle has still to be solved — is this just a failure of style, or a failure of character?

Discovering Kinnock, outsiders find, is often a surprise. He is credited with a vast gang of social acquaintances who are said to flutter moth-like around him. The truth is more prosaic. Between the Kinnocks and the Majors there is surprisingly little to choose: each family could happily live in the other's home. Theirs are houses for pottering in, not for showing off in, and Kinnock tucked away from the public gaze is a gentle, even conservative figure. On Saturdays, you will find him tending his begonias and spraying his greenfly.

Which is the character we would come to know in government? Readers of the

Daily Express and the Daily Mail under-

stand Kinnock to be an unpredictable, flib- berty-gibbet who operates on instinct without thought, and dangerously. Friends and parliamentary colleagues see a differ- ent man — cautious, often stubborn, reluc- tant to show his feelings until roused, someone who will worry about past mis- takes for years. It is a bewildering mixture, not least for those who have been trying to prepare for life in his cabinet. John Smith, for example, has taken a long time to get the measure of him. The relationship between them is practical, rather than one of instinctive attraction. They come from markedly different tradi- tions in the party, and their characters don't match. Kinnock has often been irri- tated by Smith's unfailing steadiness — sometimes he wishes his shadow chancel- lor would give in to a whim, just for a moment. Smith, in turn, can't conceal his discomfort at Kinnock's public displays of emotion. Smith is not a man for the red rose culture, though he has been loyal throughout.

Even in recent months, however, there have been tensions. When Smith was believed by Kinnock to have been the source of a leak from the 'shadow budget', apparently intended to pre-empt some of the attacks on its taxation proposals, Kin- nock would not hide his anger. The fact that it appeared in the Sunday Times, which had carried a vicious series attack- ing Kinnock's fitness for office, made the imagined offence worse. It was a good illustration of Kinnock's sensitivity: his jaw tightens, sometimes he bangs the table — he gets very angry indeed. His staff know

the signs and stay clear. On this occasion the storm was short and relatively mild, and Smith has re-established himself as Labour's ace card. Kinnock has been simi- larly short-tempered with Roy Hattersley from time to time for alleged disloyal indis- cretions. The best advice for Roy also was to keep clear. 'If you thought Thatcher was domineering in cabinet,' some of his front- benchers say, 'just wait till you see Neil.'

But in fact he is no more stubborn or prone to angst than John Major, whose thin skin has been better hidden from the public gaze. Kinnock's difficulty is that his temper has been taken as a sign of his lack of intellectual self-confidence. If you want to stir Kinnock into a fury you can't do better than to observe him at lunch at the Independent or the Guardian where he finds the in-house intellectuals patronising and disdainful. He knows what they have often said about him, and he is sardonical- ly amused these days at the suddenly restored enthusiasm they show for him.

His sensitivity to hostile press comment is legendary. A piece from Hugo Young's pulpit in the Guardian can turn him white in a flash. Many are the journalistic friends Who have received furious hand-written notes from the leader's office. There are other missives, it is said, which have never been posted because members of his staff decided that it would be better for all con- cerned if they stayed unsent.

Kinnock's sensitivity can also be seen in the way he reacts to Tories. Over the years he has stepped quite happily into the establishment round of Downing Street dinners and he is quite relaxed in company he'd once have shunned. But a certain kind of clever Tory — Tristan Garel-Jones and Chris Patten are good examples — makes him start to twitch. He feels he is being patronised and sees such opponents as hypocritical — pretend purveyors of 'compassion' who don't deliver. On this subject, he sounds bitter. Kinnock's critics would argue that a man who has changed his mind so completely on so many great public issues may not be devoid of hypocrisy himself.

But the question asked by some bat- tered shadow cabinet ministers over the years is whether the instinct for the instant rage and the verbal assault sometimes swamps Neil's judgment. The history of his personal relationships with colleagues is telling. Both Robin Cook and Bryan Gould plunged from favour after being appointed campaign co-ordinator in the Eighties. Each was suspected by Kinnock of being disloyal by talking disparagingly about the leader behind his back. There was something in it, but not much. Both Cook and Gould have enjoyed rehabilita- tions. But the memory remains.

'If Neil is like this in opposition,' you hear them say at the Labour end of the Commons tea-room, 'imagine him in gov- ernment.'

The private rows, however, and his ten- dency to operate in a tight circle of ultra- loyal associates are not the most important questions about Kinnock's readiness for office. The great mystery is still his ten- dency to veer from well-rehearsed poise to embarrassing unpredictability, despite years of careful training. There was a good example in America last year, on a trip intended to establish his credentials with the most influential and sceptical foreign audience.

Sir Anthony Acland, the ambassador, held a dinner for the potential Prime Min- ister and a grand assembly of the Washing- ton media establishment. Kinnock, however, put on what the ambassador con- sidered a childish display, doing his reputa- tion no good at all with the serious elders of American journalism. Acland, who is of the old school, was outraged at Kinnock's tasteless jokes about Mrs Thatcher and told people around Washington just what he thought of the leader of Her Majesty's Opposition. No doubt heads in the Foreign Office nodded knowingly when the tele- gram arrived; the chap was indeed a lightweight.

Kinnock knows this is said, and he hates it. He has surprisingly little class snobbery — with none of Mr John Prescott's silliness about proletarian origins. But he tends to react, as one of his close friends puts it, in a working-class way. He hits out. This has led to two celebrated encounters, one in a Brighton hotel when he punched a Bennite for accusing him of treachery, and once outside an Ealing restaurant when he pur-

sued some cheeky kids with a rolled-up newspaper.

Yet Kinnock has more weight, of the non-punching sort, than he is credited with. Serious people — like Ray Seitz, the American ambassador, with whom he has an exceptionally good relationship — have long argued that Kinnock is more formidable than is imagined by those who have hardly ever spoken to him. One of the reasons they say this is because they believe his tendency in office would not be towards radicalism but in a quite opposite direction.

This is the hidden truth: Kinnock's colourful and irascible personality conceals a cautious nature. In office his problem would not be that he wanted to do wild things, it would be that he spent too much time taking advice and weighing the pre- scriptions of senior civil servants. His search for political respectability, which has brought him to the verge of power, has meant that he is obsessed by the need for safety. Kinnock's real danger is that as Prime Minister he'd be a bore. And if he finds himself hemmed in by complicated problems, attacked by enemies and betrayed by friends, he could become stub- born and dogmatic in a style that we have known all too well before in Downing Street. The hope of those around him is that victory would give him the confidence he has often lacked. With it he could sur- prise us all. Without it he could become a frightened and frightening Prime Minister.