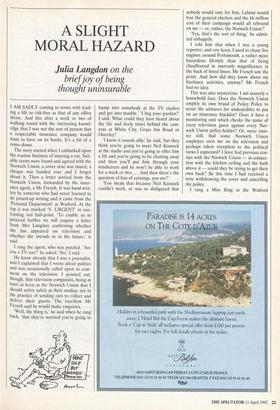 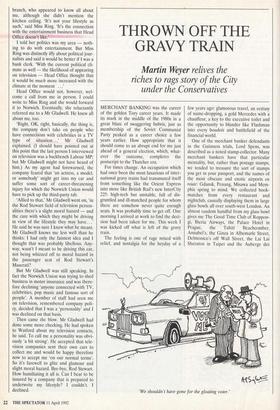 Julia Langdon on the

brief joy of being thought uninsurable

I AM SADLY coming to terms with lead- ing a life as risk-free as that of any office drone. And this after a week or two of walking round with the interesting knowl- edge that I was not the sort of person that a respectable insurance company would want to have on its books. It's a bit of a come-down.

The story started when I embarked upon the routine business of insuring a car. Suit- able terms were found and agreed with the Norwich Union, a cover note was issued, a cheque was handed over and I forgot about it. Then a letter arrived from the Norwich Union, forwarded by the insur- ance agent, a Mr French. It was hand-writ- ten by someone who had never learned to do joined-up writing and it came from the 'Personal Department' at Watford. At the top it was marked 'V. URGENT' in con- trasting red ball-point. 'To enable us to proceed further we will require a letter from Mrs Langdon confirming whether she has appeared on television and whether she intends to in the future,' it said.

He knew already that I was a journalist, and I explained that I wrote about politics and was occasionally called upon to com- ment on the television. I pointed out, though, that television companies, being at least as keen as the Norwich Union that I Should arrive safely at their studios, are in the practice of sending cars to collect and deliver their guests. The excellent Mr French said he would make enquiries.

'Well, the thing is,' he said when he rang back, 'that they're worried you're going to

bump into somebody at the TV studios and get into trouble.' I beg your pardon?' I said. What could they have heard about the life and lively times behind the cam- eras at White City, Grays Inn Road or Osterley?

'I know it sounds silly,' he said, 'but they think you're going to meet Neil Kinnock at the studio and you're going to offer him a lift and you're going to be chatting away and then you'll put him through your windscreen and he won't be able to work for a week or two ... And then there's the question of loss of earnings, you see?'

'You mean that because Neil Kinnock couldn't work, or was so disfigured that nobody would vote for him, Labour would lose the general election and the a million cost of their campaign would all rebound on me — or, rather, the Norwich Union?'

'Yes, that's the sort of thing,' he admit- ted unhappily.

I told him that when I was a young reporter, and very keen, I used to chase fire engines around Portsmouth, a rather more hazardous lifestyle than that of being chauffeured in matronly magnificence in the back of hired limos. Mr French saw the point. And how did they know about my freelance activities, anyway? Mr French had no idea.

This was also mysterious. I am scarcely a household face. Does the Norwich Union employ its own brand of Policy Police to scour the airwaves for undesirables to put on an insurance blacklist? Does it have a monitoring unit which checks the name of every television guest against every Nor- wich Union policy-holder? Or, more sinis- ter still, had some Norwich Union employee seen me on the television and perhaps taken exception to the political views I expressed? I have had previous con- tact with the Norwich Union — in connec- tion with the kitchen ceiling and the bath above it — could they be trying to get their own back? By this time I had received a note withdrawing the cover and cancelling the policy.

I rang a Miss Ring at the Watford branch, who appeared to know all about me, although she didn't mention the kitchen ceiling. 'It's not your lifestyle as such,' said Miss Ring. 'It's the connection with the entertainment business that Head Office doesn't like.'

I told her politics was my area — noth- ing to do with entertainment. But Miss Ring was distinctly iffy about political jour- nalists and said it would be better if I was a bank clerk. 'With the current political cli- mate as well — the likelihood of appearing on television — Head Office thought that it would be much more increased with the climate at the moment ...'

Head Office would not, however, wel- come a call from me in person. I could write to Miss Ring and she would forward it to Norwich. Eventually, she reluctantly referred me to a Mr Gladwell. He knew all about me, too.

'Right, OK, right, basically, the thing is, the company don't take on people who have connections with celebrities in a TV type of situation ...' Mr Gladwell explained. (I should have pointed out at this point that the last person I interviewed on television was a backbench Labour MP; but Mr Gladwell might not have heard of him.) As my agent had forewarned, the company feared that 'an actress, a model, or somebody' might get into my car and suffer some sort of career-threatening injury for which the Norwich Union would have to pick up the third-party tab.

'Allied to that,' Mr Gladwell went on, 'in the Rod Stewart field of television person- alities there's a slight moral hazard — and the care with which they might be driving in view of the lifestyle they may have He said he was sure I knew what he meant. Mr Gladwell knows me less well than he thinks: I had only the faintest idea and I thought that was probably libellous. Any- way, wasn't I meant to be driving this car, not being whizzed off to moral hazard in the passenger seat of Rod Stewart's Maserati?

But Mr Gladwell was still speaking. In fact the Norwich Union was trying to shed business in motor insurance and was there- fore declining 'anyone connected with TV, celebrities, pop music and famous sort of people'. A member of staff had seen me on television, remembered company poli- cy, decided that I was a 'personality' and I was declined on that basis.

Then came the blow. Mr Gladwell had done some more checking. He had spoken to Watford about my television contacts,

he said. To call me a personality was obvi- ously 'a bit strong'. He accepted that tele-

vision companies sent their own cars to collect me and would be happy therefore now to accept me 'on our normal terms'.

So it's farewell to glitz and glamour and slight moral hazard. Bye-bye, Rod Stewart. How humiliating it all is. Can I bear to be insured by a company that is prepared to underwrite my lifestyle? I couldn't. I declined.