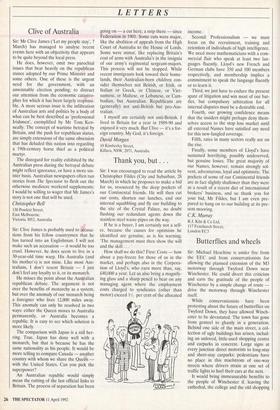 Sir: Mr Clive James (`Let my people stay', 7 March) has managed to analyse recent events here with an objectivity that appears to be quite beyond the local press.

He does, however, omit two parochial issues that bear heavily on the republican stance adopted by our Prime Minister and some others. One of these is the urgent need for the government, with an unwinnable election pending, to distract our attention from the economic catastro- phes for which it has been largely responsi- ble. A more serious issue is the infiltration of Australian arts and politics by a body of what can be best described as 'professional Irishmen', exemplified by Mr Tom Ken- neally. The concept of wartime betrayal by Britain, and the push for republican status, are simply extensions of the same obsession that has deluded this nation into regarding a 19th-century horse thief as a political martyr.

The disregard for reality exhibited by the Australian press during the betrayal debate might reflect ignorance, or have a more sin- ister basis. Australian newspapers often run stories from The Spectator to flesh out the otherwise mediocre weekend supplements: I would be willing to wager that Mr James's story is not one that will be used.