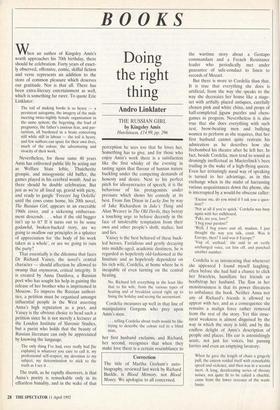 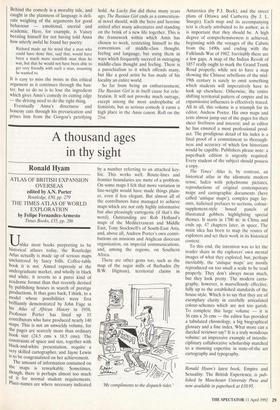 hen an author of Kingsley Amis's worth approaches his 70th birthday, there should be celebration. Forty years of exact- ly observed, offensive, comic, skilful fiction and verse represents an addition to the store of common pleasure which deserves our gratitude. Nor is that all. There has been extra-literary entertainment as well, which is something far rarer. To quote Eric Linklater:

The toil of making books is so heavy — a persistent autogamy, the imagery of the male meeting twice-nightly female organisation in the same system; the begetting, the load of pregnancy, the father's anxious fear, and par- turition, all burdened in a brain conceiving still while still in labour — the toil is heavy, and few authors can spare for their own lives, much of the colour, the adventuring and vivacity of their work.

Nevertheless, for those same 40 years Amis has enlivened public life by acting out as Welfare State leftie, Thatcherite groupie, and misogynistic old buffer, the games played in his cerebral womb. And so there should be double celebration. But just as we're all lined up, gravid with piety, and ready to gurgle 'Freezer Jug Oofella' until the cows come home, his 20th novel, The Russian Girl, appears in an execrable 1960s cover, and a sickening embarrass- ment descends . . . what if the old bugger isn't up to it? If it turns out to be some godawful, broken-backed story, are we going to swallow our principles in a splutter of appreciation for 'the body of his work taken as a whole', or are we going to ruin the party?

That essentially is the dilemma that faces Dr Richard Vaisey, the novel's central character — should affection be allowed to swamp that oxymoron, critical integrity. It is created by Anna Danilova, a Russian poet who has sought his help in gaining the release of her brother who is imprisoned in Moscow. To impress the Russian authori- ties, a petition must be organised amongst influential people in the West asserting Anna's high reputation as a poet, and Vaisey is the obvious choice to head such a petition since he is not merely a lecturer at the London Institute of Slavonic Studies, but a purist who holds that the beauty of Russian literature can only be appreciated by knowing the language.

The only thing I've had, ever really had [he explains] is whatever you care to call it, my professional self-respect, my devotion to my subject, my determination to stick to the truth as I see it .. .

The truth, as he rapidly discovers, is that Anna's poetry is remarkable only in its effortless banality, and in the wake of that

perception he sees too that he loves her. Something has to give, and for those who enjoy Amis's work there is a satisfaction like the first whisky of the evening in tasting again that flavour of human nature buckling under the competing demands of honesty and desire. Next to his perfect pitch for idiosyncracies of speech, it is the behaviour of his protagonists under pressure which shows his comedy at its best. From Jim Dixon in Lucky Jim by way of Jake Richardson in Jake's Thing and Alun Weaver in The Old Devils, they betray a touching urge to behave decently in the face of intolerable temptation from their own and other people's sloth, malice, lust and lies.

Vaisey is the best behaved of these buck- led heroes. Fastidious and gently decaying into middle-aged, academic dustiness, he is regarded as hopelessly old-fashioned at the Institute and as hopelessly dependent on his rich wife, Cordelia, at home where he is incapable of even turning on the central heating.

No, Richard left everything in the least like that to his wife, from the various types of heating and of breakfast cereal right up to fixing the holiday and seeing the accountant.

Cordelia measures up well in that line of manipulative Gorgons who prey upon Amis's men.

... telling Cordelia about truth would be like trying to describe the colour red to a blind man,

her first husband exclaims, and Richard, her second, recognises that when they make love there is a certain resemblance to the wartime story about a Gestapo commandant and a French Resistance leader who periodically met under guarantee of safe-conduct to listen to records of Mozart.

But there is more to Cordelia than .that. It is true that everything she does is artificial, from the way she speaks to the way she decorates her house like a stage- set with artfully placed antiques, carefully chosen pink and white china, and props of half-completed jigsaw puzzles and chess- games in progress. Nevertheless it is also true that she does everything with such zest, brow-beating men and bullying women to perform as she requires, that her first husband cannot quite restrain his admiration as he describes how she firebombed his theatre after he left her. In fact, beside Cordelia, men tend to sound as droningly ineffectual as Maeterlinck's bees trailing in the wake of a high-flying queen. Even her irritatingly nasal way of speaking is turned to her advantage, as in this exchange when in the midst of harrassing various acquaintances down the phone, she is interrupted by a would-be obscene caller:

'Not at all if you're quick.' Cordelia was busy again with her milkboard.

'I beg your pardon?'

'Vug of, uzzhaul,' she said in an eerily unchanged voice, cut him off, and punched another number.

Cordelia is so intoxicating that whenever she appeared I found myself laughing, often before she had had a chance to click her bracelets, humiliate her friends or boobytrap her husband. The flaw in her monstrousness is that its power threatens to unbalance the book. Neither Anna nor any of Richard's friends is allowed to appear with her, and as a consequence she remains a malign force rather removed from the rest of the story. Yet this struc- tural weakness is almost disguised by the way in which the story is told, and by the endless delight of Amis's description of people and places. His ear is astonishingly acute, not just for voices, but passing lorries and even an emptying lavatory:

When he gave the length of chain a gingerly pull, the cistern voided itself with remarkable speed and violence, and then was in a second inert. A long, decelerating series of throaty noises, not quite fit to be called a chuckle, came from the lower recesses of the wash- basin.

Behind the comedy is a morality tale, and caught in the plainness of language is deli- cate weighing of the arguments for good behaviour — emotional, uxorial and academic. Here, for example, is Vaisey berating himself for not having told Anna how utterly awful he found her poetry:

Richard made up his mind that a man who could have done that, said that, would have been a much more unselfish man than he was, but that he would not have been able to get very friendly with such a man, assuming he wanted to.

It is easy to miss the twists in this ethical argument as it continues through the ban- ter, but to do so is to lose the ingredient which gives Amis's comedy its cutting edge — the driving need to do the right thing.

hold. As Lucky Jim did those many years ago, The Russian Girl ends as a convention- al novel should, with the hero and heroine united after many adventures and standing on the brink of a new life together. This is the framework within which Amis has chosen to work, restricting himself to the conventions of middle-class thought, feeling and language, but using them in ways which frequently succeed in outraging middle-class thought and feeling. There is a parochialism to it which offends many, but like a good artist he has made of his locality an entire world.

So far from being an embarrassment, The Russian Girl is in itself cause for cele- bration. It will not provoke much outrage, except among the most androphobic of feminists, but as serious comedy it earns a high place in the Amis canon. Roll on the 21st.