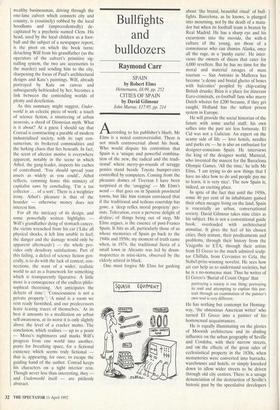 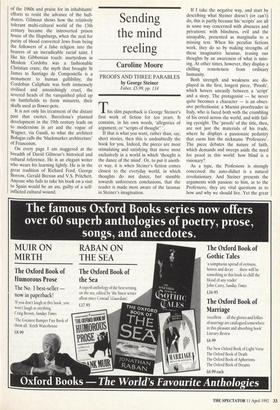 According to his publisher's blurb, Mr Elms is a noted controversialist. There is not much controversial about his book. Who would dispute his contention that Spain is a `unique and powerful combina- tion of the new, the radical and the tradi- tional' where merry-go-rounds of scraggy ponies stand beside Toyota bumper-cars controlled by computers. Coming from the pleasure domes of Tiverton I have been surprised at the `snogging' — Mr Elms's word — that goes on in Spanish provincial towns, but like him remain convinced that if the traditional and tedious courtship has gone, a `deep reflex moral propriety' per- sists. Toleration, even a perverse delight of desfase, of things being out of step, Mr Elms argues, is the essence of post-Franco Spain. It hits us all, particularly those of us whose memories of Spain go back to the 1940s and 1950s; my moment of truth came when, in 1974, the traditional fiesta of a small town in Alicante was led by drum- majorettes in mini-skirts, observed by the elderly attired in black.

One must forgive Mr Elms for gushing

about `the brutal, beautiful ritual' of bull- fights. Barcelona, as he knows, is plunged into mourning, not by the death of a mata- dor but when its football team is beaten by Real Madrid. He has a sharp eye and his excursions into the movida, the with-it culture of the young, are those of a connoisseur who can dismiss Alaska, once all the rage, as a `punky curio'. He inter- views the owners of discos that cater for 4,000 revellers. But he has no time for the moral and material ravages of mass tourism — San Antonio in Mallorca has become `a dense and brutal ghetto of boxes with balconies' peopled by chip-eating British drunks; Ibiza is a place for itinerant Euro-criminals, ex-football fans who marry Dutch whores for £200 because, if they get caught, Holland has the softest prison system in Europe.

He will provide the social historian of the future with some useful stuff; his own sallies into the past are less fortunate. El Cid was not a Galician. An expert on the seamy side of life — love hotels, needles and parks etc — he is also an enthusiast for designer-conscious Spain. He interviews the king of the designer world, Mariscal, who invented the mascot for the Barcelona Olympic Games. `All the time,' he tells Mr Elms, 'I am trying to do new things that I have no idea how to do and people pay me to learn, it is very nice'. The new Spain is, indeed, an exciting place.

In spite of the fact that until the 1950s, some 40 per cent of its inhabitants gained their often meagre living on the land, Spain is essentially an urban, conversational society. David Gilmour takes nine cities as his subject. His is not a conventional guide book, overloaded with architectural minutiae. It gives the feel of his chosen cities, their texture, their predicaments and problems, through their history from the Visigoths to ETA, through their artists from El Greco to the much admired sculp- tor Chillida, from Cervantes to Cela, the Nobel-prize-winning novelist. He sees how art can help us to understand societies, but he is a no-nonsense man. Thus he writes of El Greco's 'Burial of Count Orgaz' that

portraying a society is one thing; portraying its soul and attempting to explain this por- trait through an examination of the painter's own soul is very different.

He has nothing but contempt for Heming- way, 'the obnoxious American writer' who turned El Greco into a painter of his homosexual acquaintances.

He is equally illuminating on the glories of Moorish architecture and its abiding influence on the urban geography of Seville and Cordoba, with their narrow streets, and on the effects of the great sales of ecclesiastical property in the 1830s, when monasteries were converted into barracks, warehouses and hotels, or simply knocked down to allow wider streets to be driven through old city centres. There is a savage denunciation of the destruction of Seville's historic past by the speculative developers of the 1960s and praise for its inhabitants' efforts to resist the advance of the bull- dozers. Gilmour shows how the relatively tolerant multi-cultural world of the 13th century became the introverted prison house of the Hapsburgs, when the zeal for purity of blood converted Jews from being the followers of a false religion into the bearers of an ineradicable racial taint. I like his Gibbonian touch: martyrdom in Moslem Cordoba was a fashionable Christian craze; the myth that brought St James to Santiago de Compostella is a monument to human gullibility; the Cordoban Caliphate was both immensely civilised and astonishingly cruel, the severed heads of the vanquished piled up on battlefields to form minarets, their skulls used as flower-pots.

It is not only his treatment of the distant past that excites. Barcelona's planned development in the 19th century leads on to modernism in art and the vogue of Wagner, via Gaudi, to what the architect Bohigas calls the tlackmarket architecture' of Francoism.

On every page I am staggered at the breadth of David Gilmour's historical and cultural reference. He is an elegant writer who wears his learning lightly. He is in the great tradition of Richard Ford, George Borrow, Gerald Brenan and V.S. Pritchett. Anyone who fails to take his book on a visit to Spain would be an ass, guilty of a self- inflicted cultural wound.