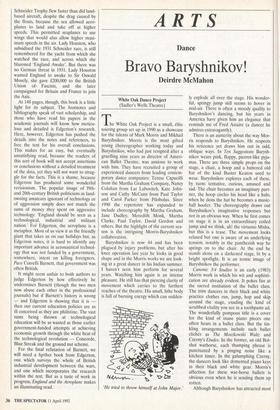 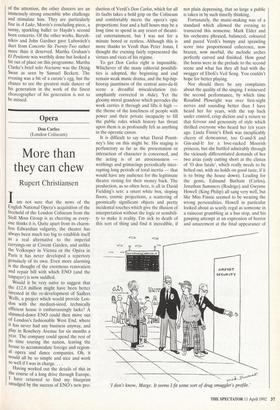 The White Oak Project is a small, elite touring group set up in 1990 as a showcase for the talents of Mark Morris and Mikhail Baryshnikov. Morris is the most gifted young choreographer working today and Baryshnikov, who had just resigned after a gruelling nine years as director of Ameri- can Ballet Theatre, was anxious to work with him. They have recruited a group of experienced dancers from leading contem- porary dance companies: Terese Capucilli from the Martha Graham Company, Nancy Colahan from Lar Lubovitch, Kate John- son and Cathy McCann from Paul Taylor and Carol Parker from Pilobolus. Since 1990 the repertoire has expanded to include choreography by Martha Graham, Jane Dudley, Meredith Monk, Martha Clarke, Paul Taylor, David Gordon and others. But the highlight of the current sea- son is the intriguing Morris-Baryshnikov collaboration.

Baryshnikov is now 44 and has been plagued by injury problems, but after his knee operation last year he looks in good shape and in the Morris works we are look- ing at a great dancer in his Indian summer. I haven't seen him perform for several years. Watching him again is an intense pleasure. He still has that piercing clarity of movement which carries to the furthest reaches of the theatre. His small, lithe body is full of burning energy which can sudden-

ly explode all over the stage. His wonder- ful, springy jump still seems to hover in mid-air. There is often a moody quality to Baryshnikov's dancing, but his years in America have given him an elegance that reminds me of Fred Astaire (a dancer he admires extravagantly).

There is an austerity about the way Mor- ris responds to Baryshnikov. He respects his reticence yet draws him out in odd, oblique ways. In Ten Suggestions Barysh- nikov wears pink, floppy, pierrot-like pyja- mas. There are three simple props on the stage, a chair, a hoop and a battered old hat of the kind Buster Keaton used to wear. Baryshnikov explores each of these, by turns tentative, curious, amused and sad. The chair becomes an imaginary part- ner, the hoop circles his head like a halo, when he dons the hat he becomes a music- hall hoofer. The choreography draws out Baryshnikov's imaginative responses but not in an obvious way. When he first comes on stage it is in an extraordinary coiled jump and we think, ah! the virtuoso Misha, but this is a tease. The movement looks relaxed but one is aware of an underlying tension, notably in the pantherish way he springs on to the chair. At the end he stands alone on a darkened stage, lit by a bright spotlight. It is an iconic image of Baryshnikov the performer.

Canonic 314 Studies is an early (1983) Morris work in which his wit and sophisti- cation are already evident. It pokes fun at the sacred institution of the ballet class. The trim dancers in their black and white practice clothes run, jump, hop and skip around the stage, exuding the kind of scrubbed vitality you see in a toothpaste ad. The wonderfully pompous title is a cover for the kind of inane piano pieces one

often hears in a ballet class. But the tin- kling arrangements include such ballet

clichés as The Moszkowski Waltz and Czerny's Etudes. In the former, an old Bol- shoi warhorse, each thumping phrase is

punctuated by a pinging noise like a kitchen timer. In the galumphing Czerny, the dancers look like demented piano keys in their black and white gear. Morris's affection for these war-horse ballets is obvious even when he is sending them up rotten.

Although Baryshnikov has attracted most

of the attention, the other dancers are an Immensely strong ensemble who challenge and stimulate him. They are particularly fine in A Lake, Morris's concluding piece, a sunny, sparkling ballet to Haydn's second horn concerto. Of the other works, Barysh- nikov and John Gardner gave Lubovitch's duet from Concerto Six Twenty-Two rather more than it deserved. Martha Graham's El Penitente was worthily done but looked a bit out of place on this programme. Martha Clarke's brief solo Nocturne was the Dying Swan as seen by Samuel Beckett. The evening was a bit of a curate's egg, but the chance to see the greatest male dancer of his generation in the work of the finest choreographer of his generation is not to be missed.