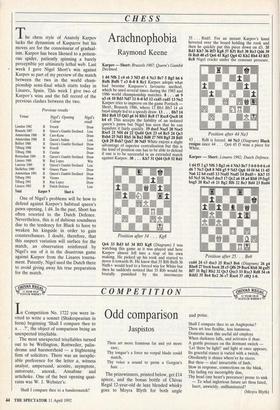 The chess style of Anatoly Karpov lacks the dynamism of Kasparov but his moves are for the connoisseur of gradual- ism. Karpov has been likened to a poison- ous spider, patiently spinning a barely perceptible yet ultimately lethal web. Last week I gave Nigel Short's win against Karpov as part of my preview of the match between the two in the world cham- pionship semi-final which starts today in Linares, Spain. This week I give two of Karpov's wins and the full record of the previous clashes between the two.

One of Nigel's problems will be how to defend against Karpov's habitual queen's pawn opening, 1 d4. In the past, Short has often resorted to the Dutch Defence. Nevertheless, this is of dubious soundness due to the 'tendency for Black to have to weaken his kingside in order to gain counterchances. I doubt, therefore, that this suspect variation will surface for the match, an observation reinforced by Nigel's use of it in the disastrous game against Karpov from the Linares tourna- ment. Patently, Nigel used the Dutch there to avoid giving away his true preparation for the match. Karpov — Short: Brussels 1987; Queen's Gambit Declined.

Qe6 33 Rd3 h5 34 R13 Kg8 (Diagram) I was watching this game as it was played and here Karpov almost fell into a trap of his own making. He picked up his rook and started to move it towards 16. He knew that 35 Rf6 Bxf6 36 Nxf6+ would lead to a forced win for White but then he suddenly noticed that 35 Rf6 would be brutally punished by the intermezzo