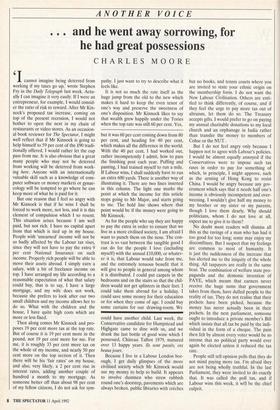 . . . and he went away sorrowing, for he had great possessions

Icannot imagine being deterred from working if my taxes go up,' wrote Stephen Fry in the Daily Telegraph last week. Actu- ally I can imagine it very easily. If I were an entrepreneur, for example, I would consid- er the ratio of risk to reward. After Mr Kin- flock's proposed tax increase, coming on top of the present recession, I would not bother to open the next in my chain of restaurants or video stores. As an occasion- al book reviewer for The Spectator, I might well reflect that if Mr Kinnock is going to help himself to 59 per cent of the £90 tradi- tionally offered, I would rather let the cup pass from me. It is also obvious that a great many people who may not be deterred From working will be deterred from work- ing here. Anyone with an internationally valuable skill such as a knowledge of com- puter software or money markets or gynae- cology will be tempted to go where he can keep more of what he is paid for it.

But one reason that I feel so angry with Mr Kinnock is that if he wins I shall be forced to work more, not less, and it is this element of compulsion which I so resent. This situation arises because I am well paid, but not rich. I have no capital apart from that which is tied up in my house. People with 'unearned' income will not be so badly affected by the Labour tax rises, since they will not have to pay the extra 9 per cent National Insurance on such income. Properly rich people will be able to move their assets abroad. I simply earn a salary, with a bit of freelance income on top. I have arranged my life according to a reasonable expectation of what that salary could buy, that is to say, I have a large mortgage, and my wife does not work, because she prefers to look after our two small children and my income allows her to do so. What with the children and the house, I have quite high costs which are more or less fixed.

Then along comes Mr Kinnock and pro- poses 19 per cent more tax at the top rate. But of course it is 19 per cent more in the pound, not 19 per cent more for me. For me, it is roughly 33 per cent more tax on the whole of my income, and nearly 50 per cent more on the top section of it. Then there will be his 'fair rates' on my house, and also, very likely, a 2 per cent rise in interest rates, adding another couple of hundred a month to my mortgage. As someone better off than about 98 per cent of my fellow citizens, I do not ask for sym- pathy. I just want to try to describe what it feels like.

It is not so much the rate itself as the huge jump from the old to the new which makes it hard to keep the even tenor of one's way and preserve the sweetness of one's disposition. Mr Kinnock likes to say that wealth grew happily under the Tories when the top rate was still 60 per cent. Yes, but it was 60 per cent coming down from 80 per cent, and heading for 40 per cent, which makes all the difference in the world. With the 40 per cent, I had worked out, rather incompetently I admit, how to pass the finishing post each year. Puffing and panting, I had trained myself to run a mile. If Labour wins, I shall suddenly have to run an extra 600 yards. There is another way of illustrating it. There are two lines inserted in this column. The light one marks the point at which the income for this article stops going to Mr Major, and starts going to me. The bold line shows where that point would be if the money were going to Mr Kinnock.

As for the people who say they are happy to pay the extra in order to ensure that we live in a more civilised society, I am afraid I want to punch them on the nose. The con- trast is so vast between the tangible good I can do for the people I love (including myself) with the annual £10,000, or whatev- er it is, that Labour would take from me, and the extremely tenuous benefit that it will give to people in general among whom it is distributed. I could put carpets in the bedrooms and on the stairs so that the chil- dren would not get splinters in their feet. I could take them abroad for a holiday. I could save some money for their education or for when they come of age. I could buy some curtains for our drawing-room. We

could have another child. Last week, the Conservative candidate for Hampstead and Highgate came to dine with us, and we drank the last bottle of good wine which I possessed, Château Talbot 1979, matured over 13 happy years. Es sont passes, ces beaux fours.

Because I live in a Labour London bor- ough, I get daily glimpses of the more civilised society which Mr Kinnock would use my money to help to build. It appears to involve dustmen who strew rubbish round one's doorstep, pavements which are always broken, public libraries with crèches but no books, and tennis courts where you are invited to state your ethnic origin on the membership form. I do not want the New Labour Civilisation. Others are enti- tled to think differently, of course, and if they feel the urge to pay more tax out of altruism, let them do so. The Treasury accepts gifts. I would prefer to go on paying my annual charitable donations to my local church and an orphanage in India rather than transfer the money to members of Cohse or the NUT.

But I do not feel angry only because I happen not to agree with Labour's policies. I would be almost equally annoyed if the Conservatives were to impose such tax rates in order to pay for something of which, in principle, I might approve, such as the arming of Hong Kong to resist China. I would be angry because any gov- ernment which says that it needs half one's income is obviously incompetent and over- weening. I wouldn't give half my money to my brother or my sister or my parents, though I love them dearly. Why should politicians, whom I do not love at all, expect me to give it to them?

No doubt most readers will dismiss all this as the ravings of a man who has had it too good for too long; some may enjoy my discomfiture. But I suspect that my feelings are common to most of humanity. It is just the suddenness of the increase that has alerted me to the iniquity of the whole thing. All taxpayers are really in the same boat. The combination of welfare state pro- paganda and the demonic invention of PAYE, which means that earners never receive the huge sums that government takes from them, have dulled people to the reality of tax. They do not realise that their pockets have been picked, because the money has never actually been in their pockets. In the next parliament, someone ought to introduce a private member's Bill which insists that all tax be paid by the indi- vidual in the form of a cheque. The pain then felt by almost every voter would be so intense that no political party would ever again be elected unless it reduced the tax rate.

People still tell opinion polls that they do not mind paying more tax. I'm afraid they are not being wholly truthful. In the last Parliament, they were invited to do exactly that. It was called the poll tax, and if Labour wins this week, it will be the chief culprit.