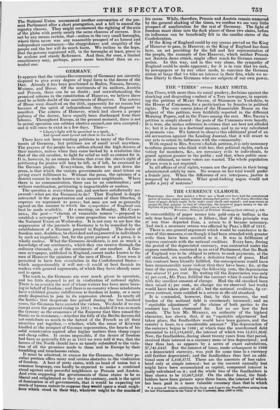 THE " TIMES " versus MARY SMITH.

THE Times, with more than its usual prudery, declaims against the shocking and disgusting conduct of a Tory newspaper, in reprint- ing the petition of MARY SMITH, of Stanmore in Yorkshire, to the House of Commons, for a participation by females in political rights. The very coarse jokes of the IIonourable House on the subject of this petition, were faithfully reported in the different Morning Papers, and in the Times among the rest. Mrs. SMITH'S petition is simply absurd : the jests of the Commons were beastly. It is true, she makes reference to crimes that arc best not alluded to; but it is done in a doctrinal manner, and in no way calculated to promote vice. We lament to observe this additional proof of' an old accusation against the Leading Journal, that it will resort to any arts to retain its influence with the commonalty.

With regard to Mrs. SMITH'S foolish petition, it is only necessary to inform persons who think with her, that political rig lits, such as voting for members, &c., are necessary evils to individuals, to guard against greater to the public ; and that, when public secu- rity is obtained, no more voters are wanted. The whole population of men even is not required. In all affairs of civil rights, women are the gainers in their being administered solely by men. No woman on her trial would prefer a female jury. When the difference of sex interposes, justice is tempered by tenderness. What good-looking rogue would not prefer a jury of matrons?