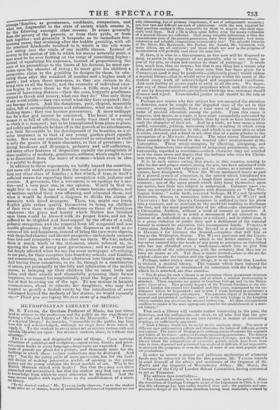 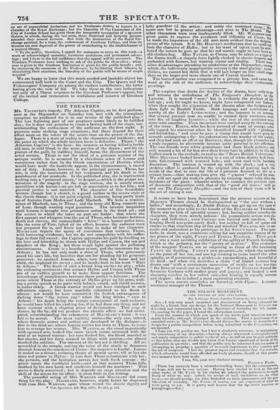 Ma. E. TAYLOR, the Gresham Professor of Music' has just circu- lated an address to the profession and the public on the expediency of farming a Classical Library of Music in the Metropolis. " The want of a musical library," he remarks, "accessible to the public, has long been felt and acknowledged, although no steps have been taken to supply it. To the student in every other art or science various rich mid valuable libraries are open : the musical student, alone, is without this advantage." This is a strange and disgraceful state of things. Upon national collections of paintings and sculptures—upon coins, fossils, and mines cals—upon books in every language—large sums are expended. thou. sands of pounds are given for u picture, and thousands more for the buildings in which these various collections may be displayed. And why ? Not for the paltry pride of mere possession, but for the laud- able design of making possession useful, of opening to the young painter and the young sculptor the finest models of art. Why is the British Museum stored with books ? Not that they may rest there untouched and unexamined, but that the student may find easy access to knowledge from which he must otherwise be debarred. And the same reason applies with equal force to the establishment of a musi- cal library.

"To the musical student," air. TA YtoR justly observes, "as to the student 111 any other art or science, works of established and deserved reputation are not only interesting, but of primary importance, if not of indispensable necessity; yet, how rare and difficult are such of attainment : while the sum required for their purchase renders it often impossible for those to acquire who most espe- cially need them. Half a life is often spent before even the scanty rudiments of a musical library are collected. How many valuable collections, within the remembrance even of the present generation, have been dispersed ; how many interesting and valuable compositions irretrievably lost ! The splendid libraries of Dr. Bever, Mr. Bartleman, Alr. Parker, Dr. Arnold, Mr. Greatorex, with many others, are all scattered ; and those which are now in the progress of accumulation will probably soon share the same fate."

If, then, it is wise in a Government, as few now will be disposed to deny, to assist in the progress of art generally, why is not music, as one of the arts, to claim and receive its share of patronage ? It needs less, much less, than its sisters; but that is any thing but a reason why It should receive nothing. The same sum that has been given for a CORREGGIO (and it may be prudently—judiciously given) would endow a musical library—that is, would serve to place within the reach of the student every work of acknowledged and unquestioned excellence. And such facility of access ought to exist in all the arts. We depre- cate any of those foolish and little prejudices which seek the elevation of one by decrying another—prejudices which the true stateman should disavow and reject. Even-handed justice to all should be the rule of his conduct.

Perhaps one reason why this subject has not occupied the attention it deserves, must be sought in the degraded state of the art in this country ; arising, primarily, from a total want of what deserves the name of musical education among the public. From this cause it happens, that music, as a trade, is here more successfully cultivated by the low-minded, ignorant, and selfish, than by such as have laboured to exalt the character of their art. And by a trade, we here mean a mere sordid, miserable, jobbing, mercenary traffic—a calling in which every dirty and dishonest practice is rife, and which is no more akin to what is noble, elevated, and refined in art, than that of a paint-grinder to the occupation of a MICHAEL ANGELO. The most recent illustration of these remarks will be found in the musical (dis) arrangements at the

Coronation. These music-mongers, by elbowing, intriguing, and thrusting themselves into situations of temporary prominence, are, un- fortunately, regarded as musicians,—which character they are entitled to in the same sense and degree that the bellman who cries his Christ- mas verses, may claim that of a poet.

It is to such causes owing, that music, in this country, ceasing to take its due and proper station among the arts, has been associated with ignorance, servility, and vulgarity ; and its claims, as a natural conse- quence, been disregarded. When Mr. WYSE mentioned music as part of a general system of education, in the speech which introduced his almost-carried motion, there was a laugh from many of our sagacious senators ; one of the many proofs which daily force themselves upon our notice, how little this subject is understood. Columns upon co- hums are occupied in our newspapers with discussions on " The Wel- lington Statue : " noble lords, reverend bishops, M. P.s and Quarterly Reviewers, discuss in successive letters the merits of WYATT and CHANTREY but the Queen's Composer is suffered to turn his place into a sinecure, and to proclaim to the world his inability to discharge the first, and the most grateful duty of his office—the composition of a Coronation Anthem, without a word of censure or question. A Coronation Anthem is as much a monument of art erected to the honour of an individual as a statue or a column ; and in either case, it is a gross violation of public duty and a defilement of the national honour to commit its execution into incompetent hands. PURCELL'S Coronation Anthem for JAMLS the Second is a national trophy; so is HANDEL'S for GEORGE the Second,—trophies that will live as long as the Wellington Statue. The WYATT partisans and the CHAN.. TREY partisans only differ about which is the better statuary ; but it has never entered into the beads of any party to patronize an individual who has not chiselled even a tombstone—much less to give him the proceeds of the subscription, with the certainty that they are to have no statue at all. Yet thus is music treated—thus is the art de- graded—thus are the nation and the Queen insulted.

Perhaps, under such a state of things, it is no wonder that London is without a musical library. The reasons which have induced the Gresham Professor to recommend its connexion with the College to which he is attached, are thus stated-

" The fit place for such a library is an institution whose permanent existence is secured by a sufficient endowment, and to which a musical professorship is attached. These requisites are united in Gresham College, and (in the Metro- polis) there alone. 'I' hie princely bequest of Sir Thomas Gresham to the citi- zens of London has existed two hundred and fifty years, maintained by the en- dowment which lie bequeathed ; and is now, I trust, destined to commence a fresh career of prosperity and renown. 'lire patriotic object of its founder was general and unrestricted usefulness ; and it is the only College in the kingdom which contains any provision for musical instruction. All these circumstances combine to render it the most appropriate place for the establishment of a musi- cal library."

That such a library will contain matter interesting to the poet, the historian, and the antiquarian—in short, to all who feel that the pro- gress of art and literature in our own country is matter of interesting inquiry—is sufficiently apparent. " Such a library would not be useful to the musician alone. The music of different ages and countries reflects and illustrates the habits of different periods and nations. The music of Shakspeare's contemporaries illustrates the manners and habits of his times: and so on through succeeding generations. The history of dramatic music, especially, illustrates the history of its age ; and the want of a library where the compositions of successive periods might have been, from time to time, deposited and preserved has reildeied it difficult, if not impossible, to ascertain the composer, or even the date, of some of our most popular musi- cal productions."

In order to secure a proper and judicious application of whatever funds may be intrusted to him for this purpose, Mr. TAYLOR intends to avail himself of the advice and assistance of the Organist of St. Paul's and the Organist of IVesttninster Abbey ; Mr. HALE, the Chairman of the City of London School Committee, having consented to act as Treasurer.

" The Gresham Lectures, it is well known, are open to the public. Since the demolition of Gresham College by an act of the Legislature in I 75.56, it is true that this advantage has been rather nominal than real; the patriotic and COM- preheurive design of Sir Thomas Greshaua having been shamefully violated by an act of unparalleled barbarism, and his Professors driveso to lecture in a chamber of the Royal Exchange; but the liberality of tv,,o Committee of the City of London School has given them the temporary 'occupation of a spacious theatre, in which, during the last term, three thousand and forty-six persons attended their several lectures. But with the destruction of the Royal Ex- change perished, for a time, the endowment of Gresham College, and thus its trustees are now deprived of the power of contributing to the establishment of a musical library. d4 To the public, therefore, I appeal for assistance to carry on this work—a work of acknowledged necessity, extensive usefulness, and permanent advan- tage; and I do so in the full confidence that the appeal will be answered. The Gresham Professors have nothing to ask of the public for themielees ; what- ever is given to the Gresham Institution is given for the public benefit ; and, by increasing the resources of the Professors, by facilitating their labours, by stimulating their exertions, the liberality of the public will be secure of ample requital."

We are happy to learn that this much.needed and laudable object has commenced well both in the Court and the City. The Queen and the Fishmongers' Company are among the earliest contributors ; the latter having given the sum of 251. We take these as the sure indications not only of a liberal response to the Gresham Professor's appeal, but of the revival and restoration to usefulness and renown of Gresham College.