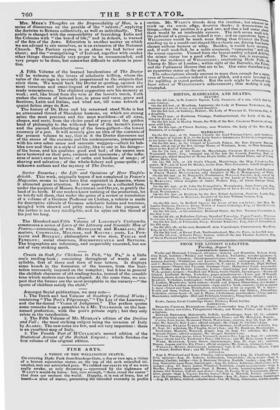 A VISION OF THE WELLINGTON STATUE.

ON entering Hyde Park from Stanhope Gate, a day or two ago, a vision of a bronze equestrian statue, on the top of the arch miscalled tri- umphal, met our astonished gaze. We rubbed our eyes to try if we were really awake, or only dreaming — oppressed by the nightmare of Wvarr's would-be horse: but, sure enough, "there stood the statue" that does not enchant the world. Happily, it is not of brass, but of board—a slice of statue, presenting the intended enormity in profile section. Mr. WYATT'S friends deny the erection; but whoever hal stuck up the scenic effigy, deserves thanks : it demonstrates * things,—that the position is a good one, and that a bad statue placed there would be an intolerable eyesore. The arch seems made to the pedestal of a group—as indeed it was: and an equestrian figure gi WELLINGTON would be much more fitting than GEORGE the Fourth standing up in a mould-cart shaped like a classic car, driving four hor i st, abreast without harness or whip. Besides, t would have melmi,g. and, if well modelled, be a noble ornament, " composing " well whit

the screen opposite. Viewed from the bronze n i

nudity yeleped Achill, the mimic statue has a good effect. The site, too, s appropriat,'. facing the residence of WELLINGTON; overlooking Hyde Park, ;Ili Champ de Mars of London ; within sight of the Barracks, the Palk, and the Parliament Houses that are to be. Our voice therefore isf4 an equestrian statue on the arch. The subscriptions already amount to more than enough for a statue, even of hronze,—unless indeed it were gilded, and a sum invested lot the regilding at stated periods. But the arch might be adorned wits bassi relied i of WELLINoron's achievements ; thus making it really triumphal.