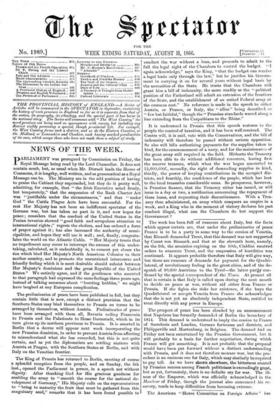 The week has been full of rumours about Italy, but

the facts which appear certain are, that under the preliminaries of peace France is to be a party in some way to the cession of Venetia, that Ricasoli demanded Trent, that this demand was not supported by Count von Bismark, and that at the eleventh hour, namely, on the 9th, the armistice expiring on the 10th, Cialdini received orders to evacuate Trent, and the suspension of hostilities was continued. It appears probable therefore that Italy will give way, but there are rumours of demands for payment for the Quadri- lateral, of revolutionary feeling in the great cities, and of the de- spatch of 90,000 Austrians to the Tyrol—the latter partii con- firmed by the special correspondent of the Times. At present all that is certain is that Italy is called upon during the next month to decide on peace or war, without aid either from France or Prussia. If she fights she risks her existence, if she buys the Quadrilateral or accepts Venetia from France she acknowledges that she is not yet an absolutely independent State, entitled to. treat directly with any power in Europe.