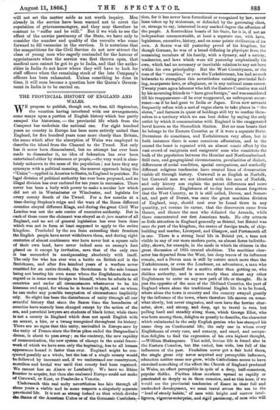 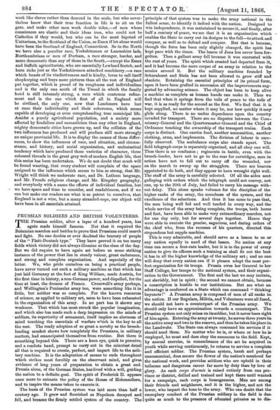 THE PROVINCIAL HISTORY 07 ENGLAND AND WALES.

WTE propose to publish, though not, we fear, till September, the vacation having interfered with our arrangements, some essays upon a portion of English history which has partly escaped the historians, — the provincial life which from the Conquest has underlain the national one. For eight hundred years no country in Europe has been more entirely united than England, for five hundred years none more closely than Britain, the name which after the absorption of Wales was employed to .describe the island from the Channel to the Tweed. Not only has it never been dismembered, but no attempt has ever been made to dismember it, no idea of federation has ever been -entertained either by statesmen or people,—the. ;very word is abso- lutely unknown to the mass of the population nor have they any -synonym with a political meaning, the nearest approach being the " Union"— applied in America to States, in England to parishes. No legal division of political authority has ever been proposed, and no illegal division has ever endured for ten years in succession. There never has been a body with power to make a secular law which -did not sit in Westminster or Winchester, and legislate for

The foe who has ever won a battle on British soil is the Scotchman, and after five hundred yeses of a warfare never -remitted for an entire decade, the Scotehman is the sole human being not bearing his own same whom the Englishman does not regard as •in some sense foreign to himself, whom he admits 'in all

Underneath 'this real unity nevertheless has •lain through all these years a visible and in some respects a singularly separate provincial life. It is not as strong indeed as that which divides the States of the American Unite) or-of the Germanic Confedera- }fence, vigoreasenterprise, and rigid parsimony, of men who will.

Lion, for it has never been 'formulated or recognized by law, never heen-taken up by statesmen, or defended by the governing class, or, strange to say, interested in any marked degree the affection of the people. A Kentuckian boasts of his State, for it is, if not an independent commonwealth, at least a separate one, with law, legislature, executive, history, and on some points civilization of its own. A Saxon was till yesterday proud of his kingdom, for though German, he was of a breed differing in physique from the remaining members of his family, with a dynasty, and a society, tendencies, and -laws which were till yesterday emphatically his own, which had no necessary or inevitable relation to any not born within his own principality. But the West Countryman, or the man of the " counties," or even the Yorkshireman, has had,no such bulwarks to strengthen this nevertheless existing provincial feel- ing, noseparate laws, or allegiance, or in any national sense career. Twenty years, ago a labourer who left the Eastern Counties was said by. his mourning friends to " have gone foreign," and was considered reappearaneeif he ever reappeared, an unfrequent occur- rence—as if he had,gone to India or Japan. Even now servants frequently refuse with a sort of vague alarm to take places in " the shires," and farmers in quest of holdings still try to confine them- selves to a territory which we can best define by saying the only outlet by which it communicates with England is the exaggerated hovel known as the Shoreditch Station. But no man boasts that he belongs to the Eastern Counties as if it were a separate State. Devethans do -sometimes, and Yorkshiremen very often, but in both instances there is some conscious affectation, -and in the second the boast is repeated with an almost comic effect by the vast crowd of emigrants and emigrants' sons who constitute the bulk of the population between the Humber and Northumberland. Still race, and geographical circumstances, peculiarities of dialect, differences of-social condition, special occupations, and markedly different religious tendencies have created lines of demarcation visible all through history. Cornwall is as English 913 Norfolk, but Cornwall men are not identical with the men of Norfolk, and only history can explain the patent differences and more patent similarity. Englishmen of to-day have almost forgotten that the West Country, as it is still called, Devon, and Somer- set, and part of Dorset, was once the great maritime division of England, may, should coal ever be found there in any -quantity, yet resume its career, that the discoverers came from thence, and thence the men who defeated the Armada, while there concentrated our first American trade. No city attracts so little attention in England generally as -Bristol, but Bristol was once the -port of the-kingdom, the centre of foreign trade, of ship- building-and marine, Liverpool, and Glasgow, and Portsmouth all in one. There is a strong local life in Bristol 'yet, a tone not 'visible in-any of our more modern ports, an almost fierce individu- ality, shown, for example, in the mode in which its citizens in the great discussion of 1835 treated abolition. The maritime char- actor has departed from the West, but deep traces of its influence remain, and a Devon man is still by nature much more than the Yotlishireman, or even the Londoner, an adventurer, a man who cares to exert himself for a motive other than getting on, who dislikes authority, and is more ready than almost -any other Englishman 'to enter on any new path of life or thought. He is just the opposIte of the man of the -Midland Counties, the part of England where -alone the traditional English life is to be foutd, where alone the town is country and the country swayed greatly by the influence of the town, *here therefore life moves on some- what-slowly, but never stagnates, and men have the ?bovine char- aetee„ -slow, and strong, and deep, apt to travel in rata, but pulling hard and steadily along them, which George Eliot, who was born among them, delights -so 'greatly to describe, the character which -culminated in the only English genius who has-stamped his name deep on Continental life, the only one in whom every Englishman of every race, and country, and creed, and occupa- tion-delights to find the expression of his own highest thought, —William Shakespeare. That -solid, bovine life is -found also is the Eastern Counties, but Hiss varied, less wide, less full of the influences of the past. Feudalism never got a fair hold there, the single great city never acquired any perceptible influence, -education neither came nor grew, while Catholicism seems to have exercised something of the -effect the Church of England produced in Wales, an -effect perceptible in spite of a deep, half-conscious, popular dislike. Puritan ideas nowhere spread so rapidly or penetrated so deeply -as in these Counties, and at this hour, if we would see the provincial tendencies of Essex in their full and unchecked • development, we must travel across the sea to the " lead of steady habits," of men with bright and narrow intel-

the States of the American Unite) or-of the Germanic Confedera- }fence, vigoreasenterprise, and rigid parsimony, of men who will. work like slaves rather than descend in the scale, but who never- theless know that their true function in life is to sit on the gate, and make other men work double tides,—of men whose consciences are elastic and their ideas iron, who could not be Catholics if they would, but who can be the most bigoted of Unitarians, to the Scotland of the Union, as Essex if let alone would have been the Scotland of England, Connecticut. So in the North we have also a peculiar race, Yorkshiremen or Lancashire lads, Northumbrians or men of Durham, a race stronger, harder, and more democratic than any of those in the South,—except the Essex and Suffolk agriculturists, who are essentially Lowland Scotch, and burn ricks just as the Yorkshiremen attacked machinery,—a race which boasts of its vindictiveness and is kindly, loves to call itself shopkeeping and buys more pictures than all the rest of England put together, which is proud of its roughness and individualism and is the only one south of the Tweed in which the family bond is still intensely strong, a race which contemns refine- ment and is the one which first of all in England will be civilized, the only one, now that Londoners have lost at once their individuality and their coherence, which seems capable of developing or even comprehending true municipal life. Amidst a purely agricultural population, and a society more affected by feudalism and monasticism than any other in England, mighty democratic cities have grown up, and the collision of the two influences has produced and will produce still more strongly an unique provincial life. It is to display the causes of these differ- ences, to show the influences of race, and situation, and circum- stance, and history, and social organization, and ecclesiastical tendency which have produced these varieties of character, these coloured threads in the great grey web of modern English life, that this series has been undertaken. We do not doubt that much will be found wanting, that every student will complain of the space assigned to the influence which seems to him so strong, that Mr. Wright will think we underrate race, and Dr. Latham language, and Mr. Froude religious change, and Mr. Kingsley geography, and everybody with a name the efforts of individual families, but we have space and time to consider, and readableness, and if we can but make our readers see what is so patent to ourselves, that England is not a wire, but a many stranded-rope, our object will have been in all essentials attained.