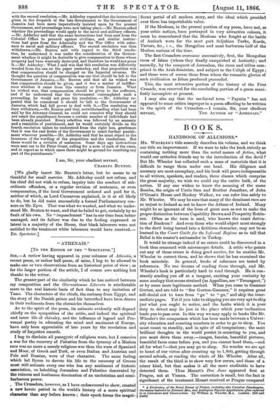 [To THE EDITOR OF THE " SPECTATOR:1 SIR,—A review having appeared in your columns of Alheniiis, a recent poem, or rather half-poem, of mine, I beg to be allowed to make one or two observations from an historical point of view ; as for the larger portion of the article, I of course owe nothing but thanks to the writer.

The greater part of the similarity which he has noticed between my composition and the Gierusalemme Liberata is attributable more to the real historic basis of fact than to any imitation of Tams°. The characters of the chiefs, the embassy from Egypt, and the story of the Danish prince and his betrothed have been drawn in their rudiments from the chronicles themselves.

As to the spirit of the poem, its estimate evidently will depend chiefly on the sympathies of the critic, and indeed the spiritual and inner life of chivalry, and the influence of legend and Pro- vencal poetry in educating the mind and sentiment of Europe, have only been appreciable of late years by the revelation and study of forgotten records.

I beg to disclaim all panegyric of religious wars, but I conceive a war for the recovery of Palestine from the tyranny of a Moslem race was no more a merely religious war than the wars of Spaniard and Moor, of Greek and Turk, or even Italian and Austrian and Pole and Russian, were of that character. The same feeling which led Byron to devote his life to the recovery of Greece must still animate every one who has any sentiment of historic association, on beholding Jerusalem and Palestine desecrated by the ruinous and loathsome domination of an unchristian and semi- barbarous power.

, The Crusaders, however, as I have endeavoured to show, created a new heroic period in the world's history of a more spiritual character than any before known ; their epoch forms the magni- ficent portal of all modern story, and the ideal which presided over them has imperishable value.

If the Moslems, in the present portion of my poem, have not, as your critic notices, been portrayed in very attractive colours, it must be remembered that the Moslems who fought at the battle of Antioch were for the most part Seljukian Turks, Kurds, Tartars, &c., i. e., the Mongolian and most barbarous half of the Moslem nations of the time.

The first Crusaders overcame successively, first, the Mongolian races of Islam (whom they finally vanquished at Antioch) ; and secondly, by the conquest of Jerusalem, the races and tribes com- prised in the Arab dominion, and subject to the Caliph of Egypt ; and these were of course those from whom the romantic glories of such civilization as Islam produced proceeded.

This, the most attractive portion of the history of the First Crusade, was reserved for the concluding portion of a poem mani festly incomplete at present.

1 may also say that the medimval term " Paynim " has not appeared to some critics improper in a poem affecting to be written in the spirit of the Crusaders.—I remain, Sir, your obedient

servant, THE AUTHOR OF " ATHENAIS.”