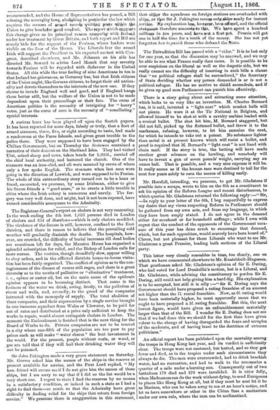 A curious hoax has been played off upon the Scotch

papers. It has been reported for some days, falsely or truly, that a fleet of armed steamers, three, five, or eight according to taste, had made a rendezvous at the Faroe Islands, and given great trouble to the police there. They were supposed to have been engaged by the Chilian Government, but on Thursday the Scotsman contained a narrative of their descent on the Shetland Isles. They had visited Uist, seized sheep and cows, taken bonds for 1,0001., carried off the chief local authority, and battered the church. One of the steamers was an iron-clad, and all were manned by crews of whom only a few spoke English. The steamers when last seen were going in the direction of Lerwick, and were supposed to be Fenian. The whole of this extraordinary story turned out to be a hoax or fraud, concocted, we presume, by some Irishman, either to give his Saxon friends a " good scare," or to create a little trouble in cities where the Irish colony is numerous and unruly. The for- gery was very well done, and might, had it not been exposed, have caused considerable annoyance to the Admiralty.