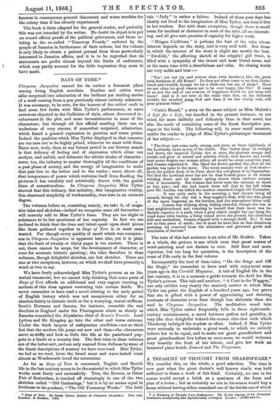 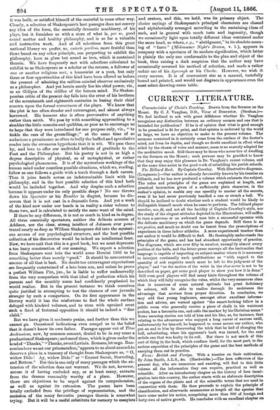 A TREASURY OF THOUGHT FROM SHAKESPEARE.* WE consider this, on

the whole, a good selection. The time is now past when the great doctor's well known simile was held sufficient to damn a work of this kind. Certainly, no one in his senses would accept a brick as a sp'ecimen of the form and plan of a house ; but as certainly no one in his senses would buy a house without having either examined one of the bricks out of which * A Treasury of Thought from Shakespeare. The Cloice Sayings of hit Priscilla; Chowders Analstiioally and Alphabetically Arranged. Loudon: arisen and Co.

it was built, or satisfied himself of the material in some other way. Clearly, a selection of Shakespeare's best passages does not convey any idea of the form, the essentially dramatic machinery, of his plays, but it furnishes us with a store of what is, per se, good sound matter and healthy philosophy, and is so far a valuable

and instructive work. And of all selections from this great national library we prefer, as, cteteris paribus, more fruitful than those based on any other principle, one purporting to exhibit the philosophy, keen as glass but sound as iron, which is contained therein. We have frequently met with selections calculated to exhibit to us Shakespeare as a scholar or the reverse, a follower of one or another religions sect, a humourist or a poet, but only three or four opportunities of this kind have been offered us before the present of admiring the million-minded observer exclusively as a philosopher. And yet herein slimly lies his chief power, viz.,

as an (Edipus of the riddles of the human mind. No Shakes- pearian critic of the present day falls into the error of his brethren of the seventeenth and eighteenth centuries in basing their chief renown upon the formal correctness of the plays. We know that the plot is too often slender and extravagant, and almost always borrowed. His humour also is often provocative of anything rather than mirth. We pass by with something approaching to a ehadderthe little conceits and quibbles, so poor as to encourage us to hope that they were introduced for one purpose only, viz., " to

tickle the ears of the groundlings ;" at the same time of so

audacious a prominence as often to bully the baffled and speculative reader into the erroneous hypothesis that it is wit. We pass these by, and love to offer our undivided tribute of gratitude to the Poet and the Philosopher. But his poetry is not in so high a

degree descriptive of physical, as of metaphysical, or rather psychological phenomena. It is of the mysterious workings of the human mind under countless possible situations, which we, reading, follow as one follows a guide with a torch through a dark cavern. Thus it joins hands across an indeterminable limit with his philosophy, and in the best possible selection of this kind both would be included together. And why despise such a selection because it appears under its only possible shape ? No one throws down his Spectator or his Rambler in disgust, because he dis- covers that it is not cast in a dramatic form. And yet a work of the kind now under our hands is in reality a sister volume to those two, and is calculated to satisfy the same want of the mind.

If there be any difference, it is not so much in kind as in degree. All three essentially spectators, neither the delicate acumen of Addison, nor the clear, strong intellect of Johnson ever pene- trated nearly as deep as William Shakespeare did into the mysteri- ous arcana of our psychological structure, and the best possible collection of his discoveries would be indeed an intellectual feasts Now, we have said that this is a good book, but we must deprecate a too hasty construction of our meaning. We expect a selection from Shakespeare sent into the world anno Domini 1866 to be something better than merely "good." It should be concentrated essence of all that is best. No doubt too extravagant expectations are frequently entertained of a late-born son, and unless he prove a perfect William Pitt, jun., he is liable to suffer undeservedly frons the very comparison with that ideal of perfection which his parents and the monthly nurse had confidently prophesied he would realize. But in the present instance we think ourselves quite justified in attempting to teat the chances of our juvenile stranger by such a comparison. On its first appearance in the literary world it has the misfortune to find the whole surface deluged with kindred volumes, and to stem with upraised crest such a flood of fraternal opposition it should be indeed a " fine child."

But we have given it moderate praise, and further than this we cannot go. Occasional indications even compel us to the belief that it doesn't know its own father. Passages appear out of Titus Andronicus, now, by common consent, denied to be in any sense a production.of Shakespeare; and oneof these, which is given under the headof "Thanks," " Thanks, sweetLavinia. Romans, let usgo. Ran- somlesshere we set our prisonersfree," appears to us about asmuchto deserve a place in a treasury of thought from Shakespeare as, " 0, widow Dido ! Ay, widow Dido !" or " Exeunt Snout, Starveling, and Bottom." But this is one only of many passages which the ex- tension of the selection does not warrant. We do not, however, accuse it of having excluded any, or at least many, extracts from the dramas reasonably worthy of a place. However, there are objections to be urged against its comprehension, as well as against its extension. The poems have been totally excluded from the privilege of representation, and the omission. of the many favourite passages therein is somewhat trying. But it will be a useful substitute for memory to essayists

and orators, and this, we hold, was its primary object. The choice sayings of Shakespeare's principal characters are classed and alphabetically arranged according to the sustaining ideas of each, and in general with much taste and ingenuity, though we occasionally light upon totally different ideas contained under the same bead, as where, e. " abridgment," in its obsolete mean- ing of " farce " (Midsummer Night's Dream, v. 1.), appears in company with a specimen of its modern signification, which latter is plainly the only one conformable to the plan and object of the book, thus raising a dark suspicion that the author may have occasionally reversed his method of selection, and made a rather unfair use of his A yscough or his Clarke. However, we wish it. every success. It is of convenient size as a manual, tastefully bound and printed, and would not disgrace in appearance even the most select drawing-room table.