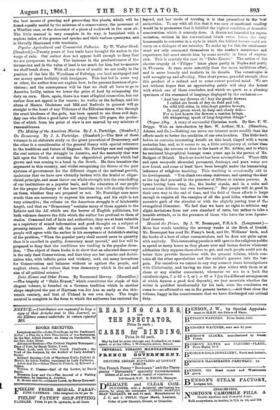 Duke Ernest and Other Poems. By Rosamund Hervey. (Macmillan.) —The

tragedy of "Duke Ernest," which constitutes the staple of this elegant volume, is founded on a German tradition which in another shape employed the pen of Hartman von der Ado as early as the thir- teenth century, and that of IThland in our own days. The tragic mateYiel is complete in the form to which the authoress has restored the

legend, and her mode of treating it is that prescribed in the best authorities. To say with all this that it was easy or emotional reading would be to pronounce that it fulfilled the highest condition of dramatie construction, which it scarcely does. A drama not intended for repre- sentation, written in the conventional blank verse, forces the very housemaids to converse in a style in which the loftiest heroes could not carry on a dialogue of ten minutes. To make up for this the sentiments. must not only commend themselves to the reader's conscience and experience, but must startle him by some novelty or force of expres- sion. This is scarcely the case in "Duke Ernest." The action of the shorter tragedy of "Filippo " takes place partly in Naples and partly in Florence. It runs more smoothly than the more ambitious effort, and is more homely and realistic in its details. The catestroPhe is well wrought up and affecting. Nine short poems, graceful enough, close this product of a refined and to some extent poetical mind. Wo are not without hopes that an appreciating public will obey the behest with which one of them concludes, and which we quote as a pleasing. specimen of the command of language displayed by the authoress :— "And buy my flowers oh 1 buy the gentle flowers I culled ere break of day on field and fell, On wild hill-sides, in trim-kept garden bowers,

In cool green wood, in deep and shady dell—

For to lost hearts the flowers a maiden brings, Oft whispering, speak of long-forgotten things."