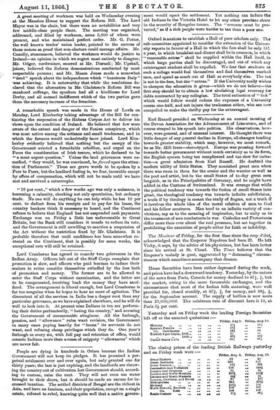 Page 3, 11 August 1866 — A great meeting of workmen was held on Wednesday evening
Close

A great meeting of workmen was held on Wednesday evening

at the Mansion House to support the Reform Bill. The Lord Mayor was in the chair, but there were no notabilities and very few middle-class people there. The meeting was organized, addressed, and filled by workmen, some 5,000 of whom were present, and who maintained perfect order. Mr. G. Potter, the well known trades' union leader, pointed to the success of those unions as proof that non-electors could manage affairs. Mr. Conolly, stonemason, believed the workmen would do justice to Ireland—an opinion in which we regret most entirely to disagree; Mr. Odger, cordwainer, sneered at Mr. Disraeli; Mr. Upshall, Joiner, believed the Reform demonstrations conducted by most respectable persons ; and Mr. Mason Jones made a somewhat -"loud" speech about the independence which "beauteous Italy" was achieving. It is noteworthy that while the resolutions de- clared that the alternative to Mr. Gladstone's Reform Bill was manhood suffrage, the speakers had all a kindliness for Lord Derby, and all seemed indifferent which of the two parties gave them the necessary increase of the franchise.