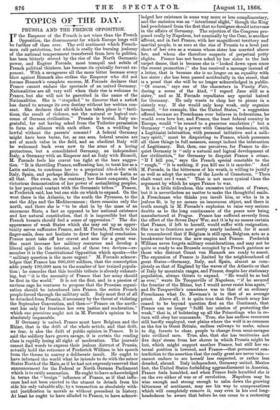 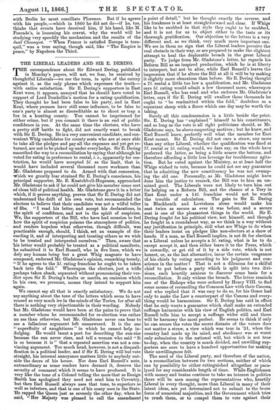 PRUSSIA AND THE FRENCH OPPOSITION.

IF the Emperor of the French is not wiser than the French Opposition, the disarmament for which Europe longs will be further off than ever. The evil sentiment which French- men call patriotism, but which is really the burning jealousy of the national temperament transferred from love to politics, has been bitterly stirred by the rise of the North Germanic power, and Eugene Forcade, most tranquil and subtle of French political thinkers, has become its cynically fervent ex- ponent. With a savageness all the more bitter because every blow against Bismark also strikes the Emperor who did not foresee Bismark's complete success, M. Forcade declares that France cannot endure the spectacle of an united Germany. Nationalities are all very well when their rise is welcome to France, but she will not be garrotted in the name of the Nationalities. She is " stupefied " to discover that a nation has dared to arrange its own destiny without her written con- sent. She declares that all which has taken place is " facti- tious, the result of violence, not the natural or logical out- come of German civilization." Prussia is brutal, Italy un- grateful, for not having asked from the Tuileries permission to form an alliance with each other. Can a wedding be lawful without the parents' consent? A federal Germany might have been borne, for, as one sees, federal armies are not of much value in the field, and an obedient Italy will be welcomed back even now to the arms of a loving protectress, but a consolidated Germany, an independent Italy, a Germany with an Emperor and an Italy with Ricasoli, M. Forcade feels his cravat too tight at the bare sugges- tion. "It is throttling France, suffocating her, to treat her as a Latin nation, to condemn her to a perpetual tgte-d-tite with Italy, Spain, and perhaps Mexico. France is not so Latin as all that. She owes, on the contrary, her finest conquests, the victorious demonstration of her power of assimilating peoples, to her perpetual contact with the Germanic tribes." France, as Frederick said, has but one side on which to expand. On the west there is the Atlantic, to the south the Pyrenees, to the east the Alps and the Mediterranean ; there remains only the north, and there she is "to be shut in by the mass of an enormous State, a fact so opposed to her national existence and her natural constitution, that it is impossible but that French breasts should feel a sense of oppression." The dis- appearance of weak States which she may eat up as oppor- tunity serves suffocates France, and M. Forcade, French to his finger-nails, does not hesitate to draw the logical conclusion. France must take off her cravat and arm for a great war. She must increase her military resources and develop a liberal spirit in the interior, and of these two devices—re- member it is the Constitutional Opposition which speaks—the "military question is the more urgent." M. Forcade acknow- ledges that France has 600,000 soldiers, that the conscription adds yearly 100,000 men to the number of her trained popula- tion ; he concedes that this terrible tribute is already exhaust- ing, but " it is the necessity of France that her army should be first in the world." It is not the first, and in a passion of envious rage he ventures to propose that the Prussian organi- zation should be introduced into France, the entire French people forced through the military mill. Italy must first of all be detached from Prussia, if necessary by the threat of violating the September Convention, and then—" France on the north- east has only for frontiers her own justice and moderation," which one perceives ought not in M. Forcade's opinion to be absolutely impassable.

If Germany is united, France must have Belgium and the Rhine, that is the drift of the whole article, and that drift, we fear, is also the drift of public opinion in France. It is said the soldiery have grown savage, it is certain the reading class is rapidly losing all sight of moderation. The journals cannot find words to express their jealous distrust of Prussia, actually hold the reticence of Frederick William in his speech from the throne to convey a deliberate insult. He ought to have informed the world what he intends to do with the minor States North of the Main, as if he had not expresslyreserved that announcement for the Federal or North German Parliament which is to ratify annexation. He ought to have acknowledged in terms the " benign " influence of France, as if that influ- ence had not been exerted to the utmost to detach from his side his only valuable ally, by a transaction as absolutely with- out justification in morals as without precedent in history. At least he ought to have alluded to France, to have acknow- ledged her existence in some way more or less complimentary, and the omission was an " intentional slight," though the King had proclaimed from the first that no foreigner should intervene in the affairs of Germany. The rejection of the Congress pro- posed really by Napoleon, but nominally by the Czar, is another affront, and in fact France, with her magnificent territory and martial people, is as sore at the rise of Prussia to a level just short of her own as a woman whose sister has married abover her, and whom she therefore suspects of perpetual petty- slights. France has not been asked by her sister to the last carpet dance, that is because she is " looked down upon since the recent promotion ;" she has received a message instead of a letter, that is because she is no longer on an equality with_ her sister ; she has been passed accidentally in the street, that is a proof that she will be no longer acknowledged in public. " Of course," says one of the characters in Vanity Fair, during a scene of the kind, " I regard Jane still as a. sister," and so M. Forcade repudiates any special hatred for Germany. He only wants to chop her to pieces in a. sisterly way. If she would only keep weak, only organize herself, " for example, like the United States," a suggestion offered because no Frenchman ever believes in federations, he would even love her, and France, the least federal country in Europe, would " be roused to a generous emulation. ;" but a. Germany " ruled by a power with Caesarian tendencies, with a Legitimist infatuation, with personal initiative and a mili- tary spirit," must be disquieting to France, which possesses. all those things in full measure, except indeed the infatuation of Legitimacy. But, then, one perceives, for France to dis- quiet Germany is " only a natural and logical development of her civilization," for Germany to disquiet France a crime- " If I kill you," says the French special constable to the " rough," " it is nothing, if you kill me it is murder." And_ M. Forcade, in the bitterness of his wrath, is willing to justify as well as adopt the motto of the Lords of Cranstoun, "Thou shalt want ere I want." That is not more cynical than the argument by which he urges France to war.

It is a little ridiculous, this excessive irritation of France, but it is nevertheless no matter to make the thoughtful smile. A Frenchman who thinks you insult him, or who is in a jealous fit, is by no means an innocuous object, and there is truth enough in M. Forcade's explosion to raise very serious doubts as to the long continuance of the peace now being manufactured at Prague. France has suffered severely from the effect of the Seven Days' War, and it is by no means certain that France, if left to herself, would suffer with resignation. She is as to frontiers now pretty nearly inclosed, for it must be remembered that if Belgium is still open, Belgium acts as a. breakwater between the new empire and France. Frederick William never forgets military considerations, and may not be quite so ready to see Brussels occupied by a French garrison as those who distrust Count von Bismark are ready to assert. The expansion of France is limited by the neighbourhood of great States—Germany, Italy., and Spain, almost as com- pletely as that of England by the waves of the Atlantic or that of Italy by mountain ranges, and France, despite her stationary population, always thirsts to expand. "He would be as bad as ever," wrote De Tocqueville of Napoleon, "if he secured the frontier of the Rhine, but I would never resist him again,- and De Tocqueville's conscience was to that of an ordinary Frenchman what Dr. Newman's is to that of an average priest. Above all, it is quite true that the French army has ceased to be beyond question first on the Continent, that France can no longer " fulfil her mission of protecting the weak," that is, of bolstering up all the Princelings who in re- turn will obey her commands. True, she has endless resources still hardly employed, vast plains where the wolf is as common as the fox in Great Britain, endless railways to make, mines to dig, forests to clear, people to change from semi-savages into civilized men. True, also, that she has territories not five days' steam from her shores in which Prussia might be lost, which might support another France, but still her ex- ternal position is lowered, and France—that permanent con- tradiction to the assertion that the really great are never vain— cannot endure to see herself less respected, or rather less dreaded, abroad. Italy independent, Germany united, Mexico lost, the United States forbidding aggrandizement in America, France feels humbled, and when France feels humbled she is on the eve either of war or of revolution. Napoleon may be wise enough and strong enough to calm down the growing bitterness of sentiment, may see his way to compensations -which will completely remove it, may even in his cool long- headedness be aware that before he can come to a reckoning with Berlin he must conciliate Florence. But if he agrees with his people, —which in 1860 he did not do—if he, too, thinks that events have deceived him, if his hand, like M. Forcade's, is loosening his cravat, why the world will be -studying very speedily the mechanism and the results of the fusil Chassepot. " When France is satisfied Europe is tran- quil," was a true saying, though said, like " The Empire is peace," by Napoleon the Third.