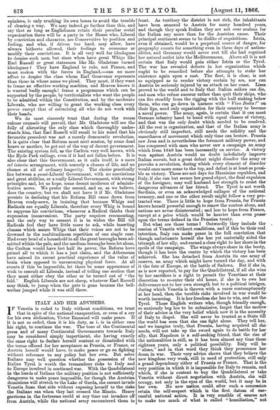 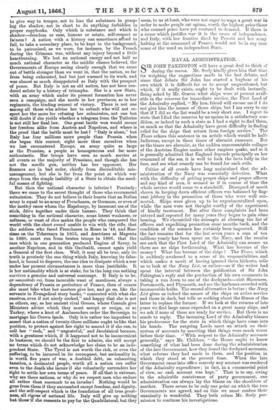 to give way to temper, not to lose the substance in grasp- ing the shadow, not in short to do anything forbidden in proper copybooks. Only which is substance and which is shadow—freedom or ease, honour or estate, self-respect or fatness A nation with a history can sometimes afford to

fail, to take a secondary place, to be kept in the background, to be patronized, as we were, for instance, by the French during the Crimean war, without any injury beyond a little heartburning. We lost no national energy and not half so much national character as the middle classes believed, the Governments of Europe seeing clearly enough that we came out of battle stronger than we went in, that the nation, so far from being exhausted, had but just warmed to its work, and was almost as much disappointed as Italy with the prospect of peace. But Italy is not an old nation, has not been ren- dered sedate by a history of triumphs. She is a new State, with an army which under its present formation has never seen a campaign, and she needs in her provinces, as in her regiments, the binding cement of victory. There is not one among all those who advise her to submit who will not re- spect her the more for refusing her submission, not one but will doubt if she yields whether a telegram from the Tuileries is not still her final law. One great battle won would secure her freedom alike from Austria and Napoleon, and where is the proof that the battle must be lost ? "Italy is alone," but Italy has four millions more people than Prussia when she began this contest, eight more than ourselves when we last encountered Europe, an army quite as large as the Prussian, a people as homogeneous and far more enthusiastic. Her troops have seen as much service at all events as the majority of Prussians, and though she has not the needle gun, neither has her opponent. Her finances are in bad order, chiefly from discreditable mis- management, but she is far from the point at which war stops from the simple inability of a State to obtain the need- ful means of lighting.

But then the national character is inferior ? Precisely; there we come to the secret thought of those who recommend submission. They do not believe in their hearts that an Italian army is equal to an army of Frenchmen, or Germans, or even of the motley races whom the Hapsburgs, by incessant use of the stick, drive together under their banner. They think that something in the national character, some latent weakness, or softness, or want of élan makes the people who- conquered the world with the short sword unable to win with the rifle, that the soldiers who faced Frenchmen in some in '48, and Rus- sians on the Tchernaya in 1855, and Austrians at Magenta in 1800, must run from beaten troops in 1866, that the twee which in one generation produced Eugene of Savoy, in another Napoleon, and in this Garibaldi, cannot again yield a General of the first class. Well, it may all be true, only its truth is precisely the one thing which Italy, knowing its false- hood, is bound to disprove, the one idea to dissipate which a war under her present circumstances is more than justifiable. It is her nationality which is at stake, for in the long run nothing survives a genuine and universal contempt. If Italy is to be, a necessitate rel, from insurable want of manliness, always a dependency of Prussia or prefecture of France, then of course she must take what her masters give her, and go on, like the servants in Evangelical story books, " contented with what she receives, even if not nicely cooked," and happy that she is not as others, say, as her ancient rival Greece, where Consuls give Ministers advice which they must accept or resign, or as Turkey, where a knot of Ambassadors order the Sovereign to mortgage his Crown lands. Only it is rather too impudent to assert that a nation of twenty-three millions ought to like that position, to protest against her right to amend it if she can, to call• her "rash," and " ungrateful," and Jacobinical because, with a greatness which, if it happened not to be inconvenient to business, we should be the first to admire, she will accept no terms which do not acknowledge her claim to be an inde- pendent State. The Tyrol- is not worth the risk, or even the suffering, to be incurred in its reconquest, but nationality is, is worth- five years of war, a doubled debt, an exhausting taxation, a decimated people, worth all a nation can stiffer even to the death*she incurs if she voluntarily surrenders her right to settle her own terms of peace. If all that is extreme, why are there nations, or why do we respect men who endure all rather than succumb to an invader? Nothing would be gone from them if they succumbed except freedom, and dignity, and the self-respect which is the foundation of all true great- ness, all, vigona of national life. Italy will give up nothing but those' if she consents to-pay for the Quadrilateral, but they

seem, to us at least, who were not eager to wage a great war in order to make people eat opium, worth the highest price those who counsel peace have yet ventured to demand. If there is a cause which justifies war it is the cause of independence, and Italy, with her frontier fixed by Prussia and her army halting at the command of France, would not be in any true sense of the word an independent State.