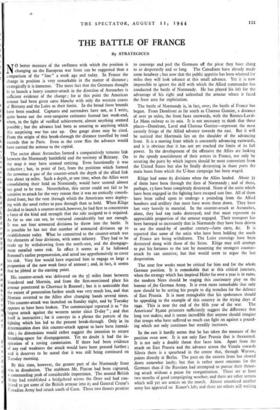 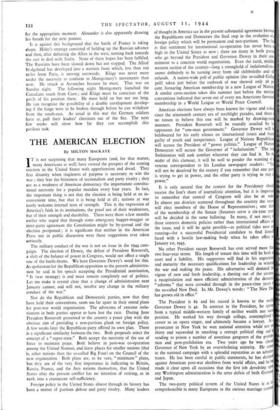 THE BATTLE OF FRANCE

NO better measure of the swiftness with which the position is changing on the European war front can be suggested than a comparison of the " line " a week „ago and today. In France the change in position is very remarkable in the matter of distance ; strategically it is immense. The mere fact that the Germans thought fit to launch a heavy counter-attack in the direction of Avranches is sufficient evidence of the change ; for at this point the American armour had been given carte blanche with only the western coasts of Brittany and the Loire as their limits. In the broad those bounds have been reached. Captures and surrenders have not, as I write, quite borne out the over-sanguine estimates formed last week-end, when, in the light of verified achievement, almost anything seemed possible ; but the advance had been as amazing as anything which this surprising war has cast up. One gauge alone may be cited. From the origin of this break-through the distance travelled by road exceeds that to Paris. Even as the crow flies the advance would have carried the armour to the capital.

The sector about Avranches formed a comparatively tenuous link between the Normandy battlefield and the territory of Brittany. On the map it may have seemed enticing. Even functionally it was seductive ; but, in point of fact, from the positions which formed the terminus a quo of the counter-attack the depth of the allied link was about 19 miles. Such a depth, at one time, when the Allies were consolidating their hold on Normandy, would have seemed almost too good to be true. Nevertheless, this sector could not fail to be sensitive to attack for the very reason that it was no statically consoli- dated front, but the vent through which the Americans were deploy- ing with the need rather to pass through than to hold. When Kluge decided to launch a counter-attack,however,he had first to concentrate a force of the kind and strength that the role assigned to it required. As far as one can see, he ventured considerably but not enough. It was not four armoured divisions he threw into the battle. It is possible he has not that number of armoured divisions up to establishment today. What he committed to the counter-attack was the elements of four divisions, with some infantry. They had to be made up by withdrawing from the north-east, and the disengage- ment entailed some risk. In effect it seems as if he followed Rommel's earlier prepossession, and acted too apprehensively to cover his risk. Very few would have expected him to engage so large a proportion of the now weak force of armour ; and, in fact, it seems that he jibbed at the starting point.

His counter-attack was 'delivered on the 51 miles front between Sourdeval and Mortain, and from the first-mentioned place his armour penetrated to Cherence le Roussel ; but it is noticeable that the extent of penetration farther south was very much less, and that Mortain reverted to the Allies after changing hands several times. This counter-attack was launched on Sunday night, and by Tuesday appears to have been broken. The communiqué reported it as "the largest attack against the western sector since D-day " ; and that itself is instructive ; for it conveys in a phrase the pattern of the fighting which has led to the present break-through. Only in its determination does this counter-attack appear to have been formid- able; its dimensions would rather suggest the intention to secure breathing-space for disengagement. Yet no doubt it had the in- spiration of a roving commission. If there had been evidence of any real weakness the attack would have been pressed further ; and it deserves to be noted that it was still being continued on Tuesday morning.

By this time, however, the greater part of the Normandy front was in dissolution. The stubborn Mt. Pincon had been captured, a commanding peak of considerable importance. The second British Army had established a bridgehead across the Orne and had con- trived to get some of the British armour into it; and General Crerar's Canadian Army had struck south of Caen. These two thrusts promise

to converge and peel the Germans off the pivot they have clung to so desperately and so long. The Canadians have already made some headway ; but now that the public appetite has been whetted for miles they will look askance at this small advance. Yet it is now impossible to ignore the skill with which the Allied commander has conducted the battle of Normandy. He has played his left for the advantage of his right and unleashed the armour where it faced the freer area for exploitation.

The battle of Normandy is, in fact, over; the battle of France has begun. From Domfront as far south as Chateau Gontier, a distance of over 50 miles, the front faces eastwards, with the Rennes-Laval- Le Mans railway as its axis. It is not necessary to. think that these places—Domfront, Laval and Chateau Gontier—represent the most easterly fringe of the Allied advance towards the east. But it will be noticed that Mortmain lies on the shoulder of the advancing front. It is a moving front which is constantly advancing eastwards, and it is obvious that it has not yet reached the limits of its full power. In the development of the offensive the Allies are looking to the speedy nourishment of their armies in France, not only by securing the ports by which ingress should be most convenient from the United States but also by finally destroying in those ports the main bases from which the U-boat campaign has been waged.

Kluge had some 65 divisions when the Allies landed. About 35 of them have been through the fires of Normandy ; and of these, perhaps, 13 have been completely destroyed. None of the units which have been engaged in the fighting have escaped scot free. All of them have been called upon to undergo a pounding from the Allied bombers and artillery that must have worn them down. They have lost very heavily in material. In the counter-attack at Avranches, alone, they had 109 tanks destroyed; and that must represent an appreciable proportion of the armour engaged. Their transport has been battered so incessantly that in Normandy they have been driven to use the stand-by of another century—farm carts, &c. It is reported that some of the units who have been holding the south of France are being withdrawn. The Loire crossings have been destroyed along with those of the Seine. Kluge may still attempt to put his fortunes to the test by mounting the strongest counter- attack he can contrive; but that would seem to argue the last desperation.

The next few weeks must be critical for him and for the whole German position. It is remarkable that at this critical juncture, when the strategy which has inspired Hitler for over a year is in ruins, the modern Nero should be staging this cautionary play on the honour of ,the German Army. It is even more remarkable that only now should he be setting his people to dig trenches for the defence of East Prussia. It is most remarkable that his spokesmen should be appealing to the example of this country in the trying days of 194o. This is near the end of the fifth year of the war. The Americans' 83,000 prisoners sufficiently suggest the difference that long test makes; and it seems incredible that anyone should imagine that troops who have suffered so much can fight on against a pound- ing which not only continues but steadily increases.

In the east it hardly seems that he has taken the measure of the position even now. It is not only East Prussia that is threatened. It is not only a double threat that faces him. Apart from the attack on East Prussia and the advance across the Vistula towards Silesia there is a spearhead in the centre that, through Warsaw, points directly at Berlin. The pace on the eastern front has slowed down somewhat lately; but that is rather more ominous for the Germans than if the Russians had attempted to pursue their thrust- ing attack without a pause for reorganisation. There are at least two months of good campaigning weather; and there are other sectors which will yet see armies on the march. Almost unnoticed another army has appeared on Konev's left; and there are others still waiting for the appropriate moment. Alexander is also apparently drawing his breath for the next pounce.

It is against this background that the battle of France is taking shape. Hitler's strategy consisted of holding up the Russian advance and then, after defeating the Allies in the west, turning back towards the east to deal with Stalin. None of these hopes. has been fulfilled. The Russians have been slowed down but not stopped. The Allied br:dgehead has developed into a western front which, less than too miles from Paris, is moving eastwards. Kluge was never more under the necessity to conform to Montgomery's movements than now. He struck at Avranches because he must. That was on Sunday night. The following night Montgomery launched the Canachans south from Caen ; and Kluge must be conscious of the perils of his position there. He must hold on but not too long. He can recognise the possibility of a double envelopment develop- ing if the hinge were to be broken through before he can withdraw from the south-east. As usual in this war the German soldiers have to, pull their leaders' chestnuts out of the fire. The next few weeks will show how far they can accomplish this perilous task.