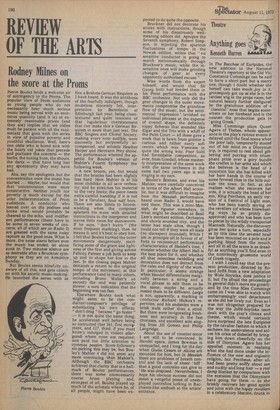 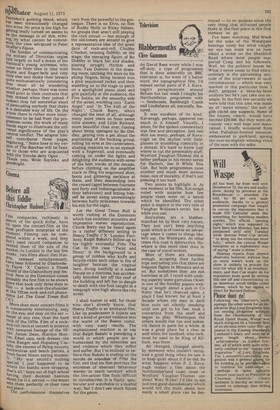 In The Bacchae of Euripides, the new addition to the National Theatre's repertory at the Old Vic, Constance Cummings can be said to have a short part but a merry one, though I doubt whether she herself can take much ,joy in it, grotesquely got up as she is in the tattiest wig in the props room, her natural beauty further disfigured by the gratuitous addition of a ' classical' nose that begins somewhere on her forehead and is the nearest the production gets to going Greek.'

Miss Cummings plays Queen Agave of Thebes, whose appear ance in the play's riotous events is

delayed until the final scene when the poor lady, temporarily stoned out of her mind on a Dionysian trip, is required to reel about gibbering and purring with triumphant pride over a gory bundle she cradles in her arms and which she believes is the head of a mountain lion she has killed with her bare hands in the course of some fevered rites in the hills outside the town. In fact, as she realises when she recovers her wits, it is actually the head of her son, King Pentheus, an early version of a Festival of Light man, who has been nastily spying on the revellers (of whose freewheeling ways he so primly disapproves) and who has been torn to pieces by the wildly transported Maenads. Naturally, the discovery gives her quite a turn, especially as by this time the severed head has been mounted on a pole and is gushing blood from the mouth, and all in all the scene is as dreadful as anything you'll find even in the notoriously gruesome world of Greek tragedy. I wish I could say that the present production, directed by Roland Joffe from a new adaptation by Wole Soyinka, does justice to it; but I'm afraid the proceedings in general didn't move me greatly, and by the time Miss Cummings came on 1 was able to watch with embarrassingly cool detachment as she did her lively nut. Even so was not altogether prepared for the way the Joffe-SoyInka team dealt with the play's climax and theme, which would certainly have surprised the late Euripides by the cavalier fashion in which it eschews his ambivalence and solves his crisis of disbelief by bringing him down cheerfully On the side of Dionysus. Agave has her appalled moment in realising what she had done under the influence of the new and orgiastic religion, but Pentheus, after all, had been pretty sniffy about sex and nudity and long hair — a real damp blanket by comparison with the ecstasies that the Dionysians have going for them — so she briskly recovers her good spirits and joins with the happy revellers in a celebratory libation, drunk in

entheus's gushing blood, which Etas been miraculously changed into wine. No price is too high for getting really turned on seems to he the message in all this, echoing, by what cannot be coincidence, the view advanced in Peter Shaffer's Equus.

The burden of communicating the ecstasy of Dionysian orgies falls largely on half a dozen of the National's young actresses, who Come on from time to time with drums and finger-bells and very little else and shake their breasts quite enthusiastically considering they must all be wondering Whether, perhaps, there was some slnall print in their contracts that they missed when they joined. I suspect they fall somewhat short 9f Persuading anybody that theirs Is a desirable way of life. On the Whole there is rather more entertainment to be had from the programme notes, the work of many hands eager to illuminate the universal significance of the play's central conflict. The adapter himself contributes three pages, beginning, "Some lines in my version of The Bacchae will be famiJar to those who are acquainted With the Yoruba deity Ogun . ." Thank you, Wole Soyinka and goodnight.