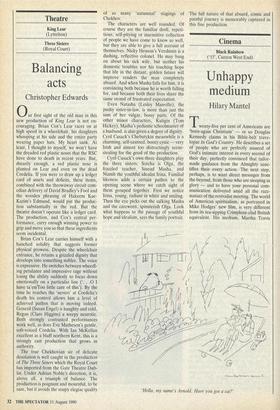 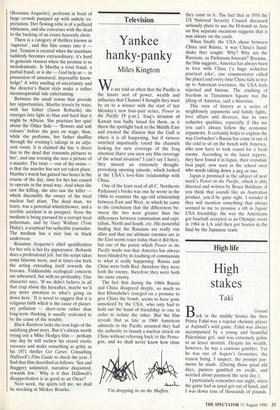 Twenty-five per cent of Americans are 'born-again Christians' — or so Douglas Kennedy claims in his Bible-belt trave- logue In God's Country. He describes a set of people who are perfectly assured of God's intimate interest in every second of their day, perfectly convinced that tailor- made guidance from the Almighty sanc- tifies their every action. The next step, perhaps, is to want direct messages from the beyond, from those who are sleeping in glory — and to have your personal com- munication delivered amid all the razz- matazz of the revivalist meeting. The world of American spiritualism, as portrayed in Mike Hodges' new film, is very different from its tea-sipping Crimplene-clad British equivalent. His medium, Martha Travis

(Rosanna Arquette), performs in front of large crowds pumped up with unholy ex- pectation. Her flowing robe is of a pellucid whiteness, and she converses with the dead to the backing of an ersatz heavenly choir.

There is a category of thrillers known as `superior', and this film comes into it just. Tension is created when the mundane suddenly becomes extraordinary; it's hard to generate tension when the premise is so melodramatic. Is Martha a total fraud, a partial fraud, or is she — God help us — in possession of unnatural, impossible know- ledge? A witty seeding of uncertainty and the director's fluent style make a rather inconsequential tale entertaining.

Between the small towns that provide her opportunities, Martha travels by train; with her father (Jason Robards) she emerges into light so blue and hard that it might be African. She practices her spiel about the Other Side — `flowers and soft colours' before she goes on stage; then, while she performs, her father shuffles through the evening's takings in an adja- cent room. It is claimed she has 'a direct line to the dead that transmits pictures to her', and one evening she sees a picture of a murder. The twist — one of the twists is that the murder has not yet taken place. Martha's watch has gained two hours in the course of the day, time for her has ceased to operate in the usual way. And when she saw the killing, she also saw the killer which discomfits the owner of the local nuclear fuel plant. The dead man, we learn, was a potential whistleblower, and a terrible accident is in prospect. Soon the medium is being pursued by a corrupt local policeman, and by Gary Wallace (Tom Hulce), a sceptical but seducible journalist. The medium has a nice line in black underwear.

Rosanna Arquette's chief qualification for her role is her fey appearance. Robards does a professional job, but the script takes some fulsome turns, and at times one feels the acting extending itself towards the bravura. Fashionable ecological concerns are rehearsed, but with no profundity. One character says, `If we didn't believe in all that crap about the hereafter, maybe we'd pay more attention to what's going on down here.' It is novel to suggest that it is religious faith which is the cause of planet- ary pollution — short-term rather than long-term thinking is usually reckoned to be the cause of the trouble.

Black Rainbow lacks the iron logic of the satisfying ghost story. But it's always worth trying out a Mike Hodges film — perhaps one day he will eschew his recent exotic excesses and make something as gritty as his 1971 thriller Get Carter. Consulting Halliwell's Film Guide to check the year, I find that film described as follows: `Sex and thuggery unlimited, narrative disjointed, rewards few.' Why is it that Halliwell's disapprobation is as good as an Oscar?

Next week, the spirits tell me, we shall be mocking at Mickey Rourke.