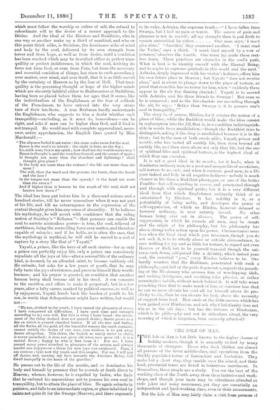 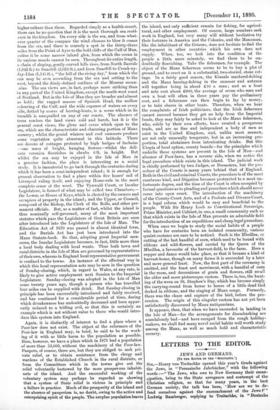 THE ISLE OF MAN.

THE Isle of Man is but little known to the higher classes of holiday-makers, though it is annually visited by many thousands of strangers. Those who flock thither are almost all persons of the lower middle-class, and operatives from the thickly populated towns of Lancashire and Yorkshire. They make but a short stay, they ramble over the island, and their loud, provincial tones are heard in boisterous merriment. In themselves, these people are a study. You see the best of the working-class of the North away from their factories and work- shops, and though your taste may be oftentimes offended at rude jokes and noisy merriment, yet they are essentially an independent and hard-working class, even in their amusements.

But the Isle of Man may fairly claim a visit from. person of higher culture than these. Regarded simply as a health-resort, there can be no question that it is the most thorough sea resid- ence in the kingdom. On every side is the sea, and from what- ever quarter of the compass the wind chooses to blow it comes from the sea, and there is scarcely a spot in the thirty-three miles from the Point of Ayre to the bold cliffs of the Calf of Man, unless it be some narrow inland glen, from which the ocean in its various moods cannot be seen. Throughout its entire length, a chain of sloping, gently-curved hills rises, from North Barrule (1,842 ft.) to Snaefell (2,024 ft.), and from Snaefell to Cronk-ny- Jay-Llaa (1,145 ft.), "the hill of the rising day," from which the sun may be seen ascending from the sea and setting to the west, beyond the dimly-defined outlines of the Mourne moun- ains. The sea views are, in fact, perhaps more striking than in any part of the United Kingdom, except the north-west coast of Scotland. But in the Isle of Man they are broader and almost as bold ; the rugged masses of Spanish Head, the mellow colouring of the Calf, and the wide expanse of waters on every side, dotted by scores of herring-boats, is a scene which in its breadth is unequalled on any of our coasts. The absence of trees renders the land views cold and harsh, but it is the general coast views, the glens and coves which open to the sea, which are the characteristic and charming portion of Manx scenery ; whilst the genial winters and cool summers produce some vegetation quite abnormal in this latitude. There are dozens of cottages protected by high hedges of fuchsias —one mass of bright, hanging flowers—whilst the deli- cate veronica flourishes in shrubs 0 ft. in height. But whilst the sea may be enjoyed in the Isle of Man in a genuine fashion, the place is interesting as a social study. It is immaterial to go back through the centuries during which it has been a semi-independent island ; it is enough for present observation to find a place within five hours' sail of Liverpool ruling itself, and enjoying Home-rule in the most complete sense of the word. The Tynwald Court, or Insular Legislature, is formed of what may be called two Chambers,— the Lower, or House of Keys, which is elected by the owners and occupiers of property in the island; and the Upper, or Council, composed of the Bishop, the Clerk of the Rolls, and other per- manent officials. But, as a matter of fact, whilst the island is thus nominally self-governed, many of the most important statutes which pass the Legislature of Great Britain are soon after introduced into the Legislature of the Isle of Man. The Education Act of 1870 was passed in almost identical form, and the Burials Act has just been introduced into the Manx Statute-book. So that, adopting great Imperial mea- sures, the Insular Legislature becomes, in fact, little more than a local body dealing with local wants. Thus both town and rural districts in the Isle of Man are governed by representatives of their own, whereas in England local representative government is confined to the towns. An instance of the effectual way in which this local representation acts may be seen in the question of Sunday-closing, which, in regard to Wales, at any rate, is likely to give active employment next Session to the Imperial Legislature. Sunday-closing was adopted in the Isle of Man some twenty years ago, though a person who has travelled four miles can be supplied with drink. But Sunday-closing in principle has been successfully introduced and fairly received, and has continued for a considerable period of time, during which drunkenness has undoubtedly decreased and been appar- ently reduced to a trifling evil, so that this is certainly an example which is not without value to those who would intro- duce this system into England.

Again, it is distinctly of interest to find a place where a Poor-law does not exist. The object of the reformers of the Poor-law in England may, in brief, be said to be the work- ing of it with as little harm to the population as possible.

Here, however, we have a place which in 1871 had a population of more than 63,000, without the machinery of the Poor-law.

Paupers, of course, there are, but they are obliged to seek pri- vate relief, or to obtain assistance from the clergy and wardens of the Established Church in the rural districts, or from the Committees which in the towns give out the relief voluntarily bestowed by the more prosperous inhabit- ants of the island. And the successful working of the voluntary system may perhaps be regarded as showing that a system of State relief is vicious in principle and a failure in practice. Much of the prosperity of the island and the absence of pauperism is, no doubt, owing to the active and enterprising spirit of the people. The surplus population leaves the island, and only sufficient remain for fishing, for agricul- tural, and other employment. Of course, large numbers seek work in England, but very many will without hesitation try their fortunes in America and the Colonies, and the Manxman, like the inhabitant of the Grisons, does not hesitate to find the employment in other countries which his own does not supply. When, too, we look into the condition of the people a little more minutely, we find them to be un- doubtedly flourishing. Take the fishermen, for example. The object of the Manx fisherman seems to be to buy a plot of ground, and to erect on it a substantial, two-storied, stone cot- tage. In a fairly good season, the Kinsale mackerel-fishing and the Manx herring-fishing in the summer and autumn will together bring in about 240 a man ; and as a boat and nets cost about 2600, the average of seven who man and own a boat will often in three years pay the preliminary cost, and a fisherman can then begin to lay by money, or to take shares in other boats. Therefore, when we hear the complaints of Irish politicians, that the Irish fishermen cannot succeed because they get no help from the Imperial funds, they may fairly be asked to look at the Manx fishermen, who, solely by their own efforts, have created a prosperous trade, and are as fine and independent a body of men as exist in the United Kingdom, and, unlike most seamen, are not only unusually temperate, but in an increasing pro- portion, total abstainers from intoxicating drinks. But this Utopia of local option, county boards—for the principles which underlie these systems are present in the Isle of Man—and absence of Poor-laws, has a reverse side, when we notice the legal procedure which exists in this island. The judicial work is chiefly performed by two Judges, or Deemsters, but the pro- cedure of the Courts is many years behind that of England. Both in the civil and criminal Courts, the procedure is of the most cumbrous kind, and litigation becomes protracted to a most un- fortunate degree, and the time of the Court is often occupied by formal questions as to pleading and procedure which should never come into open court. The introduction of the machinery of the County-Court Acts, and of a Probate and Divorce Court, is a legal reform which would be easy and beneficial to the people. With Sir Henry Loch as Constitutional Sovereign, Prime Minister, and Cabinet, in one, a small community such as that which exists in the Isle of Man presents an admirable field for the introduction of an expeditious and cheap legal procedure.

When once we begin to study the social habits of a people who have for centuries been an isolated community, various quaint customs are sure to be noticed. Such is the Mheillea, or cutting of the last handful of corn, which used to be bound with ribbons and wild-flowers, and carried by the Queen of the Mheillea, a favourite of the harvest-field, to the farm. Here a supper and dance would take place, so that it became a kind of harvest-home, though on many farms it is succeeded by a later and more general feast. Now, the first part of the ceremony is omitted, and the feast and merriment, with a handful of corn in the room, and decorations of grain and flowers, still recall the older and more picturesque custom. There is, too, the hunt- ing of the wren on St. Stephen's Day, which has become simply the carrying-round from house to house of a little dead bird. decked in ribbons, and the singing of Manx songs. Formerly, there was the chase and capture of the bird, before the pro- cession. The origin of this singular custom has not yet been satisfactorily discovered by Manx antiquarians.

It appears, then, that when we have succeeded in landing in the Isle of Man—for the arrangements for disembarking are scandalously bad—and have escaped from the rough holiday- makers, we shall find many novel social habits well worth study among the Manx, as well as much bold and characteristic scenery.