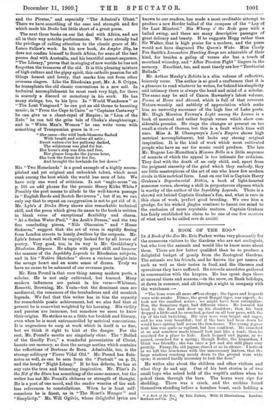 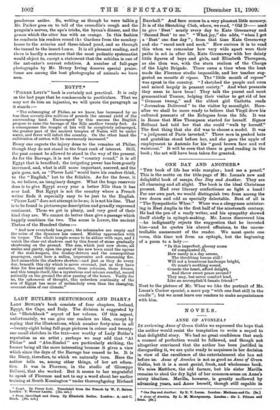 In A Book of the Zoo Mr. Eric Parker writes very pleasantly for the numerous visitors to the Gardens who are not zoologists, but who love the animals and would like to know more about them. There are few better qualified than he to produce a delightful budget of gossip from the Zoological Gardens. The animals are his friends, and he knows the pet names of each as well as their tastes in food, and the illnesses and operations they have suffered. He records anecdotes gathered in conversation with the keepers. He has spent days there at unusual times and seasons,—in the snow, on Bank holidays, at dawn in summer, and all through a night in company with the watchman :—

"The lions were all more °flyless sleepy; the tigers and leopards were wide awake. Prince, the great Bengal tiger, was superb ; ho took not the smallest notice ; we might have been caterpillars. Don, the Sumatran tiger, had different views. He lowered his head to the floor and drew up his shoulders ; then his back dropped a little and he crouched, poised on all four paws, with the tip of his tail twitching. His eyes were very bright and eager, and he was very beautiful ; but if the bars had been down he■ would have sprung half across the lion-house. The young jaguar next him was quite as vigilant, but less confident. He crouched at us and somehow made himself look just like a toad ; then ho, searched for a place to hide. Each leopard and jaguar, as wo passed, crouched for a spring ; though Nellie, the leopardess, I think was friendly ; she was once a pet and sho still plays very prettily. Fanny, the old jaguar, stared at us in silence. I noticed as we left the lion-house with the unnecessary lantern, that tho large windows reaching nearly down to the ground were wide open; it seemed hardly necessary to lock the door."

He writes also about the children and other visitors and what they do and say. One of his best stories is of two small boys who seized hold of the wapiti's antlers when he poked .them through the bars. The horns were ripe for shedding. There was a crack, and the urchins found themselves standing before a hornless beast, each holding a

A Book of tius Zoo.

ponderous antler. So, writing as though he were talkin g Mr. Parker goes on to tell of the crocodile's cough and the penguin's nerves, the ape's tricks, the hyena's dinner, and the games which the otter has with an orange. In this fashion he conducts his readers round tin Gardens from the monkey- house to the aviaries and three-island pond, and so through the tunnel to the insect-houae. It is all pleasant reading, and there is hardly a sentence that the most pedantic systematist would object to, except a statement that the echidna is one of the ant-eater's nearest relatives. A number of full-page photographs by Mr. Henry Irving deserve special praise. Some are among the best photographs of animals we have ieen.