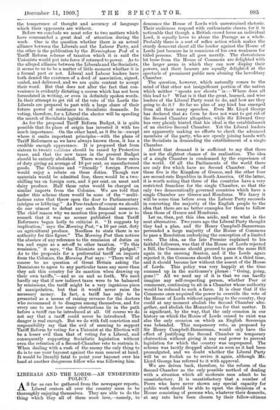 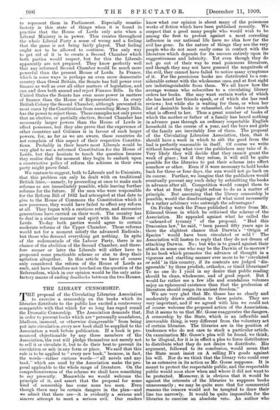 AS far as can be gathered from the newspaper reports, • Liberal orators all over the country seem to be thoroughly enjoying themselves. They are able to do the thing which they all of them most - love,—namely, to denounce the House of Lords with unrestrained. rhetoric. Their audiences respond with enthusiastic cheers, for it is noticeable that though a British crowd loves an individual Lord, it equally loves to abuse the Peerage as a whole. Probably there is a sort of reflex action which makes the sturdy democrat shout all the louder against the House of Lords just because he is conscious of his own weakness for titled persons. Thus all goes merrily. The rhetoricians let loose from the House of Commons are delighted. with the larger arena in which they can now display their powers, and their hearers are equally delighted at the spectacle of prominent public men abusing the hereditary Chamber.

The question, however, which naturally comes to the mind of that other not insignificant portion of the nation which neither "spouts nor shouts" is :—Where does all this lead to ? What is it that the great, learned, and wise leaders of the Liberal Party want to do, and how are they going to do it ? So far no plan of any kind. has emerged. from all their many speeches. Even Mr. Lloyd. George has declared. that ia form he does not want to get rid. of the Second Chamber altogether, while Sir Edward Grey has very plainly hinted that his ideal is the establishment of an elective Second. Chamber. Yet the Liberal leaders are apparently making no efforts to check the advanced members of the party, who are openly joining hands with the Socialists in demanding the establishment of a single Chamber.

About that demand it is sufficient to say that there is not the slightest chance of its realisation. The idea of a single Chamber is condemned by the experience of the world. Of all the Parliaments of the world. there are only five which have no Second. Chamber. One of these five is the Kingdom of Greece, and the other four are second-rate Republics in South America. Of the latter, it is worth noting that three of the countries have a very restricted franchise for the single Chamber, so that the only two democratically governed countries which have a single Chamber are Greece and Honduras. We fancy it will be some time before even the Labour Party succeeds in converting the majority of the English people to the idea that there are no better examples for them to follow than those of Greece and. Honduras.

Let us, then, put this idea aside, and see what is the next alternative. Two years ago the Liberal Party thought they had a plan, and Sir Henry Campbell-Bannerman persuaded. a large majority of the House of Commons to pass a Resolution embodying the conception of a limited- veto. The idea, as the late Premier explained to his faithful followers, was that if the House of Lords rejected a Bill, the Commons should. proceed to pass the same Bill again in the ensuing Session, and. if the Lords again rejected. it, the Commons should then pass it a third. time, and it should become law without the assent of the House of Lords. This policy was very happily at the time summed up in the auctioneer's phrase : "Going, going, gone !" All we need say of it is that we can hardly imagine any self-respecting person, whether Peer or commoner, continuing to sit in a Chamber whose authority would be reduced to such a farce. It is clear that if the Commons once acquired the power to override the veto of the House of Lords without appealing to the country, they could at any moment abolish the Second Chamber alto- gether, and abolish the Monarchy too for that matter. It is significant, by the way, that the only occasion in our history on which the House of Lords ceased to exist was also the only occasion on which an English Sovereign was beheaded. This suspensory veto, as proposed. by Sir Henry Campbell-Bannerman, would only have the effect of justifying the Second Chamber in temporary obstruction without giving it any real power to prevent legislation for which the country was unprepared. The scheme was tacitly dropped. almost as soon as it had been promulgated, and we doubt whether the Liberal Party will be so foolish as to revive it again, although Mr. Lloyd. George has referred to it with approval.

We are driven back, therefore, to the reform of the Second Chamber as the only possible method of dealing with a situation which all moderate men admit to be unsatisfactory. It is unsatisfactory that a number of Peers who have never shown any special capacity for public work should be able to upset the decisions of a House consisting of persons who, whatever their demerits, at any rate have been chosen by their fellow-citizens to represent them in Parliament. Especially unsatis- factory is this state of things when it is found in practice that the House of Lords only acts when a Liberal Ministry is in power. This creates throughout the whole Liberal Party a sense of wrong and a feeling that the game is not being fairly played. That feeling ought not to be allowed to continue. The only way to get rid of it is to create a Second Chamber which both parties would respect, but for this the Liberals apparently are not prepared. They know perfectly well that any reformed Second Chamber would be much more powerful than the present House of Lords. In France, which in some ways is perhaps an even more democratic country than Great Britain, the Senate has full power over finance as well as over all other matters of legislation, and. can and does both amend and reject Finance Bills. In the United States the Senate has even more power in matters of finance than the House of Representatives. In every British Colony the Second Chamber, although prevented in most cases by the Constitution from amending Money Bills, has the power to reject them. These examples not only prove that an elective, or partially.elective, Second Chamber has necessarily larger powers than the House of Lords in effect possesses, but they also prove that the experience. of other countries and Colonies is in favour of such larger powers, for, as far as we are aware, these countries do not complain of this aspect of their respective Constitu- tions. Probably in their hearts most Liberals would be very glad to see a reformed Constitution for the House of Lords, but they hesitate to touch the question because they realise that the moment they begin to embark upon a constructive policy of reform the schisms in their own party might prove fatal.

We venture to suggest, both to Liberals and to Unionists, . that this problem can only be dealt with on traditional British lines,—namely, by proceeding at once to make such reforms as are immediately possible, while leaving further reforms for the future. If the men who were responsible for the Reform Bill of 1832 had attempted at that date to give to the House of Commons the Constitution which it now possesses, they would have failed to effect any reform at all. They began with a cautious reform, and successive generations have carried on their work. The country has to deal in a similar manner and spirit with the House of Lords. To-day both parties would agree to certain moderate reforms of the Upper Chamber. These reforms would not for a moment satisfy the advanced Radicals ; but those who demand everything get nothing. In spite of the rodomontade of the Labour Party, there is no chance of the abolition of the Second Chamber, and there- fore sooner or later the Liberals will either have to propound some practicable scheme or else to drop their agitation altogether. In this article we have of course only considered the reform of the House of Lords as such, and have therefore not touched on the question of the Referendum, which in our opinion would be the only satis- factory means of ending deadlocks between the two Houses.