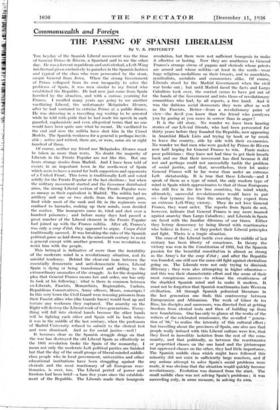 THE PASSING OF SPANISH LIBERALISM Commonwealth and Foreign

By V. S. PRITCHETT THE heyday of the Spanish Liberal movement was the time of General Primo de Rivera, a Spaniard said to me the other day. He was a fervent republican and anti-clerical, a Left-Wing intellectual given exclusively to paradox in the Spanish fashion and typical of the . class who were persecuted by the stout, simple General from Jerez. When the strong Government of l'rimo collapsed from its own incapacity to solve the problems of Spain, it was men similar to my friend who established the Republic. He had now just come from Spain horrified by the situation, and with a curious yearning for Franco. I recalled many years ago going to see another vacillating Liberal, the unfortunate Melquiades Alvarez, after he had ventured to criticise Primo at a public dinner. He was shivering in a travelling rug waiting to be arrested while he told with pride that he had made his speech in such guarded, euphemistic and even allegorical terms that no one would have been quite sure what he meant. He vacillated to the end and now the militia have shot him in the Circe! Modelo. The Spanish weakness for a general is perhaps inevit- able; active and retired, there are, or were, some six or eight hundred of them.

Of course, neither my friend nor Melquiades Alvarez must be taken as more than texts. No doubt the majority of Liberals in the Frente Popular are not like this. But one hears strange stories from Madrid. And I have been told of events in an important town in the north-west of Spain which seem to have a moral for both supporters and opponents of a United Front. This town is traditionally Left and voted solidly for the Frente Popular at the last elections ; but when the military movement started and the Governor distributed arms, the Strong Liberal section of the Frente Popular were as uneasy as their equivalent in Madrid. The militia had no artillery and one or two shells from the insurgent guns, fired while insist of the rank and file in the regiments were confined to barracks, making up their minds, soon decided the matter. The insurgents came in, tried and shot over a hundred prisoners ; and before many days had passed a great number of the Liberal clement in the Frente Popular had joined up with the Franco militia. After all, Franco's was only a coup d'etat, they appeared to argue. Coups d'etal traditionally succeed. It was breaking the rules of the Spanish political game as laid down in the nineteenth century to resist a general except with another general. It was revolution to resist him with the people.

This betrayal is indicative of more than the instability of the moderate mind in a revolutionary situation, and its suicidal tendency. Behind the clear-cut issue between the essentially democratic and anti-democratic forces, Liberal Spain is dying or being transformed and adding to the extraordinary anomalies of the struggle. As for the despairing plea that General Franco means law and order, one has only to look at his following ; what is there in common between ex-Liberals, Fascists, Monarchists, Regionalists, Carlists, Republican Conservatives, Army officers, Moors, conscripts ? In this very-town the Civil Guard were rescuing prisoners from their Fascist allies who (the Guards knew) would beat up and torture any workmen they captured. The anarchy on the Right will destroy the Liberal work of two generations. Every- thing will fall into clerical hands because the other hands will be fighting each other and Spain will be back where it was in the middle of the last century, when the professors of Madrid University refused to submit to the clerical test and were dismissed. And as for social justice—well !

• It becomes clear as the Spanish struggle drags on that

the war has destroyed the old Liberal Spain as effectively as the 1931 revolution broke the Spain of the monarchy. I mean not only the moderate Left political parties are finished but that the day of the small groups of liberal-minded middle- class people who in local government, universities and other educational institutions have been struggling against the clericals and the most reactionary of all European reac- tionaries, is over, too. The Liberal period of power and freedom had been brief—a bare five years since the establish- ment of the Republic: The .Liberals •made their bourgeois

revolution, but there were not sufficient bourgeois to make it effective or lasting. Now they are anathema to General Franco's strange circus of pagans and clericals whose priests are armed and whose militia—at least in the north—wear huge religious medallions on their breasts, and to anarchists, syndicalists, socialists and communists alike. Of course, Liberals stood by the Madrid Government when the civil war broke out ; but until Madrid faced the facts and Largo Caballero took over, the control :ems to have got out of the hands of the Government and into those of revolutionary committees who had, by all reports, a free hand. And it was the dubious social democrats they were after as well as the Fascists. Better—from a revolutionary point of view—the devil you know than the friend who paralyses you by gazing at you more in sorrow than in anger !

It is the old story. No wonder we have been hearing stories of our Liberal friends, who had been persecuted for thirty years before they founded the Republic, now appearing in Anarchist Black Lists and trying by hook or by crook to leave the country, side by side with their ex-enemies. No wonder we find men who were gaoled by Primo de Rivera now half hoping for General Franco to win. Panic makes poor politicians : they have not had time to get their breath back and see that their movement has died because it did not and perhaps could not successfully tackle the problem of social justice, and that, nevertheless, their lot under General Franco will be far worse than under an extreme Left dictatorship. It is true that these Liberals—and I speak of them as a type of mind, the only modern type of mind in Spain which approximates to that of those Europeans who still live in the few free countries, the mind which, ultimately, successful revolutionaries would have to put on—fear tyranny less than the anarchy they expect from an extreme Left-Wing victory. They do not love General Franco, they want order. The reports from Spain do not, however, indicate that General Franco is any more insured against anarchy than Largo Caballero ; and Liberals in Spain are faced with the familiar dilemma of our times. Either they, betray democracy by being liberal with reactionaries who believe in force ; or they pocket their Liberal principles and fight. Theirs is a tragic situation.

The crux of the Liberal battle ever since the middle of last century has been liberty of conscience. In theory the victory was won in the Constitution of 1981, but the Spanish passion for the beautiful constitution is almost as strong as the Army's for the coup d'etal ; and after the Republic was founded, one still saw the same old fight against clericalism going on. The Liberals were not only trying to diminish illiteracy ; they were also attempting in higher education— and this was their characteristic effort and the scene of their most conspicuous success—to release the creativeness of the shackled Spanish mind and to make it modern. It must not be forgotten that Spanish reactionaries hate Western civilisation. All through Spanish polemical literature in the last generation one finds this controversy between Europeanism and Africanism. The work of Giner de los Rios, his disciples and successors, was directed first at getting freedom from clerical tests and then of building up from new foundations. One has only to glance at the works of the writers of the celebrated renaissance, the so-called " genera- tion of '98," to realise the intensity of this cultural effort ; but travelling about the provinces of Spain, one also saw that people really imbued with this Liberal culture were few, that they lived in incredible isolation from the rest of the com- munity, and that politically, as between the reactionaries or propertied classes on the one hand and the picturesque but oppressed classes on the other, they had little importance. The Spanish middle class which might have followed this minority did not exist in sufficiently large numbers, and if any serious attempt to solve Spain's social problems were made, it was obvious that the situation would quickly become revolutionary. Evolution was damned from the start. The small middle class was not solving Spain's problems ; it was succeeding only, in some measure, in solving its own,