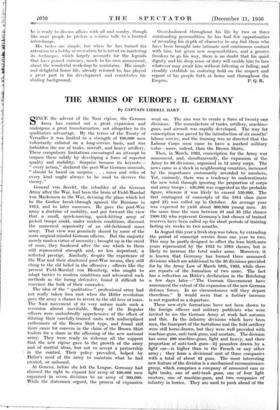 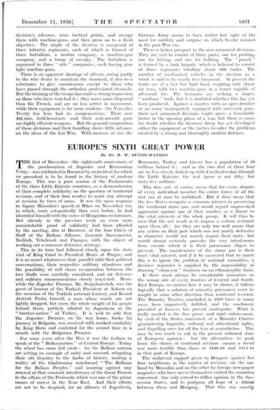 THE ARMIES OF EUROPE: H. GERMANY

General von Seeckt, the rebuilder of the German Army after the War, had been the brain of Field-Marshal von Mackensen in the War, devising the plans which led to the Gorlice break-through against the Russians in 1915, and to later successes. He gave the post-War army a doctrine of mobility, and put forward the view that a small, quick-moving, quick-hitting army of picked troops could, under modern conditions, discount the numerical superiority of an old-fashioned mass army. That view was genuinely shared by some of the more original-minded German officers. But the majority merely made a virtue of necessity; brought up in the creed of mass, they hankered after the size which to them still represented strength and, no less important, a reflected prestige. Similarly, despite the experience of the War and their straitened post-War means, they still clung to the old belief in the offensive ; officers like the present Field-Marshal von Blomberg, who sought to adapt tactics to modern conditions and advocated such methods as the luring defensive, found it difficult to convince the bulk of their comrades.

The idea of the " qualitative " professional army had not really taken firm root when the Hitler revolution gave the army a chance to revert to the old love of mass. The Nazi movement of its very nature made such a reversion almost inevitable. Many of the Regular officers were undoubtedly apprehensive of the effect of diluting their carefully-trained units with undisciplined enthusiasts of the Brown Shirt type, and found still more cause for concern in the claim of the Brown Shirt leaders for a share in the officering of the new national army. They were ready to welcome all the support that the new regime gave to the growth of the army and of martial ideas, but not to accept a partnership in the control. Their policy prevailed, helped by Hitler's need of the army to maintain what he had created, or unloosed.

- At Geneva, before she left the League, Germany had claimed the right to expand her arniy of 100,000 men organised- in seven divisions td an - army of 800,000. While the statesmen argued, the' process of expansion went on. The aim was to create a force of twenty-one divisions. The manufacture of tanks, artillery, machine- guns, and aircraft was rapidly developed. The way for conscription was paved by the introduction of six months' labour service, and the training was so directed that the Labour Corps soon came to have a marked military value—more, indeed, than the Brown Shirts.

Then, in March, 1985, conscription for the Army was announced, and, simultaneously, the expansion of the Army to 86 divisions, organised in 12 army corps. The news came as a shock in neighbouring countries, increased by the importance customarily accorded to numbers.

Yet, curiously, there was a tendency to underestimate the new total through ignoring the proportion of corps and army troops ; 450,000 was suggested as the probable figure, whereas it was likely to exceed 550,000. - The first contingent of conscripts of the 1914 class (now aged 21) was called up in October. An average year was expected to yield about. 800,000 young men. At the same time the men between 21 and 85 (the classes 1900-18) who represent Germany's lost classes of trained reserves have been called up for short periods of training lasting six weeks to two months.

In August this year a fresh step was taken, by extending the period of conscript service from- One year to two.

This may be partly designed to offset the lean birthrate years represented by the 1915 to '1919 classes, but is likely to increase the total under arms. Moreover; it is known that Germany has formed three armoured divisions which are additional to the 86 divisions provided for by the Army Law of March 16th,' 1985, while there are reports of the formation of two more: The fact has a reflection on Hitler's declaration- in the Reichstag a few days later—" The German Government have announced the extent of the expansion of the new German defence forces. In no circumstances will they depart therefrom." It would seem that a further increase is not regarded as a departure.

These new-style formations have not been shown to the foreign -officers and military publicists who were invited to see the German Army at work last autumn and this. In the infantry divisions Which have been seen, the transport of the battalions and the field artillery were still horse-drawn, but they were well provided with machine-guns, anti-tank guns, and mortars. The division has some 400 machine-guns, light and heavy, and their proportion of anti-tank guns-2f pounders drawn by a light car—is higher than in the French or any other army ; they form a divisional unit "of three companies with a total of about 42 guns. The most • interesting new feature of the division is a mechanised reconnaissance group, which comprises a company of armoured cars or light tanks, one of anti-tank guns, one of four light mortars, one of machine-guns, and two companies of infantry in lorries. They -are -used to push ahead of-the division's advance, seize tactical points, and , occupy them with machine-guns, and then press on to a fresh objective. The staple of the division is composed of three infantry regiments, each of which is formed of three battalions, a mortar company, a .machine-gun company, and a troop. of cavalry. The battalion is organised in three " rifle" companies, each having pine light machine-guns.

There is an apparent shortage of officers, owing partly to the wise desire to maintain the standard, if also to a reluctance to give commissions except to those who have passed through the orthodox professional channels. But the training of the troops has made a strong impression on those who have watched it ; they move more dispersed than the French, and are no less active in movement, while their equipment is far more modern—the Versailles Treaty has here had its compensations. Their new 105 ninp. field-howitzers and their anti-aircraft guns are highly efficient weapons. But the general composition of these divisions and their handling shows little advance on the ideas of the last War. With increase of size the German Army seems to have rather lost sight of the need for subtlety and surprise on which Seeekt ipsisted in the post-War era.

There is better prospect in the new armoured divisions. They are said to consist of three parts, one for probing, one for hitting, and one for holding. The " punch ." is formed by a tank brigade, which is believed to consist of three regiments totalling about 600 tanks. The number of mechanised vehicles in the division as a whole is said to be nearly two thousand. At present the tanks are of a fast but light kind, weighing only about six tons, with two machine-guns in a turret capable of all-round fire. The Germans are seeking a larger, " medium " tank, but it is doubtful whether this has yet been produced. Against a country with an open frontier or an army inadequately equipped with anti-tank guns, their new armoured divisions might prove a formidable factor in the opening phase of a wax., but there. is cause for doubt whether the German Army has yet developed either the equipment or the tactics to solve the problems created by a strong and thoroughly modern defence.