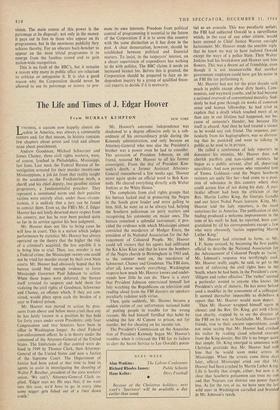 The Life and Times of J. Edgar Hoover

solete in America, was always a community venture and, for that reason, its history contains few chapters about arrest and trial and almost none about punishment.

Andrew Goodman, Michael Schwerner and James Chaney, three civil rights workers, were, of course, lynched in Philadelphia, Mississippi, last June. Last week the Federal Bureau of In- vestigation arrested for their murder twenty-one Mississippians, a job jot from that reality taught in the academies as the Faulknerian myth, a sheriff and his chief deputy, two gasoline station proprietors, a fundamentalist preacher. They represent a communal norm and their putative victims were entirely alien; under those circum- stances, it is unlikely that a jury can be found to convict them. Even so, the FBI's Mr. J. Edgar Hoover has not lately deserved more respect from his country, nor has he ever been pushed quite so far in its service against his best judgment.

Mr. Hoover does not like to bring cases he will lose in court. This is a nation which judges performance by statistics; Mr. Hoover has always operated on the theory that the higher the risk of a criminal's acquittal, the less sensible it is to bring him to trial. Then, too, murder is not a Federal crime; the Mississippi twenty-one could not be tried for murder except by their own State courts. Mr. Hoover had obviously hoped that his bureau could find enough evidence to force Mississippi Governor Paul Johnson to action. When those hopes were deferred, the bureau itself arrested its suspects and held them for violating the civil rights of Goodman, Schwerner and Chaney, an offence which, if they are con- victed, would place upon each the burden of a year in Federal prison.

Mr. Hoover was ,moved to action by pres- sures from above and below more cruel than any he has lately known in a position he has held for forty years under seven Presidents; only four Congressmen and two Senators have been in office in Washington longer. As chief Federal law-enforcement officer, he is in theory under the command of the Attorney-General of the United States. The limitations of that control were de- fined in 1949 by Thomas Clark, then Attorney- General of the United States and now a Justice of the Supreme Court. The Department of Justice had been asked at that time to lend its agents to assist in investigating the shooting of Walter P. Reuther, president of the auto workers' union. 'We can't,' Attorney-General Clark re- plied. 'Edgar says no. He says that, if we went into this case, we'd have to go in every time some nigger gets fished out of a river down south.'

Mr. Hoover's awesome independence was shadowed to a degree offensive only to a sub- ordinate of his extraordinary pride during the Kennedy administration, and only because an Attorney-General who was also the President's brother was a power even he had to consider. The accession of President Johnson, an old friend, restored Mr. Hoover to all his former sovereignty. From the day of President Ken- nedy's death, a former Assistant Attorney- General remembered a few weeks ago, 'Hoover never again spoke an official word to Bob Ken- nedy. He cleared everything directly with Walter Jenkins at the White House.'

The complaints from civil rights groups that his- bureau lacked zeal in protecting the Negro in the South grew louder and more galling to him. Still, he went on as he always had, helping the Southern policeman on petty matters and recognising his autonomy on major ones. The bureau remained a splendid instrument; it pro- vided the evidence with which Mississippi almost convicted the murderers of Medgar Evers, the president of its National Association for the' Ad- vancement of Coloured People. Mr. Hoover could tell visitors that his agents had infiltrated the Ku Klux Klan and that he knew the bombers of the Negro church in Birmingham in 1963 and, as the summer went on, the murderers of Schwerner, Chaney and Goodman. The FBI does, after all, know nearly everything; Washington respects how much Mr. Hoover knows and under- stands how little he can do. There is a story that President Johnson entertained himself last July watching the Republicans on television and reading aloud from the FBI dossiers on speakers peculiarly redolent with virtue.

Then, quite suddenly, Mr. Hoover became a sudden victim of , our unfortunate national habit of putting people in trouble for the wrong reasons. He had himself fortified that habit'by sending the late Al Capone to prison, not for murder, but for cheating on his income tax.

The President's Commission on the Assassina- tion of President Kennedy began Mr. Hoover's troubles when it criticised the FBI for its failure to alert the Secret Service to Lee Oswald's poten-

tial as an assassin. This was peculiarly unfair;• the FBI had subjected Oswald to a surveillance which, in the case of any other citizen, would have seemed to Chief Justice Warren outright harassment. Mr. Hoover made the sensible reply that he knew no way to have isolated Oswald except the ways of a police State. Then Walter Jenkins had his breakdown and Hoover sent him flowers. This was a decent act of friendship, even though it is not inconceivable that another government employee could have got his name in an FBI file for performing it.

Mr. Hoover had not for the prior decade said much in public except about dirty books, Com- munists, and wayward youths, and he had become a national reservoir of conventional morality. Sud- denly he had gone through six weeks of common sense and human fellowship; he had tried to explain that 'a death which touched more of us. than any in our lifetime had happened, not be- cause of someone's blunder, but because life itself is absurd. And then he had treated a sinner as he would any sick friend. The ,response, par- ticularly from his hagiographers, was so distress- ing that he panicked and went to talking in public as he used to in private.

He called a conference of lady reporters to denounce his enemies. Mr. Hoover does not cherish pacifists and non-violent resisters. he began as a public servant, after all, deporting anarchists. And now persons who reminded him of Emma Goldman—and the Negro Southern resisters are quite like her—had come to a posi- tion of substance in this country where they could accuse him of not doing his duty. A par- ticular affront had been the criticism of the Rev. Martin Luther King, the Georgia Gandhi and our latest Nobel Peace laureate. King, Mr. Hoover told the lady reporters, is the most notorious liar in America. The publication of this finding produced a welcome improvement in the tone of his mail; he had, he reported, been con- gratulated by all his correspondents except a few who were obviously 'racists supporting Martin Luther King.'

Mr. Hoover had returned to form, as Mr. I. F. Stone noticed, by becoming the first public official to describe the National Association for the Advancement of Coloured People as-`racist.' Mr. Johnson's response was terrifyingly cool. Mr. Hoover really ought, he said, to get to the work of enforcing the civil rights laws in the South, where he had been, in the President's view, 'diligent and rather effective.' The 'rather' seemed a particular wound to anyone who knows the President's style of rhetoric. He has never before used a modifier in the assessment of a colleague. It seemed thereafter impossible to disbelieve a report that Mr. Hoover would soon depart.

Then Mr. Hoover, wrapped himself again in silence; and the Rev. Dr. King, girt with Chris- tian charity, stopped. by to see the director of the FBI on his way to Stockholm. Mr. Hoover's' friends, true to their ancient superstitions, could not resist saying that Mr. Hoover had crushed his visitor by reading aloud selected excerpts from the King dossier. But life is no longer quite that simple. Dr. King emerged to announce with Christian gratitude that Mr. Hoover had told him that he would soon make arrests in Mississippi. When the arrests came three days later, official Mississippi cried out that Mr. Hoover had been crushed by Martin Luther King. Life is hardly that simple, either; but now it is clear that Southern policemen can trust no one and that Negroes can distrust one power liguie less. As for the rest of us, we have seen the last wild steer in Washington corralled and branded in Mr. Johnson's ranch.