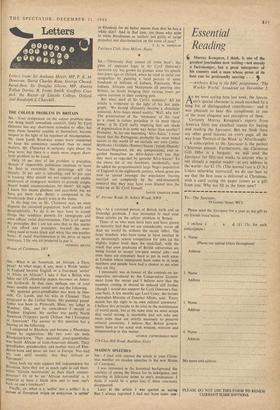 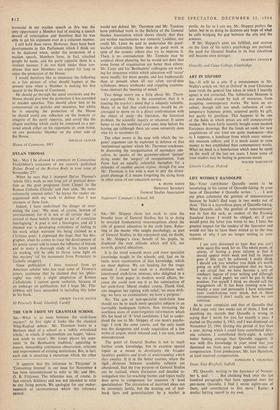 SIR,--I read with interest the article in your Christ- mas number on maiden speeches in the new House of Commons.

I was interested in the historical background, the courtesy of asking the House for its indulgence, and referring in felicitous terms to one's predecessor. I think it would be a great loss if these courtesies disappeared.

troversial in my maiden speech as this was the only opportunity a Member had of making a speech devoid of interruption and therefore that he was able to get his argument over in a coherent manner.

I still hold these views. However, there have been developments in this Parliament which I think are to be deplored when, under the protection of a maiden speech, Members have, in fact, attacked people by name, and the party opposite them in a virulent manner. I do not think under these con- ditions that new Members can expect for long to enjoy the protection of the House.

I would therefore like to enunciate the following as a fair picture of what should happen at the present time when a Member is making his first speech in the House of Commons.

He should go through the usual courtesies and the House should give him the protection it has accorded to maiden speeches. This should allow him to be controversial on policies and measures, but whilst he is enjoying the protection of the House he should avoid any reflection on the honesty or integrity of the party opposite, and avoid like the plague anything which could be construed as a per- sonal attack either on his opponents or, even worse, on any particular Member on the other side of the House.