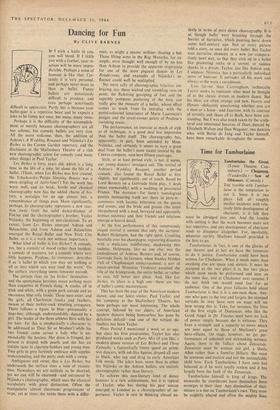 By C E BARNES Perhaps it is the difficulty of the accomplish- ment or merely because choreographers are all too solemn, but comedy ballets are very rare. All the more welcome, then, the addition of Ashton's A Wedding Bouquet and Nijinska's Les Biches to the Covent Garden repertory, and the disclosure at the Shaftesbury Theatre of a rich new choreographic talent for comedy (and many other things) in Paul Taylor.

Les Biches is forty years old, which is a long time in the life of a joke, let alone the life of a ballet. (Think, when Les Biches was first created, the Tchaikovsky/Petipa Sleeping Beauty was a mere stripling of thirty-four!) Yet the work has worn well, and its brisk, brittle and classical choreography now has the added charm of his- tory, a nostalgia for an age almost lost, a remembrance of things past. More significantly, perhaps, its choreography represents a new reac- tion away froth the solid dance-dramas of Fokine and the choreographer's brother, Vaslav Nijinsky, the beginning of neo-classicism. To an extent, from Les Biches emerged Ashton and Balanchine, and from Ashton and .Balanchine emerged the Royal Ballet and New York City Ballet, so it is a work not without importance.

What kind of ballet is Les Biches? A comedy, yes, but a comedy of mood rather than incident, a comedy of manners, yet a comedy where very little happens. Poulenc, its composer, describes it as 'a ballet in which you may see nothing at all or into which you may read the worst.' On the surface, everything seems innocent enough.

The curtain rises on 'lea biches' themselves-- and the eponymous heroines mean nothing more than coquettes in French slang. A studio, all in pink and white, with a green park outside and an enormous blue sofa inside. Three men enter, and the girls, all Charleston frocks and feathers, swoon at their turkey-cock strutting arrogance. There follows a figure in blue—presumably a page-boy, although, understandably, danced by a girl. The leader of the three athletes flirts with her (or him—for this is emphatically a character to be addressed as 'Dear Sir or Madam') while his two friends come across a lady who is un- mistakably the hostess. Her dress is fringed, her person is draped with pearls and she has an outsize taste in cigarette-holders and young men. Two girls in grey furtively embrace with sapphic understanding, and the party ends with a swing.

Ambiguous and sweet, that is Les Biches, but underneath the surface rises a vein of vicious- ness. Nowadays we are unlikely to be shocked, Yet we can still be charmed--and entranced by .Nijinska's choreography, which uses the classical vocabulary with great distinction. Often she manipulates almost classroom progressions of steps, yet at times she twists them with a differ-

ence, as might .a master milliner shaping a hat. Those lilting arms in the Rag Mazurka, for ex- ample, were thought well enough of by no less than Ashton to provide the apparent inspiration for one of the most piquant dances in Les Rendezvous, and examples of Nijinska's in- fluence could well be multiplied.

No mere tally of choreographic felicities em- bracing. say, those wicked and trembling runs on point, the flickering gossiping of feet and the superbly pompous posturing of the men, can really give the measure of a ballet, whose effect comes so much from its interplay with the pastel-coloured luxuriance of Marie Laurencin's designs and the street-corner gaiety of Poulenc's ravishing music.

The performance, an exercise as much of style as of technique, is a good deal less impressive than the ballet itself. The choreography -has, apparently, in part, been amended by Mme. Nijinska, and certainly it seems to vary a great deal from the ballet's most recent revival by the Cuevas company, seen here fifteen years ago.

Style, or at least period style, is not, it seems, our young dancers' strongest suit. The revival of Ashton's Wedding Bouquet, another period comedy, also found the Royal Ballet at first slightly, but significantly, out of touch. Based by Lord Berners on a Gertrude Stein play, ;t deals (most memorably) with a wedding in provincial France. The narrator—for Stein's tautological poetics insinuating truth are there in perm-11.j- comments with laconic bitterness on the guests and events, and the bride and groom (the latter encumbered with a mad, betrayed and apparently lesbian mistress) and their friends and relations emerge in horrid detail.

At the first performance of this sumptuously staged revival it seemed that only the narrator, Robert Helpmann, had the right spirit. Croaking balefully over his champagne, registering disasters with a malicious indifference, shadowing into sadness, Helpmann, like no one else, was the embodiment of Ashton, Berners and, of course, Gertrude Stein. In fairness, when Stanley Holden (full of Chaplinesque embarrassment, a sort of mean-spirited Monsieur Verdoux) assumed the role of the bridegroom, the entire ballet, or rather its cast, fell better into place. And, like Les Biches, its place is a high one—these are two of ballet's comic masterpieces.

This has been the year of the American modern dance, and our latest visitor, Paul Taylor, and his company at the Shaftesbury Theatre, has been perhaps our most interesting. The whole concept, beloved by our elders, of American modern dancers being humourless has gone by delicious default—and one of the wittiest de- faulters has been Taylor.

Piece Period I mentioned a week or so ago, but since his first programme, Taylor has also produced works such as Party Mix (if you like, a modern dance version of Les Biches) and Three Epitaphs, a fantastically funny spoof on primi- tive dancers, with ink-like figures, draped all over in black, who sag and drag to early American folk music. The jokes here, more than in either the Nijinska or the Ashton ballets, are entirely choreographic rather than literary.

To achieve this non-literary kind of dance humour is a rare achievement, but it is typical of Taylor, who has during his past season emerged in London as a choreographer of im- portance. Taylor is rare in thinking almost en-

tireiy in terms of pure dance choreography. It is as though ballet were breaking through the barrier of narrative, which painting burst down some half-century ago. Just as every picture told a story, so once did every ballet. But Taylor uses narrative elements in a new (or compara- tively new) way, so that they stick up in a ballet like projecting rocks in a torrent, or sudden shocks in a dream. Taylor. iust like Ashton and, I suppose. Nijinska, has a particularly individual sense of humour It pervades all his work and always to the work s enrichment.

Less far-out than Cunningham, technically Taylor seems to represent what must be thought of as the classic stream in modern dance. But his ideas are often strange and new. Insects and Heroes -delicately questioning whether you are a man or a louse--and Junction, with its contrast of serenity and chaos all to Bach, have been out- standing. But I was also much taken by the sculp- tural and emotional beauties of Duet, danced by Elizabeth Walton and Dan Wagoner, two dancers who, with Bettie de Jong and Taylor himself, have been remarkable throughout the season.