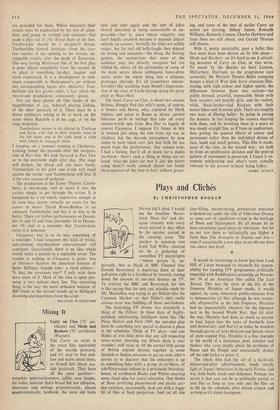 Carry on Cleo ('A' cer- tificate) and Mods and Rockers ('U' certificate) (Warner).

over and over again and the Sort of jokes Orwell described as being unassailable or un- provable—that is, jokes whose vulgarity you can't legally establish because it depends almost entirely on manner. Verbally the films are mildly vulgar, but for real old belly-laughs they depend on timing and innuendo—the shrug, the fleeting gesture, the mannerisms that some of the audience may not directly recognise but are tickled by, above all the personality of some of the main actors whose ambiguous fancy-dress antics make the whole thing into a dubious, grotesque charade. it's all (sometimes uncom- fortably) like watching Aunt Mabel's impersona- tion of the vicar or Uncle George doing his party piece as Mata Hari. • The latest, Carry on Cleo, is about two ancient Britons, Hengist Pod (his wife's name, of course, is Senna) and Horsa, who, captured by Mark Antony and taken to Rome as slaves, survive hilarious perils in settings that take off every ancient-world epic from Ben H ur to (again of course) Cleopatra. I suppose it's funny in bits (a woman just along the row from me was in stitches), but the charade atmosphere by now seems to have taken over just that little bit too much from the professional. Any minute now, I had a feeling, they'd all sit down for a studio tea-break—there's such a thing as being too re- laxed. -Also, the jokes ,(or was it just the actors using them?) really seemed almost too feeble three-quarters of the time to bear without groan- ing, and some of the best of earlier Carry on actors are missing. Sidney James, Kenneth Williams, Kenneth Connor, Charles Hawtrey and Joan Sims are still about; and Gerald Thomas still directs.

With it, pretty unsuitably, goes a ballet film that must have been chosen on its title alone— Mods and Rockers--as it's hard to see it attract- ing devotees of Carry on Cleo, or vice versa. To music by the Beatles (at least Lennon, McCartney, Harrison, as the programme says austerely), the Western Theatre Ballet company dances a kind of West Side Story situation illus- trating, with high colour and higher spirits, the differences between those two nations—the palely dressed, graceful, impeccable Mods with their scooters and pastelly girls, and the violent, virile, black-leather-clad Rockers with their motor-bikes and dramatic girls. There are roughly two ways of filming ballet: by going in among the dancers, in fact keeping the camera dancing with them, and by watching them in a more or less steady straight line, as if from an auditorium, thus getting the general effects of colour and movement rather than the individual drama of face, hand and small gesture. This film is made, most of the time, in the second way: we look in from an unobtrusive distance and the general pattern of movement is preserved. I found it ex- tremely exhilarating and, what's rarer, actually relevant to the present without being folksy.