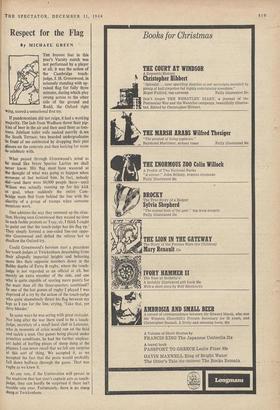 Respect for the Flag

If pandemonium did not reign, it had a working majority. The lads from Wadham threw their pip- 'tins of beer in the air and then used them as tom- toms. Jubilant toilet rolls snaked merrily dLwn the South Terrace; two bearded undergraduates in front of me celebrated by dropping their pint glasses on the concrete and then looking for more to celebrate with.

What passed through Greenwood's mind as he stood like brave Spurius Lartius we shall never know. His 'flag must have wavered at the thought of what was going to happen when someone at last noticed him. In fact, nobody did—and there were 60,000 people there—until Wilson was actually running up for his kick at goal, when suddenly the entire Cam- bridge team fled from behind the line with the alacrity of a group of tramps when someone mentions work.

One admires the way they summed up the situa- tion. Having seen Greenwood they wasted no time in such feeble protests as 'I say, sir, I think I ought to point out that the touch-judge has his flag up.' They simply formed a one-sided line-out oppo- site Greenwood and defied the referee 'not to disallow the Oxford try.

Could Greenwood's heroism start a precedent for touch-judges at Twickenham descending from their allegedly impartial heights and behaving more like their opposite numbers down in the flabby depths of Extra B rugby, where the touch- judge is not regarded as an official at all, but Merely an extra member of the side, and one Who is quite capable of scoring more points for the team than all the three-quarters combined? In one of the last games of rugby I played I was deprived of a try by the action of the touch-judge Who quite shamelessly thrust his flag between my legs as I ran for the line, crying, 'Take that, yer dirty bleeder.'

In some ways he was acting with great restraint. Not long after the war there used to be a touch- judge, secretary of a small local club in Leicester, who in moments of crisis would run on the field and tackle a man. Our games being played under primitive conditions, he had the further unpleas- ant habit of hurling pieces of sheep dung at the Players. I can never recall that we felt any surprise at this sort of thing. We accepted it, as we accepted the fact that the posts would probably fall down halfway..through the game. That- was rugby as we knew it.

At any rate, if. the Universities will persist in the tradition that last year's' captain acts as touch- judge, they can hardly be surprised if there isn't trouble one year. Fortunately, there is no sheep dung at Twickenham.