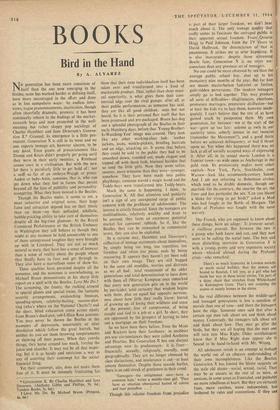 Bird in the Hand

NO generation has been more conscious of itself than the one now emerging in the Sixties; none has worked harder at defining itself, been more encouraged in the effort and done so in less compulsive ways: by endless inter- views, vague pronouncements, inarticulate, though often cheerfully dramatic, protests; it has been continually reborn in the findings of the market- research boys and now promoted in the well- meaning but rather sloppy pop sociology of Charles Hamblett and Jane Deverson's Genera- tion X.* Granted, its emergence is a little pre- mature. Generation X is still in its teens and no one expects teenage art, however sincere, to be any good. Even giants of precociousness like Donne and Keats didn't properly get going until they were in their early twenties; a Rimbaud comes once in a civilisation. But with the new lot there is peculiarly little to get hold of : not a sniff so far of an embryo-Waygh or proto- Auden or baby-Amis, someone, that is, who can get down what they feel in forms that persist beyond all the fuss of publidity and personality- mongering. What they have instead is the Beatles.

Though the Beatles make, it seems to me, a most seductive and original noise, their huge fame and attraction depend less on their music than on them—On their unfooled, nihilistic, bubble-pricking ability to take care of themselves despite all the big-time glamour. At the Royal Command Performance or the British Embassy in Washington they still behave as though they might at any moment be held answerable to one of those unimpressed toughies they were brought • up with in Liverpool. They are not so much natural as wary, they have less a sense of humour than a sense of reality about the people whom they finally have to face and get through to. They also have a marvellous sense of show biz.

These qualities have persisted despite all the nonsense, and the nonsense is overwhelming, as Michael Braun demonstrates in his sharp little report on a spell with the Beatles, Love Me Dat The screaming, the frenzy, the rushing around in special planes and special trains, the fantastic security arrangements, avalanching finances, spending-sprees, celebrity-baiting, success-plot- ting (who's where on the National Charts?) and the sheer, blind exhaustion come across nicely from Braun's dead-pan, sub-Lillian Ross account.- You may never be shown the Beatles at the moments of depressiOn, uncertainty or utter desolation which 'follow the great hurrah, but neither do you see them throwing temperaments or showing off their power. When they overdo things, they horse around too much, forcing the jokes and anarchy. It may not be all that inspir- ing, but it is as handy and unvicious a way as any of asserting their contempt for the social- financial thing.

Yet their contempt, alas, does not make them free of it. It must be intensely frustrating for

* GENERATION X. By Charles Hamblett and Jane Deverson. (Anthony Gibbs and Phillips, 9s. 6d.; Tandem Books, 3s. 6d.) t LOVE ME Do. By Michael Braun. (Penguin, 4s. 6d.) them that their zany individualism itself has been taken over and transformed into a kind of marketable product. That, rather than sheer musi- cal superiority, is what gives them their com- mercial edge over the rival groups, after all, at their public performances, as someone has said. they are like all good children: seen but not heard. So it is their personal flair itself that has been processed and pre-packaged. Braun has dug out a splendid photograph of the Beatles in their early Hamburg days, before that 'Young-Brother- Is-Watching-You' image was created. They look like any other working-class lads: leather jackets, jeans, winkle-pickers, bristling haircuts and an edgy, attacking air. It seems that before they could be sold to the public they had to be smoothed down, rounded out, made elegant and topped off with those lush, bisexual hairdos that so send the little girls. Now they seem softer, sweeter, more winsome than they were—younger, somehow. They have been made into public playthings; someone waved a magic wand and the Teddy-boys were transformed into Teddy-bears.

Much the same is happening. I think, to Generation X. All that attention and publicity isn't a sign of any unexpected surge of public concern with the problems of adolescence. The interest is strictly financial. Since the teenagers are multitudinous, relatively wealthy and want to be amused, they form an enormous potential market for consumer rubbish. So if, like the Beatles, they can be reinvented in commercial terms, they can also be exploited. In a curious way, Hamblett and Deverson's collection of teenage statements about themselves, by simply being too long, too repetitive, too formless and often too pious, ends by being reassuring. It appears they haven't yet been sold on their own image. They are still bugged by the same old muddles, worries and distrusts as we all had: total resentment of the older generations and total determination to have done with them all (Murray Kempton once remarked that every new generation gets on in the world by parricide); total certainty that wisdom begins with them, plus an equal but opposite nervous- ness about how little they really know; hatred of growing up, of losing their wildness and sense of the present; fear of compromise, of being caught and tied to a job or a girl. In short, they are oppressed by the prospect of having to take out a mortgage on their freedom.

So we have been there before. Even the Mods and Rockers have their forebears: in snobbier pre-war circumstances they were called Aesthetes and Hearties. But Generation X has one distinct advantage over its predecessors: it is freer— financially, sexually, religiously, morally, even geographically. They are no longer obsessed by class distinctions, and intolerance is out—at least among themselves. Despite those seaside battles, there is an odd streak of gentleness in their creed:

'Teenagers—the enlightened ones—have a common hate,' writes a middle-class girl. 'They have an absolute obsessional hatred of colour and race prejudice. . .

Though this relative freedom from prejudice

is part of their larger freedom, we don't hear much about it. The only teenage quality that really seems to fascinate the outraged public is their apparent sexual freedom. From Quintin Hogg to Paul Johnson. from the TV vicars to David Holbrook, the denunciation of that is unanimous. It strikes me as utter hypocrisy. It is also inaccurate: despite those screaming Beatle fans, Generation X is no more sex- conscious than any previous set of teenagers. No one could be more obsessed by sex`than the average public school boy. shut up in his monastery nine months of the year. But for him sex means masturbation fantasies or furtive, guilt-ridden perversions. The modern teenagers simply go to bed together. This may produce all sorts of difficulties—illegitimacies, abortions, premature marriages, premature disillusion—but at least the kids try to face them, however inade- quately. I can't believe that the rest of us have gained much by postponing them. My own generation, for instance—ten at the start of the war—grew up too late: solemn as owls in our austerity- teens, soberly intense in our twenties (remember the Movement?), and a good thirty before we achieved delinquency, or had it thrust upon us. Yet when this happened there was no lack at all of socially accepted ways of expressing it. After all, in its sexual mores London is a frontier town—as wide open as Anchorage in the gold rush. Its promiscuity makes most other capitals—New York, Paris, Stockholm, even Warsaw-Hook like seventeenth-century Salem. And I am not referring to Bohemian circles, which tend to be drably domestic, though un- married. On the contrary, the smarter the set, the freer and less particular the sex. 'Can you blame a bloke for trying to get birds?' asked a Mod who had fought in the Battle of Margate. The Battle of Profumo was fought with the same war-cry.

The French, who are supposed to know about these things, have an adage : Si jeunesse savait, si vieillesse pouvait. But between the two is a group who both know and can, and they noW seem to be calling the Social tune. The best and most disturbing interview in Generation X is with a young, pretty and very expensive society whore—whisked abroad during the Profumo crisis—who remarked: There's so much hypocrisy in London society, so much social bullshit, that the ponces are bound to flourish. I tell you, as a girl who has made her way in these social circles, I'm part of

• a daisy chain that stretches from Whitechapel to Kensington Gore. That's not counting the scores of stately homes in the shires.

So the real difference between the middle-aged and teenaged generations is less a question of morals than one of tone—and there the teenagers have the edge. Someone once said that after a certain age men talk about sex and think about money. Conversely, the teenagers talk about sex and think about love. They may go after the birds, but they are all hoping that the next one will turn into Miss Right. Older ornithologists know that if Miss Right does appear she is bound to be hand-in-hand with Mr. Wrong.

All adolescent revolt is an attempt to reshape the world out of an obscure understanding of their own incompleteness. Like the Beatles, Generation X has foisted the blame squarely on the stale old shams—social, sexual, racial. They may be as unsure as the rest of us were, as anxious, in some areas as frustrated, and probably no more rebellious at heart. But they are certainly freer, more careless, more independent, less bothered by rules and conventions. If they can